A new step to understand our metropolitan world

Last October 17 and 18, experts from different levels of government, academic institutions, think tanks and international organizations that work at the metropolitan scale met at the headquarters of AMVA, the Metropolitan Area of Valle de Aburrá, in Medellín, to provide inputs to the report “Global State of Metropolis”, which will be launched by UN-Habitat next year. Titled the first “Global Experts Meeting”, the encounter was convened by UN-Habitat’s Regional and Metropolitan Planning unit and counted on the representation of various metropolitan spaces analyzed through the Metropolis Observatory.

Today, metropolitan areas in the world are already part of the agenda of the United Nations, considering the estimation that by 2020 there will be 579 metropolises in which 1,880 million people will live (almost 45% of the urban population, or a quarter of the world’s population), not to mention the fact that metropolises are responsible for a large percentage of their countries’ GDP and are their economic, social and cultural centers. Recognizing the increasing importance of the phenomenon of metropolization, UN-Habitat is preparing the report "Global State of Metropolis” to be launched in 2020, five years after the Montréal Declaration on Metropolitan Areas, in order to take stock of the metropolitan reality around the world, and to address the major challenges of metropolitan management and development in terms of policy formulation, governance, planning, and financing of urban development.

With this project, UN-Habitat (with whom Metropolis recently signed a new memorandum of understanding to consolidate collaboration in areas of common interest), seeks to strengthen the knowledge and research on metropolitan subjects as well as the cooperation for sustainable metropolitan development through existing and new platforms. The 2-day meeting in Medellín served, thus, as an opportunity to know in further detail the practices from various metropolitan spaces across the world regarding the fields of metropolitan governance, metropolitan policies and legislation, metropolitan planning, and metropolitan finance.

“There are many synergies between this initiative of UN-Habitat and the work we’ve been carrying out with the Metropolis Observatory”, said Lia Brum, Metropolis Content Curator & Focal Point for Latin America and Europe, who attended the meeting by invitation of AMVA and UN-Habitat. “The metropolitan indicators launched this year provide information that could be used in the report, and their continuous revision by our members and stakeholders will help us to refine some data collection methods”, she added. Furthermore, the Metropolis Observatory issue papers were mentioned during the meeting as relevant sources of information and analysis, namely the ones about the gentrification of metropolitan spaces and financing of metropolitan public policies and services.

At the end of the meeting, a declaration was signed as the kick-off of this global process that seeks to take stock of the new metropolitan reality around the world. To give continuity to this work, preliminary conclusions of the “Global State of Metropolis” report shall be presented during the next UCLG World Congress in Durban and at the WUF-10, and the second meeting of experts is expected to take place in the metropolitan area of Guadalajara in early 2020.

You will find the presentations used during the session here:

*With information from UN-Habitat. 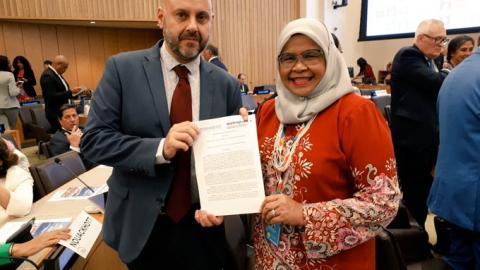 Consolidating ties with United Nations
Copyright on this site is licensed under a Commons Attribution-NonCommercial-ShareAlike 4.0 International License
Website by Punt Zero