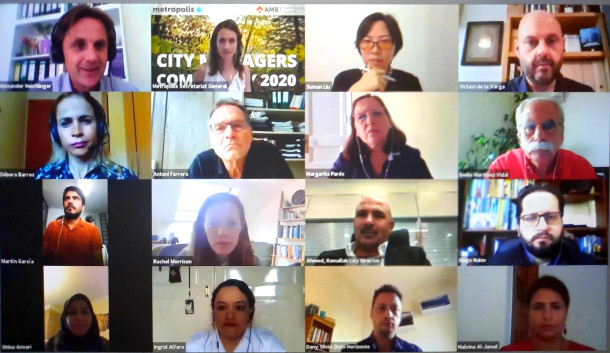 The Metropolis City Managers Community resumed its activities in 2020 with a webinar organised on 16th July, which brought together 15 top leaders from our membership who are in charge of the day-to-day management of green infrastructure. Learning about the various forms, functions, scales, and impacts that green infrastructure can have in major metropolises was the focus of the meeting, which set the path to the project’s next activities, scheduled for November.

Green infrastructure arises as a great source of innovative solutions to tackle many of the challenges that our urban societies are facing today. From better air and water quality to the control of diseases, green infrastructure has the potential to provide integrated solutions resulting in environmental, economic and social benefits. Its strategies and approaches may include a broad scope of initiatives, such as green roofs or walls, reed-beds, urban gardens and forests, ecological corridors and others, which can be implemented in combination with zoning, mobility, housing and civic engagement plans, in order to obtain optimal results. At metropolitan scales, green infrastructure can reach the magnitude required to respond to climate change emergencies and to improve the quality of life of vast urban populations.

"This is a safe environment to exchange ideas with each other”, Octavi de la Varga, Metropolis Secretary General

Exclusive to the representatives of the Metropolis membership who took part in a survey named “Green Infrastructure Metropolitan Portrait” (open from 11 June to 6 July 2020), the online session offered to a group of peer officials from Barcelona (metropolitan area and municipality), Belo Horizonte,  Bogotá, Cairo, Chengdu, Ciudad de México, Greater Manchester, Guadalajara, Madrid, Montréal, Ramallah, Rio de Janeiro, San Salvador, and Tehran, an opportunity to get to know each other for the first time, get to know the findings of the survey, and exchange information about their green infrastructure flagship projects. “This is a safe environment to exchange ideas with each other”, said our Secretary General, Octavi de la Varga, during the webinar’s opening remarks.

Alexander Heichlinger, Senior Expert and Consultant in city management who is in charge of the dynamization of all activities of the City Managers Community this year, moderated the discussion and shared the first insights from the survey, which indicated that the majority of members count on a dedicated department/unit on green infrastructure, and also on a political strategy supported by a regulatory framework to allow its implementation. Most of the participating members also indicated that their definition of green infrastructure is related to ecosystem services and natural spaces. The prevailing types of green infrastructure informed by members are fresh air corridors, parks and green spaces.

The survey also confirmed a trend already identified through our system of metropolitan indicators: that green space per inhabitant varies a lot among Metropolis members, ranging from 1 to 102,1 square meters per inhabitant according to the responses received, which refer to city, metropolitan and national scales (whereas according to data at the metropolitan scale available for 82 of our members, the range is from 91 square centimeters/inhabitant to 32 square meters/inhabitant, resulting on an average of 4.35 square meters of green space per inhabitant). The data obtained from the survey with the City Managers Community provided further insights on the distribution and location of these green spaces: in most cases, they are scattered throughout the urban territory, although in some cases, they are concentrated at the periphery. Last but not least, the survey also indicated the prominence of collaboration with different sectors of society (mostly private companies, followed by academia, civil society organizations and individual citizens) in order to develop “greener” metropolises.

The webinar also featured presentations of flagship projects by six “City managers” of the group:

Further updates and details about the next activities of the City Managers Community are soon to be published on the Metropolis agenda.