Urban areas are home to many of the environmental challenges facing the world’s population today, and the Covid-19 pandemic has highlighted the need for healthier urban environments, with better air quality and transportation architecture in densely-populated areas. For this reason, City Managers Days, a series of activities aimed at offering a chance for the Metropolis City Managers Community to meet and learn from each other, celebrated its fifth edition with a focus on the metropolitan scale of green infrastructure. 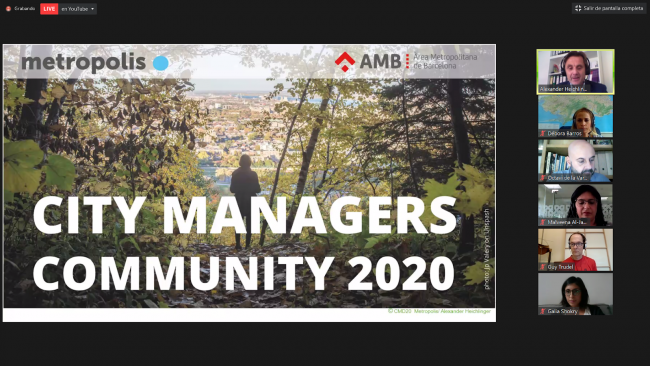 Our City Managers Community met during two events held on 17 and 18 November, though the process started with a webinar in June, to share, discuss and learn different strategies and approaches applicable to the metropolitan scale of green infrastructure, which could reach the level required to respond to the climate change emergency and improve the quality of life of extensive urban populations, while facing complex challenges.

“Due to the Covid-19 pandemic, the issue of green infrastructure is more urgent and critical than ever before”, Octavi de la Varga

Ramon Torra, General Manager of the Barcelona Metropolitan Area (AMB), highlighted the importance of working towards a greater cross-sectionality in the management of green infrastructure, and to seek shared strategic lines to increase the cohesion of spaces. Furthermore, the network of interconnected spaces that make up green infrastructure must be provided in a high quality and continuous way, he added.

Meanwhile, Malvena Al-Jamal, Director of the Health and Environment Department for the Ramallah Municipality, explained the ‘Ramallah Green Project’, which aims to bring the city towards sustainable urban development that complies with the city’s Resilience Strategy 2050. The project has developed an emergency network with key stakeholders to deal with the many consequences of climate change.

Débora Barros, Green Areas Coordinator of the Rio de Janeiro Municipality, presented their programme of environmental recovery by reforestation that started in 1984, the most successful programme carried out by the Department of Green Areas. It has a number of objectives, including increasing vegetation cover and wildlife, reducing the risk of floods and landslides, and improving the lives of residents.

Guy Trudel, Project Urban Designer of the City of Montréal, explained the Avenue Papineau project for bioretention systems. The avenue has shifted from a car dominant motorway-like avenue, to a green boulevard with massive greening at the sides and centre. In addition, Trudel described how the population and government in Montréal are increasingly in favour of green infrastructure, mostly because the benefits and consequences are increasingly visible. 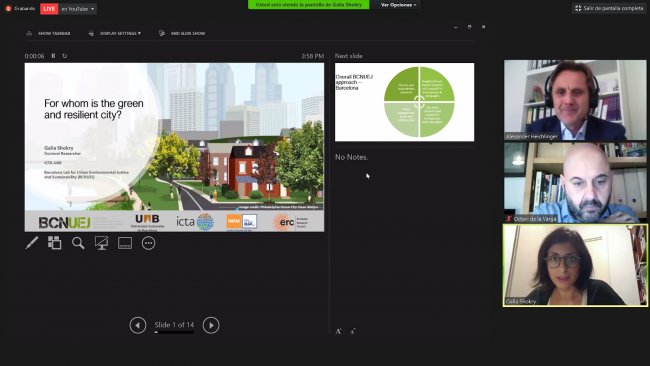 Galia Shokry, co-author of the next Metropolis issue paper, brought a different perspective to the greening issue, in which new urban greening and improvements are intertwined with other urban redevelopment activities that contribute to gentrification and inequality, as greening can be seen as an excellent opportunity to invest. Green amenities create conditions for the socio-spatial exclusion of the most vulnerable.

The session on 18 November was an exclusive members-only workshop, based around the question of ‘How can metropolitan areas optimise the development and benefits of green infrastructure?’ with three previously identified challenges. This session allowed participants to share their experiences in depth, explaining what worked and what did not.

Guy Trudel, from Montréal, and Liu Suman, Deputy Division Chief of the Foreign Affairs Office of Chengdu Municipal Government, presented solutions for the first challenge in regards to dealing with existing infrastructure and how to implement green infrastructure in areas with a high density of infrastructure and mobility pressures. Trudel complemented his speech the previous day by describing the importance of having a good plan from the beginning and explaining the benefits to citizens and politicians. At first, they had to convince the public, and now, they are asking for more. Suman shared the case of the Park City Initiative, which aims to change citizen’s minds towards healthier lifestyles, through the consolidation of green areas every 300 meters across the city territory until 2030. Although some facilities and infrastructures could not be changed, they were made greener.

The second challenge was focused on tackling and adapting to climate change. Morrison, from Greater Manchester (GM), explained a model with a science-based approach that showed that if GM increases green infrastructure by 10%, temperature rises would be maintained around the level of 2000. Frederic Ximeno, Environment and Urban Manager at Barcelona City Council, highlighted the importance of knowledge and keeping up to date in order to refine the process. Greening must be functional and easily accessible to the population, and has to be implemented in conjunction with other policies.

With regards to the third challenge for improving metropolitan governance, Emilio Martínez Vidal, Senior Advisor of the Strategic Planning Directorate of the Madrid Municipality, drew attention to citizen participation and public-private collaboration as well as European programmes that are an important source of funding. In addition, he spoke about the need for an alignment between political and technical objectives. Ingrid Alfaro, Head of the Environmental Unit of San Salvador, highlighted the need for constant evaluation and regular meetings with mayors to improve their approach to greening. Maritza Hernández, Green Infrastructure Director of CDMX, presented the case of the Green Infrastructure Plan, which was a collaboration between private companies, government and academia. It is a project that changes the usual paradigm.

The solutions that received the most votes were Chengdu and Greater Manchester, followed by Barcelona.

Although City Managers Days 2020 has drawn to a close, it has by no means finished. Metropolis continues to work not only on green infrastructures, but also on the core issues that were mentioned during these two sessions. Let’s see each other next year, hopefully, face to face!