In the pandemic, cities must ‘do everything in our power’ to help vulnerable residents, says Montevideo’s mayor

Being a big-city mayor during the Covid-19 pandemic, on the frontlines of so much hardship, may be one of the toughest jobs in government today. That didn’t stop Montevideo’s Carolina Cosse from seeking it out, right in the middle of the crisis.

Cosse, an engineer who once led Uruguay’s largest telecom firm, won election in September of 2020 with a promise to focus on helping the city’s poorest and most vulnerable residents. She’s stayed true to that pledge since taking over at City Hall.

“The most disadvantaged population without formal employment or with precarious jobs is faced with the dichotomy between work and health,” Cosse says.

“This is where we must assume our role as governments, take responsibility, and do everything in our power to mitigate the adverse effects of the crisis.”

The cornerstone of Cosse’s pandemic response is a plan she calls ABC (Apoyo Básico a la Ciudadanía, or Basic Support to Citizenship). It’s a critical safety net for thousands of people suffering the worst of the pandemic’s health, economic and social impacts. The plan is focused in five areas: creating jobs, improving housing, distributing food, promoting gender equality, and boosting health.

“Citizen participation is fundamental at this time to reach those who need help most.”

Through ABC, the city administration has put 2,000 residents to work in temporary jobs cleaning public spaces, and created tax incentives for private employers to create more jobs; purchased more than 570 tons of food distributed at 278 public kitchens across the city; and paved streets, built recreation spaces, and installed many other public works projects in vulnerable neighborhoods. 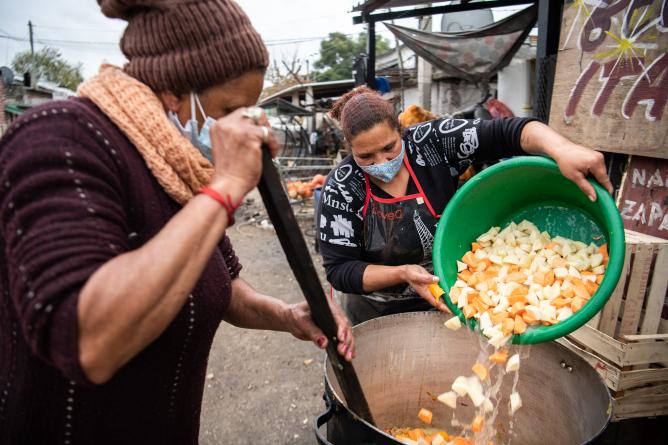 Specific projects are chosen by residents themselves, to make sure the work is responding to real needs in the community. “Citizen participation is fundamental at this time,” Cosse says, “to reach those who need help most.”

A special focus of the ABC plan is combating domestic violence towards women, which spiked during lockdown. Cosse expanded an existing network of women’s shelters known as Comuna Mujer. She added two new shelters in areas with high demand, increased the operating hours, and added legal supports to help women seek divorce or child support, for example. She also created a mobile team to go out into neighborhoods to offer a lifeline to women who didn’t already know where to go to access these services.

Mobile services — meeting residents where they live — is fundamental to Cosse’s approach to serving residents in the pandemic. It’s proving particularly successful in the campaign to get residents vaccinated. While Uruguay’s national government takes the lead on vaccine distribution, Cosse offered the city’s neighborhood clinics as vaccination centers, particularly in vulnerable neighborhoods. The city’s mobile health vans go out into neighborhoods offering vaccinations, and elderly and disabled residents have taken advantage of more than 1,600 free taxi rides to get to vaccination clinics. It’s working: 76 percent of Montevideo residents have received two doses of vaccine, among the highest rates in the world.

“These actions cannot be taken only by the departmental government”

Cosse believes collaboration across jurisdictional boundaries has been key to her city’s successes. “These actions cannot be taken only by the departmental government,” she says. “It is necessary to convene a great space for dialogue, with the participation of all levels of government, without distinction of political parties, representatives of the scientific community, and civil organizations to seek together the best solutions to this crisis and leave no one behind.”

Still, she adds, it has been a challenging and consequential time to be a public leader. “The most surprising thing has been how the world we live in has changed so drastically in such a short period,” she says. “One year represents a tiny percentage of the history of humanity. However, we are living through changes that will mark the future of humanity. The way we relate to each other, the way we work, the way we communicate, even things as simple as going to the supermarket, will no longer be the same.”

As part of a series of interviews with mayors of leading global cities and regions, we spoke with Montevideo Mayor and Co-President of Metropolis, Carolina Cosse, to find out how Covid-19 is affecting her city and its residents.

These interviews are published in partnership with Cities Today.

This article was originally published on Cities Today.