Culture as an essential tool for rethinking our metropolitan spaces

A transnational group of over 20 cities and 50 contributors has started an initiative supporting the right to participate in cultural life as a condition for a better society. The main achievement of the project so far is the “2020 Rome Charter”, led by the city of Rome and the UCLG Committee on Culture. A conference for this culture charter will be held in Rome from 1-3 October 2020, and in preparation for the event Metropolis organised an online debate, titled “Culture as a dimension to rethink metropolitan spaces”, on 28 September. The discussion provided participants with input and key drivers regarding culture and its impact in people’s lives in the metropolis.

The 2020 Rome Charter is the result of a process of reflection on people’s participation in cultural life at local level, in the belief that commodification and economic priorities pose a threat to equity, justice and human dignity. “The Charter literally points straight to Article 27 Universal Declaration of Human Rights; it tries to define the essential elements involved in fulfilling the right to freely participate in the cultural life of the community[...] It also introduces the obligation for cities to remove any obstacles that stand in the way of fulfilling that right”, declared Luca Bergamo, Deputy Mayor of Rome, during the webinar. 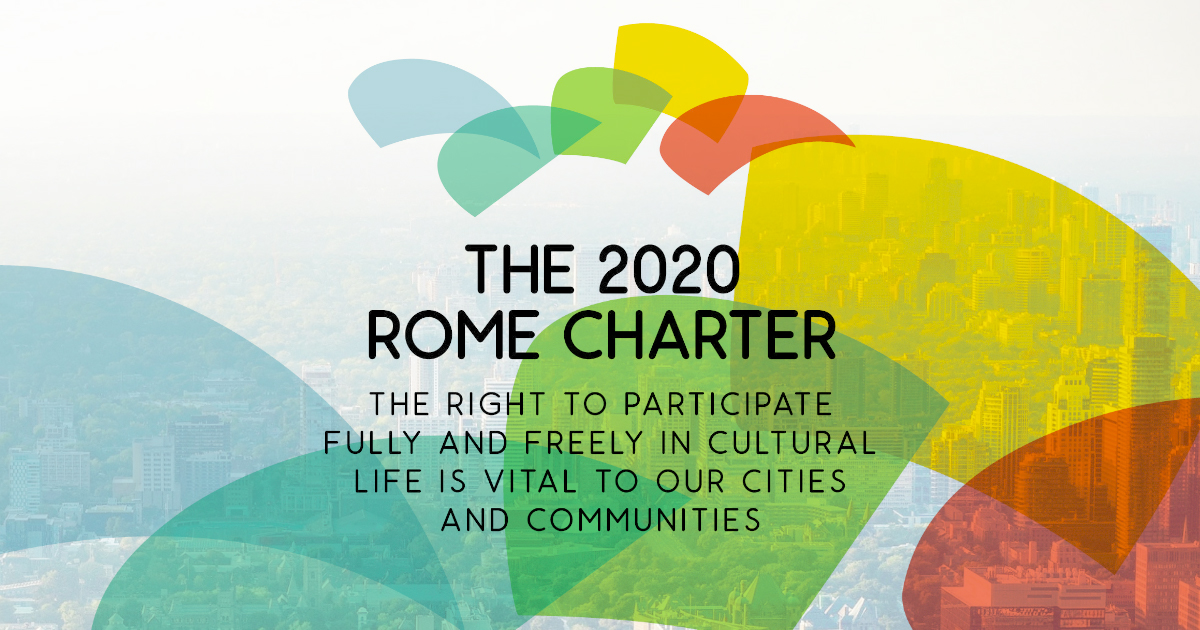 With this in mind, during the aforementioned webinar participants discussed the role that culture plays in improving people’s quality of life in metropolitan areas, recognising that culture is a right, as well as an “essential tool when rethinking metropolitan spaces both from a social, economic and sustainable perspective", said Octavi de la Varga, Metropolis Secretary General.

Enrique Avogadro, Minister for Cultural Affairs for Buenos Aires, pointed out that: “culture is much more than entertainment, it is a tool for people to develop, both individually and collectively, as it helps us build our identity. It is indeed essential and it is a fundamental tool for societies that, as a result of the COVID-19 pandemic, will be worse off than they were before, with higher rates of inequality.” He went on to add: “The pandemic has accelerated the way we access and consume culture via technology. This leads us to redefine access to culture and to introduce hybrid models in which it is possible to reach a larger audience through technology[...].”

Avogadro also pointed to the relationship between culture and public space, and advocated for the introduction of small format events over large gatherings, “taking advantage of and promoting public spaces in different neighbourhoods of the city, in the hope that the changes will be permanent, and where the city and culture are integrated”.

Wang Chenjia, Dean of the Intercultural Research Institute at Northwestern University, Xi’an, also made reference to technology and public space, arguing that “The COVID-19 pandemic has shown the role technology plays in ensuring citizens have free access to culture".

As for Dani Granados, Representative for Cultural Rights, Barcelona City Council, culture is also a resource for other economies or markets, such as the relationship between culture and tourism. Another example could be how culture has historically been a resource to promote urban development. Granados highlighted that, “In Barcelona we believe that culture is a tool to strengthen social capital [...] Barcelona faces many challenges, one of which is not allowing its scope as a city and its metropolitan and cultural scale to be lost as a result of the dimension of its territory".

To conclude, Jordi Pascual, Coordinator of the UCLG Committee on Culture, envisaged the pandemic “as an opportunity to analyse who participates in cultural life, and to put people who live in cities and metropolitan areas at the centre of all cultural policies".

In summary, Metropolis provided the 2020 Rome Charter with a perspective on the challenges and opportunities for ensuring quality of life in metropolitan areas through a debate attended by over 150 participants, including some of our members and signatories of the Charter: Buenos Aires, Barcelona, Montreal and Xi'an.

Did you miss the webinar? You can watch the full debate by clicking here.