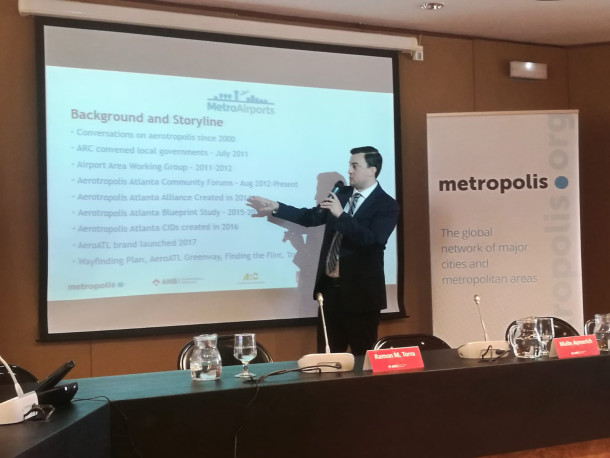 Beyond aviation: planning and governance approaches for the development of areas surrounding airports

How do you approach land planning in such complex and fragmented institutional landscapes like airport areas? How to build a shared vision for the long-term development among all the stakeholders involved in those areas? How to make airport areas more attractive? Those are some of the questions tackled by the Metroairports pilot project and that are summarized in the report that was released last March 29th. Based on the experiences and inputs from Atlanta, Barcelona and Île-de-France, this pilot project investigated, between 2017 and 2019, the interactions of airports within the territory where they are located.

The report shows the results of the case studies of four airport areas (Barcelona-El Prat, Atlanta Hartsfield-Jackson and Paris Charles de Gaulle - Paris Orly) that were carried out from a team of economists and urbanists experts from the administration of these metropolises.

Integrating airports and airport cities to a broader metropolitan scale

Airport area planning experts recommended that integrated land planning should be prioritized in order to facilitate the coordination of infrastructure planning, the integration of the airport and airport cities on a broader metropolitan scale. It was also found that as airport areas are becoming more appealing locations for distribution centers and logistical operations, appropriate planning and connections to freight areas should be encouraged. Governance of an airport area should be the fruit of partnerships the area stakeholders and should not be limited to marketing the airport and airport city, but aimed at building an integrated vision for an extended airport area.

Another important finding was that the matching of airport related employment opportunities and job seekers in airport areas could be improved greatly. Provision of public transport links between residential and business areas in airport areas is critic in that sense while schemes should be implemented to enhance the visibility of employment opportunities in the airport area and bring them closer to the communities around the airport.

The presentation of this report was part of the program of the last workshop of the Metroaiports pilot project which took place in Barcelona from March 28th to March 29th. Find more recommendations and conclusions here.