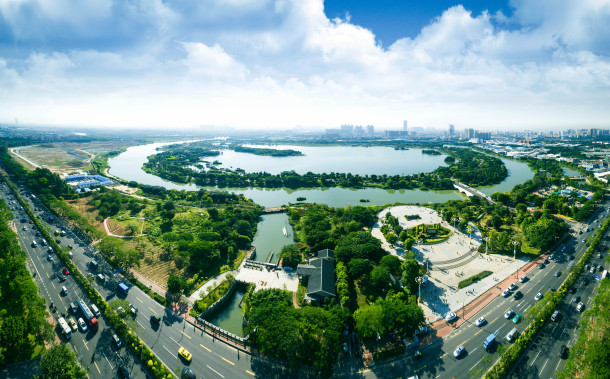 Urban innovation, an ally in the reconstruction of our cities

The Guangzhou Award is held every year to recognise a wide range of urban innovation projects that aim to improve social, economic and environmental sustainability in cities and regions worldwide, in order to advance the prosperity and quality of life of their citizens. This year the award seems to be more pertinent than ever, given the urban creativity and innovation that has emerged during the Covid-19 pandemic. Under the framework of the UCLG World Council 2020 and together with Guangzhou City, on 11 November we coorganised the Guangzhou Side Event: ‘Urban Innovation During the Covid Times’ to discuss these new urban innovation trends.

"The awards have kept evolving from the beginning (...) it’s about connecting actors, ideas, developing knowledge on the basis of the initiatives awarded, and trying out new ways to do things!", Octavi de la Varga

As remarked in the opening session by Emilia Saiz, Secretary General of UCLG, the transformation we are experiencing has taken place in areas that had already been identified and awarded by the Guangzhou Award in previous years: the different relation we need to have with our planet, or a new kind of multilateral system. Metropolis Secretary General, Octavi de la Varga, added to this: “The awards have kept evolving from the beginning (...) it’s about connecting actors, ideas, developing knowledge on the basis of the initiatives awarded, and trying out new ways to do things!”

“We have received applications from more than 200 cities in over 50 countries”, Gao Yuyue

Deputy Secretary General of Guangzhou Municipal Government, Gao Yuyue, had the opportunity to explain how the Guangzhou Award was launched to promote urban governance and innovation, and the main objective of implementing the New Urban Agenda and achieving the SDGs; so far, it has been a success. “We have received applications from more than 200 cities in over 50 countries”, he pointed out.

The second part of the session involved a panel discussion moderated by Nicholas You, Executive Director of the Guangzhou Institute for Urban Innovation (GIUI), and featured participation from panellists to address three key issues.

Firstly, Covid-19 has exposed vulnerabilities in terms of urban inequality, as well as the fragility of our health care systems or our lack of preparation in terms of information and decision making, as highlighted by Jose Siri, Senior Science Lead – Cities for the Wellcome Trust’s Our Planet Our Health Programme.

Next, we addressed potential visions of what rebuilding cities could mean, to create an urban space that is more equitable in terms of distance, for example; recovering public space that had been monopolised by cars and returning it to citizens. Working alongside Mark J. Nieuwenhuijsen, Director of the Urban Planning, Environment and Health Initiative and the Air pollution and Urban Environment research programme at ISGlobal, we reviewed three new urban models currently on the table: the Barcelona ‘superblocks model’ to increase green space and opportunities to walk; the Paris 15-minute city model to increase mobility; and the car free cities model, with clear benefits for health.

Finally, we asked ourselves—when we rebuild our cities, what should the city do to ensure that it can recover its economy? Some interesting measures implemented in the city of Xian were shown, such as communication campaigns with the business sector to make them understand the measures taken by governments, or telephone lines for advice to companies that request it.

We closed the session by highlighting the need to add creativity to innovation and rethinking cities in a utopian way. A good example of what a post-Covid city should look like was ‘The KM0 HOUSING’ project by Spanish architect Vicente Guallart, who won the international competition for a housing project for Xiong'an New Area, near Beijing. The project defines a new standard for residential buildings in the post-Covid era and can be applied worldwide: all the flats have a balcony, green space in the centre, and access to greenhouses (up to 10,000 inhabitants can be self-sufficient).

The 5th Guangzhou International Award for Urban Innovation will take place during the Metropolis 13th World Congress in May 2021 (tentative date to be confirmed) in Guangzhou.