The metropolitan faces of WUF10

Between past February 8 and 11, 23 of our members, as well as partner organizations, actively participated in the 10th World Urban Forum (WUF10) in Abu Dhabi, which had the theme “Cities of Opportunities: Connecting Culture and Innovation”. Organized and convened by the United Nations Human Settlements Programme (UN-Habitat), the World Urban Forum has become the premier international gathering for exchanging views and experiences on urban challenges. The inclusive nature of the Forum, combined with high-level participation, makes it a unique United Nations conference and the premier international gathering on urban issues.

In addition to the World Assembly of Local and Regional Governments, 20 sessions counted on the leadership and participation of Metropolis' members and partners. Here you will find a summary for most of them:

14:00 - 17:00 | Global State of Metropolis - experts group meeting #2
Representatives from the Metropolis membership (Bamako, Barcelona metropolitan area and San Salvador) and from the Secretariat General are part of the group of experts that are contributing to the elaboration of the report "Global State of Metropolis", to be published by UN-Habitat next October. This meeting gave continuity to a process initiated last year in Medellín and served to define the conceptual approaches, methodologies, contents, case studies and inspiring experiences for structuring the publication. It also marked the beginning of a closer collaboration of UN-Habitat's Regional and Metropolitan Planning Unit and Metropolis, which will provide inputs to “Global State of Metropolis” through the metropolitan indicators and cases from the use platform.

12:30 - 13:30 | Strengthening metropolitan governance: strategies & tools to build a more equitable public space
This side-event was the opportunity to discuss strategies and tools carried out by Barcelona metropolitan area, Brussels and Tehran to build more equitable public spaces. “Public space is where the right to the city becomes tangible”, said the Secretary General Octavi de la Varga, who moderated the conversation. Ms. Elisenda Alamany, Councillor of the Barcelona Metropolitan Area, gave examples of public spaces designed with women, children, people with disabilities, which respond to the needs of our diverse societies and connect metropolitan territories. “Gender perspective is crucial”, she stated. Ms. Alamany was followed by Mr. Pascal Smet, State Secretary of the Brussels Capital-Region, who showed how the identity of a city is defined by the balance of buildings and public space. “It's the living room of everyone, it's the place to build trust between people”, he said. Finally, Ms. Elham Fakhari, Councilor of the Tehran Municipality, presented the innovative case of shelters for homeless women. All panelists agreed that public spaces that restrict the circulation of private vehicles are beneficial for citizens. 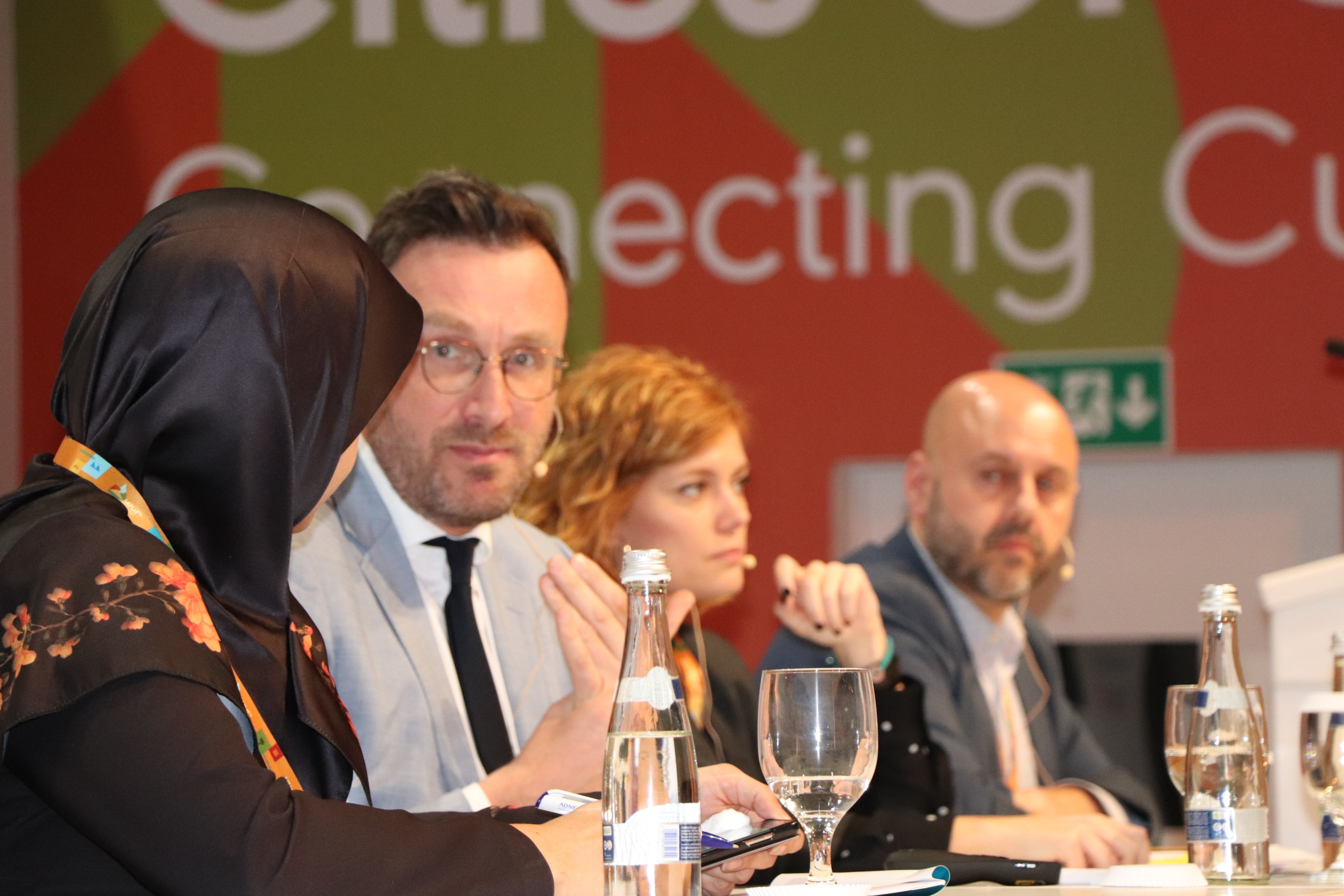 14:00 - 16:00 | Beyond the metropolis: inspiring and innovative initiatives to strengthen territorial management in worldwide metropolises and regions
Organized by the global network of Metropolitan and Territorial Planning Agencies (MTPA), this networking event counted on the participation of the Metropolis Secretary General and representatives from our membership - Barcelona metropolitan area, Gauteng, San Salvador, and Tehran. The debate revolved around the process of institutionalization of metropolitan authorities, which, according to Octavi de la Varga, is much related to the balance of political powers, to embracing shared leadership in the development of a common territory. Ms. Yolanda Bichara, Director of the Planning Office of the San Salvador Metropolitan Area, explained how this metropolitan authority plans and coordinates 14 municipalities, contributing  to reducing inequalities between the most and least developed cities of the territory. Elisenda Alamany, from the Barcelona Metropolitan Area, stressed the importance of working not only on hard infrastructures, but also on "soft policies" such as education, culture, innovation, transparency, to have an impact on the everyday life of metropolitan citizens. Mr. Hossein Yousefi, Deputy of Science and Technology of the Tehran Municipality, mentioned the challenge of adapting metropolitan governance frameworks to the different contexts of complex land management in his country. “Metropolitan spaces are the disruptive element in local and regional governance, requiring political will, leadership and generosity”, concluded Mr. de la Varga.

09:00 - 10:00 | Innovation and culture in bridging social, economic and spatial divides
This session invited representatives of cities that participated in previous editions of the Guangzhou International Award for Urban Innovation to present how a culture of innovation can help local governments and their partners to bridge social, economic and spatial divides. Among the highlights, there were the cases of our members Kazan and La Paz. Kazan was shortlisted in the awards last edition (2018) because of social, cultural and educational initiatives that unlock the potential of its multiethnic population and foster development in interfaith harmony. La Paz, in turn, won the award in 2016, and since then has been building on the legacy of the Zebras project, which started with punctual traffic interventions with youngsters and became a comprehensive citizen culture policy. “The Guangzhou Award is not only an award, it is a learning process that goes far beyond technological innovation. It is about sharing the creativity from local governments across the world to tackle global challenges”, said Octavi de la Varga in the opening of the session.

10:15 - 11:15 |  The role of culture in livability
Organized in partnership with the Urban Research & Planning Center of the Municipality of Tehran, this session showed how the 29th largest city in the world is developing new urban projects while preserving its heritage.

11:00 - 12:30 | UNACLA meeting
The United Nations Advisory Committee of Local Authorities (UNACLA), established in 2000, is a high-level group of selected mayors and representatives of local authority associations especially chosen on the basis of their local, national and international commitment to engage in the implementation of the Habitat Agenda. In representation of the Metropolis Presidency and Co-presidencies, Elisenda Alamany, Councillor of the Barcelona Metropolitan Area, brought the metropolitan perspective to the debate, presenting the Metropolis Observatory and calling for the acknowledgment of the role of metropolitan areas in the achievement of the Sustainable Development Goals (SDGs). The meeting served as well to renew the Presidency of UNACLA. Mr. Ilsur Metshin, Mayor of Kazan, was elected President of UNACLA, opening the path for new opportunities of fruitful and open dialogues with UN-Habitat and all UN agencies.

12:30 - 13:30 | Sustainable transformation of global cities
This side event focused on the transformations that Moscow has been going through since 2010, speeding up livability in unprecedented rates. Sergei Levkin, Head of Urban Development Policy of the Moscow Government, gave the example of mobility megaprojects carried that improve existing roads (instead of creating new ones) and make new hubs of public transport, connecting peripheries and the center. “As Moscowites see the results of these projects, citizen engagement grows, with higher participation on online voting and on-site meetings to decide about the next projects for the transformation of the megalopolis”, he said.

12:30 - 13:30 | Culture and innovation in Tehran urban management
Organized by the Municipality of Tehran, this session was dedicated to the theme of culture and livability from the smart city perspective. Mohammad Farjood, CEO of Tehran’s ICT organization and Secretary of Smart Tehran Council, was one of the main speakers.

14:00 - 16:00 | Art, culture and design in creating city vibrancy and strong communities
The City of Kuala Lumpur organized this session to present the development of public spaces through community art and culture in Malaysia’s financial center and largest metropolis.

12:30 - 13:30 | Nature-based solutions at city level
The Madrid City Council convened this side event to present the project of the Spanish capital's metropolitan forest, an ecological corridor with 75km that will connect biodiversity, engage citizens and tackle climate change. The session invited other metropolises of the world to share their experiences with nature-based solutions, such as Moscow, which developed a strategy to create green recreation areas around nature protected areas, with 5.500 species, many of them red-listed. "We want Madrid to grow not only in population or buildings but in nature", said Santiago Saura, Madrid’s Councilor for International Relations and Cooperation.

12:45 - 13:45 | Institutional innovations for linking heritage and culture
The Metropolis Secretary General was an invited speaker of this session, organized in partnership with India’s National Institute of Urban Affairs (NIUA). It was a dialogue between the Centre for Heritage, Environment and Development of the city of Kochi (Kerala) and GIZ, a service provider in the field of international cooperation for sustainable development and international education work, on how they promoted heritage and environmental conservation within the framework of sustainable urban development of this Indian city.

14:00 - 16:00 | Cities and data
This thought-provoking networking event, organized by the Gauteng City-Region Observatory, remarked the importance to combine evidence-based data with coordination of multiple level tiers in order to formulate and adopt policies that integrate data produced at city, regional and national scales, and lead to prosperity for all.

During all WUF10, at the Urban Expo, exhibition area of the event, visitors could find the stands of six of our members: Barcelona-Catalonia (as an expression of multilevel coordination, bringing together municipal, metropolitan and regional authorities), Brussels, Kazan, Moscow, San Salvador, and Seoul. These spaces provided great opportunities for a diverse audience to learn about specific metropolitan realities and local projects. For instance, on February 10, the Moscow stand was the stage for a debate on the challenges that metropolises face in order to plan more sustainable mobility systems, with the participation of Montréal.

Moreover, these stands served as the venue of fruitful meetings between the Metropolis Secretariat general team and our members. Octavi de la Varga, Agnès Bickart, Lia Brum, and Silvia Llorente, who traveled to Abu Dhabi for WUF10, in addition to covering the sessions above, held, in total, 26 bilateral meetings for members’ follow-up and for the development of new Metropolis activities and projects.