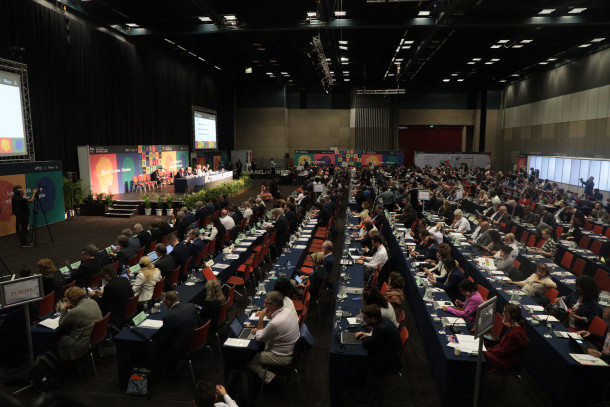 Metropolis at the UCLG Congress

Between November 11th to 15th, Durban welcomed local and regional leaders from around the globe to the UCLG World Congress. Metropolis members, staff and partners actively participated in this event, which was an opportunity for our association to strengthen connections and further advance the implementation of the global agendas. Here are the highlights of the participation of Metropolis in the World Summit of Local and Regional Leaders, day by day:

·         Dr. Wonho Kim, Director of City Diplomacy at the Seoul Research Institute of the Seoul Metropolitan Government, participated at the session “Training on Sustainable Mobility”, organized by the International Association of Public Transport (UITP). Dr. Kim presentation focused on how rapid urbanization of the Seoul metropolitan territory led its government to search for new ways to rethink the evolution of transportation.

·         The Metropolis Executive and Financial Committee meeting was the second of our statutory sessions, counting on representatives of Gauteng, Barcelona metropolitan area, Guangzhou, Montevideo, Montréal, Berlin and Dakar. The participants discussed the new call for Pilot Projects and the next elections for the Metropolis Board of Directors, both scheduled for 2020, as well as the latest updates of the Metropolis World Congress that will also be held next year, in Guangzhou.

·         Metropolis members – Barcelona metropolitan area, San Salvador and Tehran – and Secretary General staged the session “Global State of Metropolis” convened by UN-Habitat. The session generated dialogue and shared analysis on the state of metropolises of the world, advocating the importance of metropolitan management to implement national, regional and global development agendas.