As in many megacities, the rise of industrialisation has caused many issues in Chengdu, such as damage to the ecology and the environment. A “park city” might be the answer to this problem. The park city philosophy explores a future vision of cities where everyone has a good quality of life. It seeks a harmonious coexistence between humans and nature, and is a space where mountains and rivers, woods and fields, lakes and grasslands form a community of shared life.

The first edition of the webinar ‘Mapping a Green Future: Urban Planning under the Park City Initiative’ was organised by Metropolis Learning Hub Chengdu with support from the Chengdu Institute of Planning and Design, and was held on 20 and 21 May. The webinar was divided into two sessions, in which participants were able to learn from experiences from Glasgow, Chengdu, Seoul, Johannesburg and Dujiangyan.

The first session started with an opening address by the moderator Agnes Bickart, Senior Manager for Institutional Relations & Asia Portfolio, and Wu Zhijuan, Vice Director General of Chengdu FAO. Following that, the session was divided into two main topics: the first one focused on thinking and designing sustainable urban development in a holistic and integrated way and a second one on ambitious projects to advocate green life

With this in mind, Gillian Dick, Spatial Planning Manager from the Research & Development Plan Group at Glasgow City Council, introduced the idea of “nature-based solutions”. She defined them as cost-effective solutions that are inspired and supported by nature, and that simultaneously provide environmental, social and economic benefits, while helping to build resilience.

After that, Ding Rui, Deputy Director of the Office of Technical Guidance and Quality Assessment at the Chengdu Institute of Planning and Design, presented the Chengdu Park City Initiative. As a demonstration of the park city concept, Chengdu has been exploring a green, low carbon development path that prioritises the environment. The initiative has put forward 20 planning strategies centring on 4 pillars: people, city, industry, and the environment. 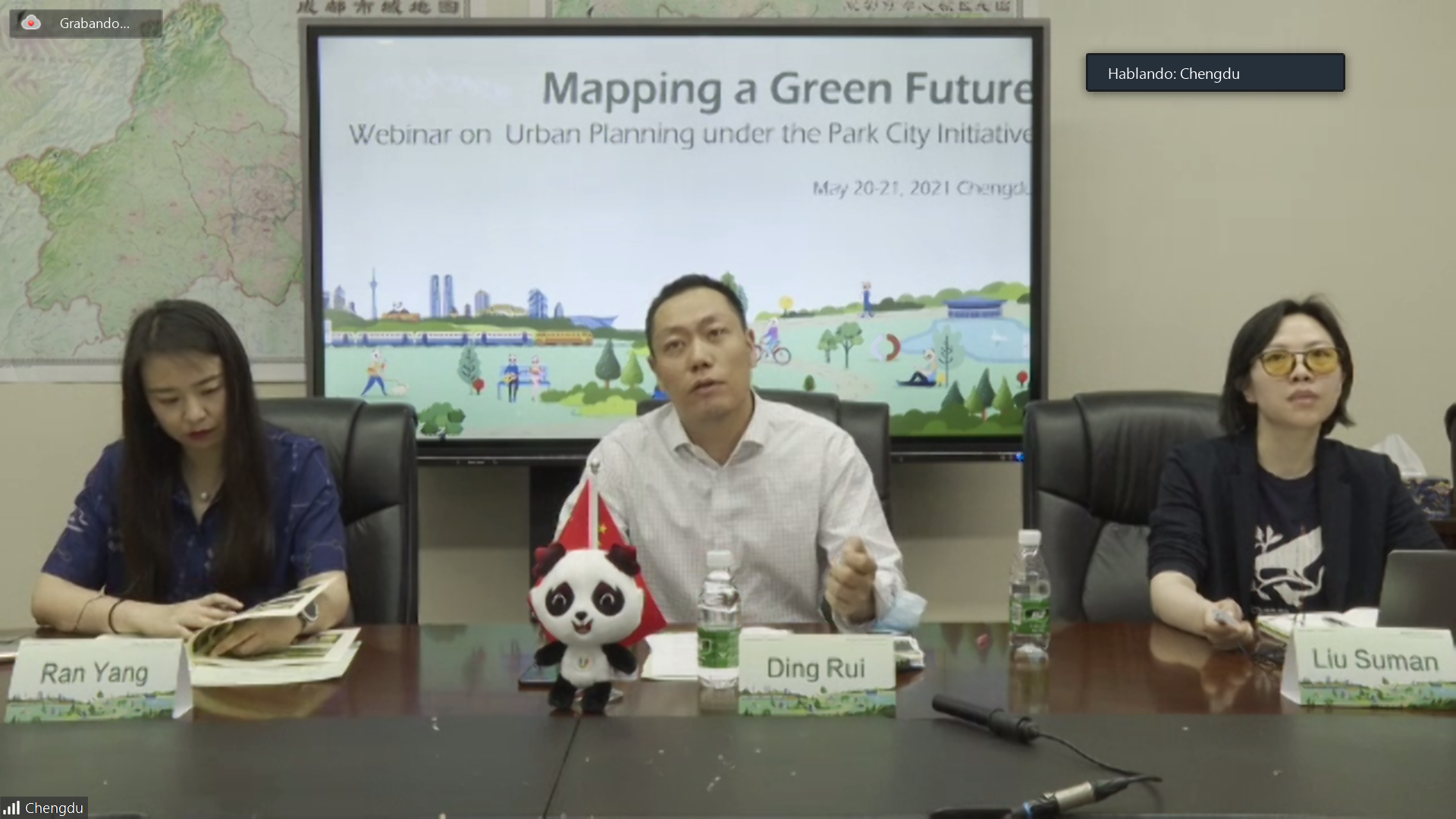 The second topic looked at ambitious projects to drive the green economy and advocate for green life. Ran Yang, Director of Greenway Project Promotion and Investment at the Chengdu Tianfu Greenway Culture and Tourism Development Group, talked about the Tianfu Greenway Project. This is one of the star projects under Chengdu’s Park City Initiative, with a planned length of 16,900 km. By focusing on these greenways together with the municipal government, the Tianfu Greenway Investment Group Ltd. is adopting a scenario-based approach to boost the economy of the surrounding areas by creating space for entertainment, sports, consumption, and more.

The second session which was moderated by Lia Brum, Researcher and Policy Officer at Metropolis, tackled two key topics-the first looked at integrated approaches to tackle urban decay and nature-based micro renewal and the second one on the making of future green communities.

Zheng Yuliang, Senior Planning Officer at the Chengdu Institute of Planning and Design, gave the first talk, focusing on the renewal of decayed industrial centres in Chengdu. More specifically, the presentation showed how integrated renewal solutions revived the declining Mengzhuiwan district—a flourishing riverside block in the 1990s that holds a lot of sweet childhood memories for many Chengdu citizens—bringing it back to life. 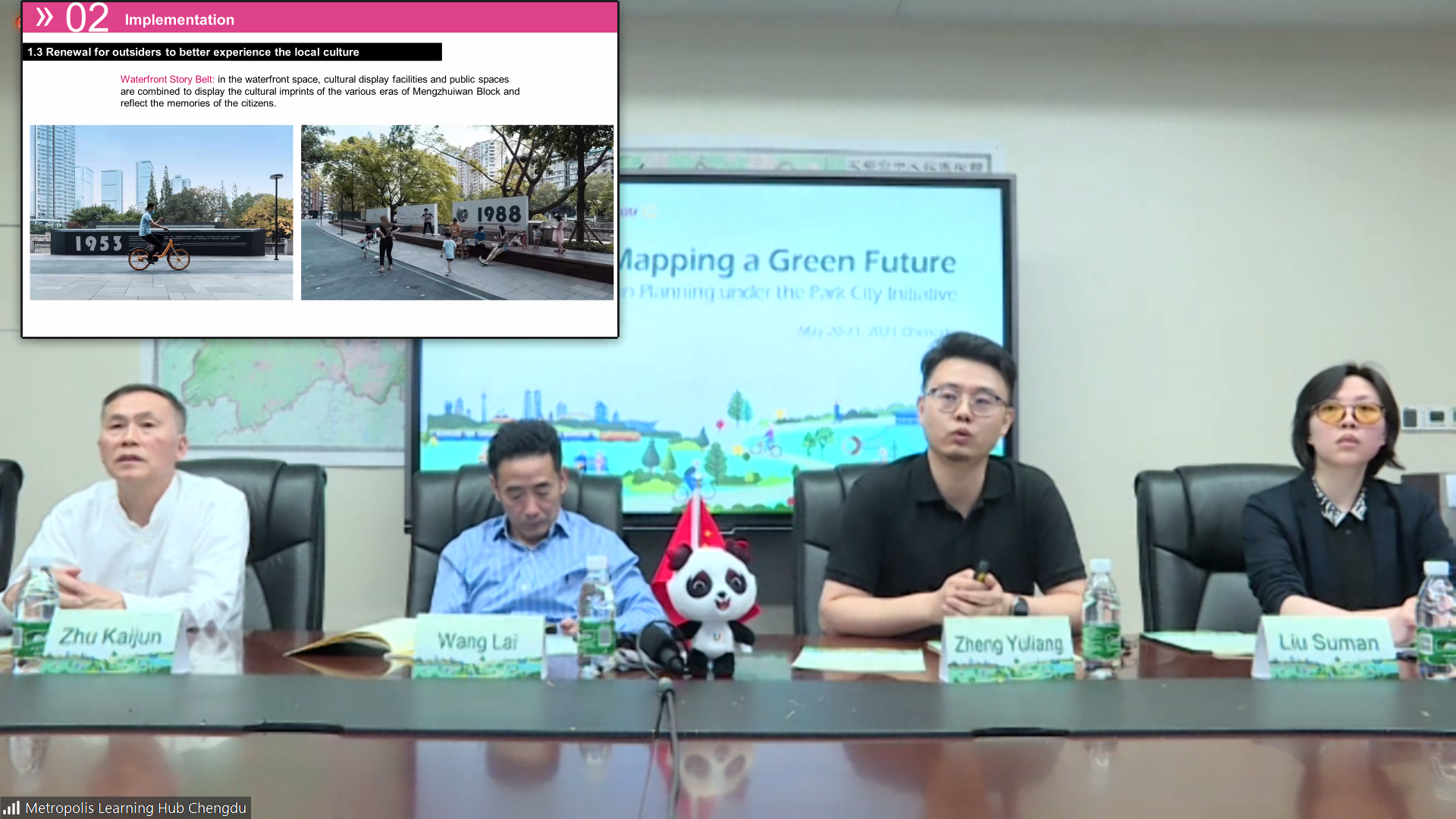 Zhang Li, Project Manager of the “Flower and Vegetable” Piying Community Renewal Project in Dujiangyan, introduced the aforementioned project. Flower Market and Shared Vegetable Fields is a micro renewal project in the Pingyi Community in the Dujiangyan county of Chengdu. Covering an area of 1.05 hectares, the mini project transformed dumping grounds in the area into a garden and vegetable fields, a small flower cultivation workshop, and an education centre for farming by adopting nature-based solutions. 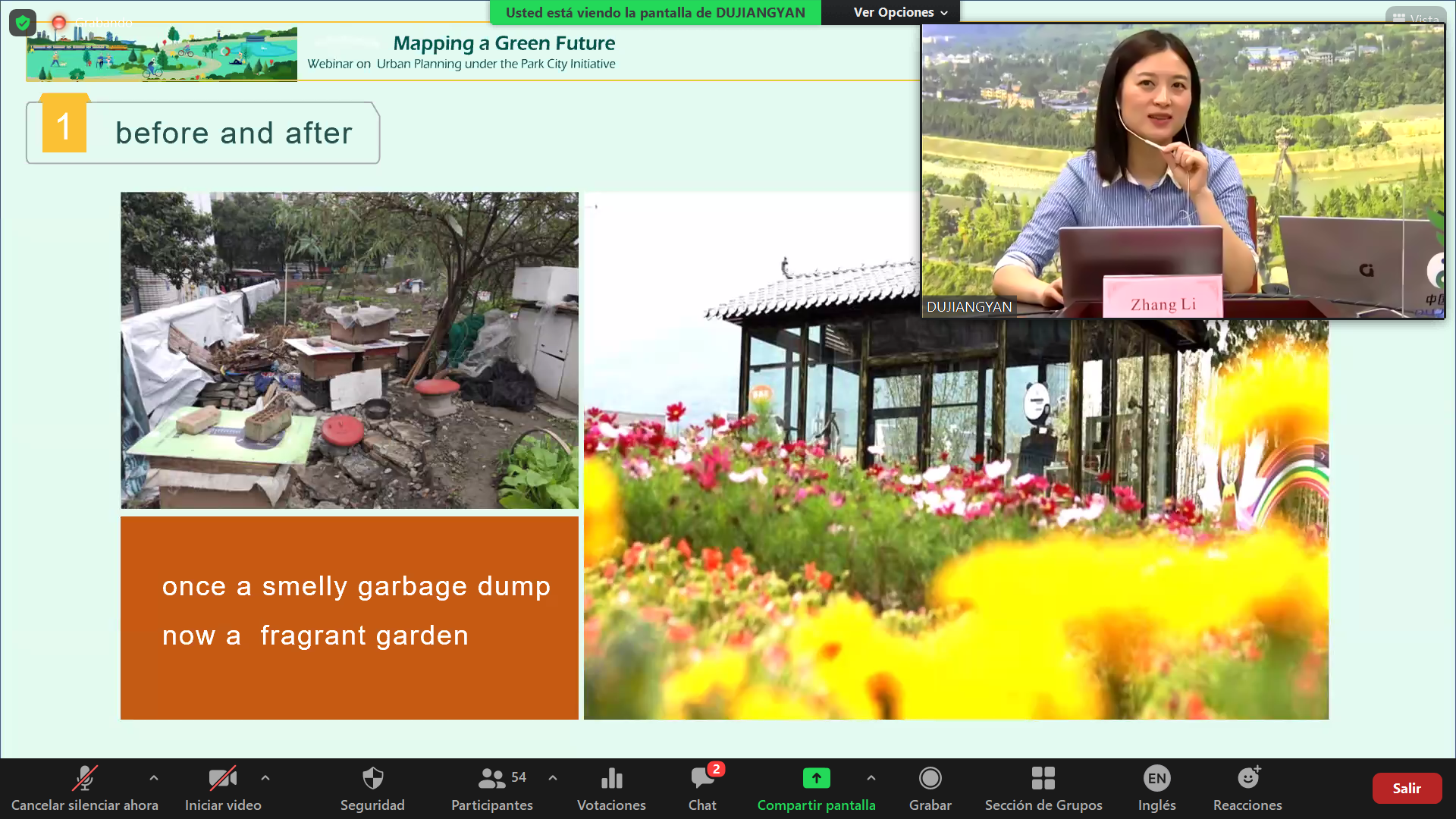 The second topic focused on building future green communities and in relation to this topic, Zhu Kaijun and Wang Lai, Volunteers at LuxLake Park Community, talked about the LuxLake Community, a future version of the community. The LuxLake Community is an apartment complex in Chengdu’s Tianfu New Area, which seamlessly integrates residential, business, recreation and entertainment areas in a lakeside environment. Its open and easily accessible water landscape and green spaces provide a variety of possibilities for community life.

Adelaide Chokoe, Arboriculturist at the Urban Forestry and Nurseries Unit at Johannesburg City Parks and Zoo, presented the Johannesburg experience. She explained that urbanisation in the city of Johannesburg has been characterised by unplanned and unregulated growth, which has led to the occupation of green spaces. With this in mind, they have had to reclaim and revitalise these green spaces. She also introduced some of the city’s greening projects: the greening of Soweto, the corridors of freedom, inner-city revitalising programmes, green belt corridors, and more.

At the end of the session, an interactive discussion was held in which the participants could give their opinions on two different topics: their favourite green space out of the ones presented, and what they would like to hear more about in the next edition of the webinar “Mapping a Green Future: Urban Planning under the Park City Initiative”.

Learn more about the Chengdu Park City Initiative on our blog.