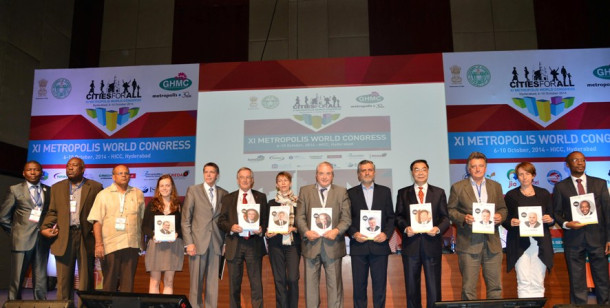 The 11th Metropolis World Congress, held in Hyderabad, ended in great success on 9 October 2014 after having drawn close to 1,800 participants from different cities around the world.

For five days, the theme Cities for All inundated the subjects of the 60 sessions held. Experts and political representatives acted as spokespeople for their respective cities to make the meetings a debate for the exchange of knowledge and to explain their experiences to the delegates present. The delegates could also choose from among 9 on-the-ground visits in one of India’s most vibrant cities, Hyderabad.

The next meeting of the METROPOLIS network will take place in Buenos Aires from 18 to 21 May 2015.

Taking advantage of the 11th Metropolis World Congress and the recently established State of Telangana, the city of Hyderabad was the first to run a hackathonin India. The outcome was a resounding success: 390 registered teams and 80 projects delivered on 15 thematic areas.

In this regard, on the occasion of the Association’s world meeting and making the most of the attendance of international delegates, 90 artists from different artistic disciplines came together for 15 days to produce a unique art collection presented by the most prestigious artists from the State of Telangana. They all joined forces to form Art@Telangana. The result can be seen at the website: http://www.artattelangana.org/.

7 October was the key day of the Congress and featured the Opening Ceremony and the political Plenary Session on the event’s general theme, Cities for All.

For its part, METROPOLIS drew a great many of its members and shared with them the different internal sessions concerning the Association’s activities, where its members took center stage.

The session “Empowering Youth to Build Tomorrow’s Major Cities”, which took place on 6 October, was used for the public launch of METROPOLIS Youth. The session was an intergenerational meeting of people from different parts of the world. It involved the presentation of the youth cooperation model drafted by Mashhad, the Iranian city which leads METROPOLIS Youth and which works in close collaboration with a group of young consultants who provide new ideas on city administration. It was also a vibrant session, with the active participation of the public, and brought together citizens and experts of all ages. With postcards illustrated by young Mashhad artists showing questions on various aspects of city life, the participants took to the stage to share their ideas on how to promote better cities for future generations. The occasion was also a great opportunity for the onsite collection of information for the questionnaire on youth participation among METROPOLIS member cities (also available online at http://goo.gl/a1zXYS).

The Board of Directors met again, its mandate ending at the end of the meeting.

The Association currently has 139 members.

When the Board meeting ended, the Extraordinary General Assembly was held and the statutes that were modified in July 2014 were approved.

A new Board of Directors was voted in by the Ordinary General Assembly of Members. Features of the new Board include its new structuring into Joint Chairs and Regional Vice Chairs and the ex officio incorporation of the President of the METROPOLIS Women International Network as a Board member.

See new composition of the 2015-17 Board of Directors here.

The METROPOLIS members who met at the General Assembly also approved the new 2015-17 Action Plan, which will be the Association’s framework of action for the three-year term.

Official launch of the Voice of Mayors| 8 October 2014

The 11th METROPOLIS World Congress was the stage for publicly launching the Voice of Mayors and to invite more members to join the project – a historic collection of first-hand written testimony from mayors or their equivalents from the world’s major cities. With initial contributions from 20 political representatives of 16 cities, a first printed edition of the publications was produced in Hyderabad.

Another activity of the Voice of Mayors project, held in the afternoon of 8 October before the General Assembly, was the informal meeting during which the political representatives of METROPOLIS member cities present at the Congress were invited to express their views on the Association’s role in the current global urban context and the renewal of its political momentum.

Following on from the 2011 Awards (Porto Alegre), the 5th METROPOLIS Awards were a great success, with 33 cities taking part and 43 projects sent to the Secretariat-General.

The panel of judges, which this year especially considered projects that integrated questions of gender and young people, the elderly and the handicapped, was comprised of representatives from the following cities:

Azza Sirry – Cairo; Professor of Urban Planning and Architecture, Director of the Urban Training Institute at Egypt’s Housing and Building National Research Institute, and Director of the MITI Regional Center for Africa and the Middle East

Following their deliberation on 10 September, the panel gave the METROPOLIS 2014 Awards to:

All of the cities that entered the 5th METROPOLIS Awards were presented with a participation diploma, awarded by Francina Vila, president of the METROPOLIS Women International Network, Antonio Balmón, Vice President of the Barcelona Metropolitan Area, and Michael Abraham, representing the Mayor of Berlin, Michael Müller. The projects are all available on the METROPOLIS website.

After their launch in 2011, the second METROPOLIS Initiatives were addressed when the panel of jurors met in Hyderabad. The panel, at the request of the coordinators who met in Johannesburg in July 2013, was expanded to include independent experts and academics in city management

The Panel of Jurors

• Prof. Azza Sirry Sadek, Professor of Urban Planning and Architecture at Egypt’s Housing and Building National Research Center and director of the MITI Regional Center for Africa and the Middle East

• León Aceves, Director-General of the School of Public Administration of the Federal District of Mexico (EAPDF)

• Xavier Tiana, Head of International Relations for the Barcelona Metropolitan Area (AMB) and former Head of the European Cooperation Office of the Provincial Government of Barcelona

The 13 new approved Initiatives were:

6 Barcelona: Using Sports to Promote the Social Cohesion and Inclusion of Young People

10 State of São Paulo: Capacity Building and Structuring of Financial Alternatives for Urban and Metropolitan Development Projects in Latin America and the Caribbean

As part of its “Integrated Urban Governance” Initiative, Berlin took the opportunity at the 11th METROPOLIS World Congress to launch a new platform which is accessible online and devoted to knowledge exchange and the creation of networks. The platform can be consulted here:

The purpose of the platform is to build a world community of knowledge concerning the challenges that major cities and metropolises face. As such, Berlin aims to develop an innovative tool that will become a recognized global source of inspiration and exchange and to foster METROPOLIS’s role as a key provider of urban knowledge.

The internal meeting of the Women’s Network, which drew eight of its 15 antennae, chose to address the Network’s future and its role within METROPOLIS, focusing on reviewing the internal organizational structure and defining the thematic areas on which it should focus.

On the one hand, it considered it interesting and appropriate to establish Network meetings beyond the annual METROPOLIS meetings in order to foster closer ties and mutual knowledge. In this regard it decided to initiate a new stage of fund-seeking.

It also discussed whether to create a directory of projects and good practices that can be consulted online and which could become a reality by drawing on the “Policy Transfer” platform launched during the Hyderabad Congress: policytransfer.METROPOLIS.org.

A new proposal for structuring the Network distributed by regions was presented and then approved by the antennae. Its main roles and functions were defined.

A proposal was made to draft a work plan for the coming years together with all the antennae which, apart from defining issues in accordance with the global gender and cities agenda, makes it possible to see a single discourse agreed on by the Network with regard to the issues that METROPOLIS addresses.

The session featured representatives from the antennae of Abidjan, Antananarivo, Barcelona, Brussels, Dakar, Mashhad, Santiago de Chile and Seoul. Buenos Aires, which had to speak at the parallel session “Urban Governance”, and Amman were unable to attend the meeting.

International delegates and local Congress attendees from Hyderabad and India attended the open session presenting the METROPOLIS Women International Network. The session was structured into two blocks: an introduction to the Network which President Francina Vila used to explain its main functions and latest activities, and another block during which Dr. Debjani Ghosh, from India’s National Institute of Urban Affairs, gave a conference entitled “Challenges for Future Networking: A Common Agenda for the Achievement of Women’s Rights”. The speech focused on four main areas: women in local government, women in politics and urban planning, empowerment and its challenges, and the main concerns for the future.

At the end of the first block, moderator Montserrat Pallarès called on the public to help in the joint construction of an agenda for the METROPOLIS Network which would set forth concerns and launch proposals and/or questions in a small-scale dynamic. This brainstorming session lasted until the end of the event.

The session opened with a few words of thanks for Mr. A. Babu, IAS Special Commissioner at the Greater Hyderabad Municipal Corporation (GHMC), who then addressed the public with words of support for the work the women do to ensure their rights are recognized.

The next meeting of the METROPOLIS Women International Network will take place in 2015 when Santiago de Chile hosts the Network’s 4th World Forum. Dates are still to be confirmed.

The Congress ended with an official ceremony on 9 October attended by the President of India, the Honorable Pranab Mukherjee, together with the Honorable First Minister of the State of Telangana, Mr. K Chandrasekhar Rao; the Mayor of Hyderabad, Sri Mohammed Majid Hussain; the First Government Secretary, Dr. Rajiv Sharma IAS; the Governor of the State of Telangana, Mr. ESL Narasimhan; the Principal Government Secretary, Mr. SK Joshi; and the Mayor of Johannesburg and Copresident of METROPOLIS, Mpho Parks Tau.
More information on the Congress and its outcomes at: http://hyderabad2014.metropolis.org/