There is something unique about hopping on the bus X1 in Barcelona, which connects the squares of Francesc Macià and Glòries across the district of Eixample: eight of the buses operating this line are electric and fuelled with green hydrogen, which means public transport with net zero carbon emissions.

Worldwide, transport is the sector with the highest reliance on fossil fuels, accounting for 37% of CO2 emissions, according to the International Energy Agency. As the climate emergency becomes every day more urgent, our metropolitan indicators confirm: areas with good access to public transport and a low percentage of private vehicles are also those with lower CO2 emission rates and better air quality.

The green hydrogen buses are an example of the bold commitment taken by the Metropolitan Area of Barcelona (AMB) towards decarbonisation, in line with the Agenda 2030 and the Paris Agreement: its metropolitan plan of urban mobility has, among many other ambitious goals, the aim of making 58% of the bus fleet composed of electric and hybrid vehicles by 2024. These goals unleash, though, a complex equation: how to finance such models of sustainable transport?

Green hydrogen is positioned as one of the most promising alternatives for the deployment of sustainable mobility. One of the first challenges in migrating to green hydrogen, however, is to make it a cost-effective option, because the initial investment to build the infrastructures of storage, production, and transport of this renewable energy is still very high. 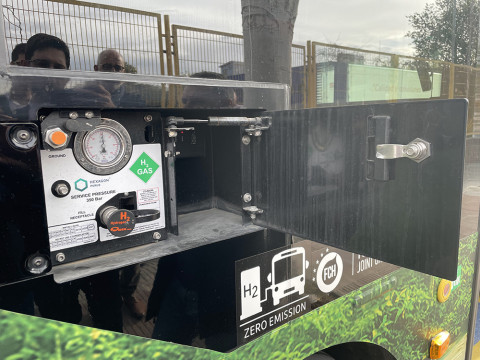 Participants learned about the functioning of hydrogen-fuelled buses during the field visit.

Additionally, public transport is a sector that traditionally struggles to make ends meet. In the AMB,  the revenues available for mobility, transport, and sustainability represent little more than 20% of the budget and are not sufficient to cover the respective expenses, which are expected to amount to almost 40% of the total budget in 2022. Furthermore, directly charging the public for the increase in costs is not an easy solution. In many cities around the world, the increase in the price of public transport has already been the trigger for several demonstrations of discontent among the population.

This challenge made AMB’s General Manager, Ramón Torra, reach out to his counterparts in other metropolises of the world, to exchange the solutions that have been put in practice so far, and find answers to questions such as: how much of the public transport should general taxpayers subsidise? Should and can user-pay models be maintained? Can win-win public-private partnerships be negotiated? Are 100% free public transport systems, or urban toll mechanisms, feasible?

“We face a complex problem, and the exchange of ideas is key to implementing short-term solutions”, said Ramón Torra last Monday, at the final workshop of the Metropolis City Managers Community, which brought together officials with expertise in transport, mobility, finance, and economic development from the metropolises of Aracaju, Belo Horizonte, Bogotá, Madrid, Medellín, Tehran, Toulouse, and Zaragoza.

The small group of 13 representatives had the opportunity to meet in person at the headquarters of AMB and share their experiences in trying to meet the goal of financing safe, affordable, and sustainable metropolitan transport. Among the ideas discussed, there was consensus on the fact that developing car-centred infrastructures is no longer a viable solution for the emergencies our metropolises are facing, and that the stability of revenues to finance public transport relies on finding new financing channels that ensure the correct distribution of costs.

In the case of the hydrogen-fuelled buses in Barcelona, the revenue stability formula has been found through a partnership with one the world's largest electricity companies (Iberdrola), which financed the construction and operations of the green hydrogen station that currently supplies the eight buses but has the capacity to eventually supply more buses, as well as private vehicles. This is a clear case of investment in a business that should become very profitable in the medium and long term. The plan of AMB, which in turn invests in the purchase of the green hydrogen buses, is to expand the current fleet from eight to 36, requiring the opening of new hydrogen fuelling stations across the metropolis.

The participants of the City Managers Community workshop last Monday not only had a chance to visit the first hydrogen fuelling station in Spain but also to ride Barcelona’s green hydrogen bus. The full day of activities was finalised with a visit to AMB Informació, the hub for information on all services of public transport in the metropolitan area of Barcelona, including not only buses and metro operations, but also shared bikes availability, the monitoring system of traffic generated emissions, park & ride systems, and more - all of which can be reached by anyone with a smartphone, with a single app, called AMB Mobilitat.

The activities of last Monday were the culmination of a process of knowledge exchange started in September this year when the representatives from the Metropolis membership joined the City Managers Community preparatory meeting. The findings of both meetings, as well as recommendations on best practices to finance metropolitan transport, will be compiled in the next Metropolis City Managers Community report, which shall be released in the first quarter of 2023.

The Metropolis City Managers Community is sponsored by: