Violence against women and girls, one of the most serious exponents of urban inequality

Violence Against Women and Girls (VAWG) is one of the most serious, and most tolerated, human rights violations worldwide. Women and girls face multiple types of violence as a result of existing gender inequality in urban areas, multiplied and exacerbated by the Covid-19 outbreak.

To mark the International Day for the Elimination of Violence against Women, Metropolis, United Cities and Local Governments (UCLG), and Cities Alliance are raising awareness on the importance of tackling violence against women and girls in urban spaces.

Under the topic “Let’s free our communities, cities and metropolises from gender violence”, we urge local, regional and national governments to integrate a gender responsive and gender-sensitive approach to all the efforts and services put in place to respond to the current crisis and towards a resilient and inclusive recovery.

“Gender-based violence is unacceptable and is based on stereotypes that have been exacerbated by the pandemic. We need to change perspectives and create new role models that inspire girls and boys. The local level needs to be the cradle of a feminist leadership, as an important catalyst for transformation for the future women and men alike” Emilia Saiz, Secretary General, UCLG

Violence Against Women and Girls takes place everywhere: at home, at work, in the public squares, parks, markets, streets, restrooms of our cities and metropolises, and on public transport , as well as in our own governments, institutions, and even online, on social media and other platforms.

According to the UN, as the pandemic deepens, economic and social stress coupled with restricted movement and social isolation measures, gender-based violence is increasing exponentially. Various reports on VAWG have detected an increase of 25%, even doubling in some urban areas and a higher risk of sexual violence. Many women and girls are being forced to ‘lockdown’ at home with their abusers while services to support survivors are disrupted or made inaccessible.

“The Covid19 pandemic has unveiled the ingrained discrimination and structural exclusion of women – as girls, in the household, the economy, in politics, and in society. For those living and working in informality, the situation is even worse.” William Cobbett, Director, Cities Alliance

Women have been at the forefront of the response to the pandemic, although they continue to be persistently under-represented in public and leadership positions around the world, at all levels, including in local spheres of government. Violence against women, grassroots leaders and elected representatives remains one of the main barriers preventing their full and effective participation to decision-making, especially in the context of the crisis.

Women’s safety is a multi-layered issue and, to really address it, interventions should tackle the underlying causes of VAWG, including gender-biased social and cultural norms. Only a gender-sensitive approach to research and analysis can provide us with the tools to promote gender-oriented decision-making, reducing inequality and, as a consequence, gender violence.

We need to rethink cities and metropolitan realities to be more inclusive and support women’s autonomy, their sense of connection to their communities, and ensure equal access to public life and basic services, making progress on the 2030 Agenda. We hope this joint action helps to turn the crisis into an opportunity to free our cities and metropolises from gender violence 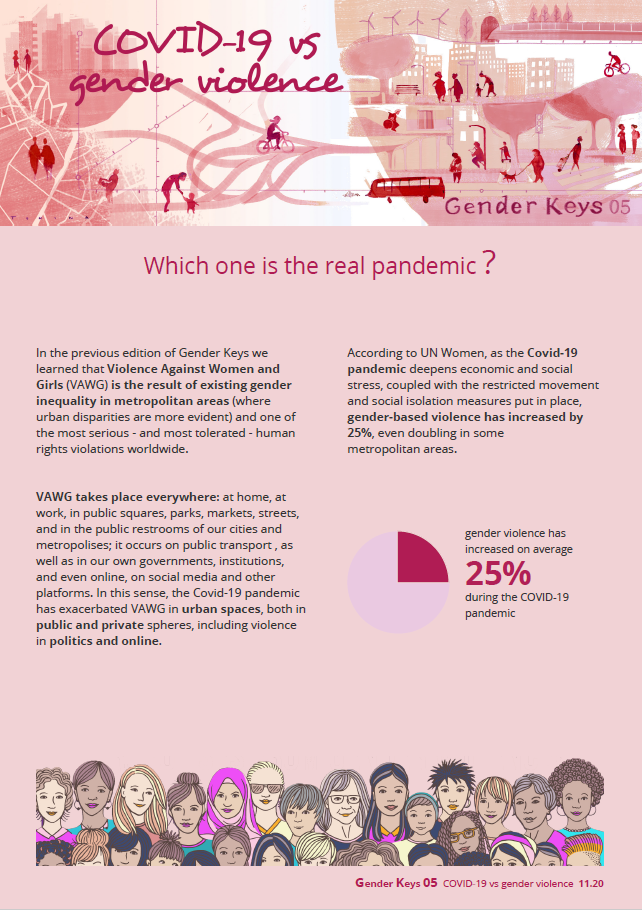