“The history of developing cities is very rich. Our legacy would largely depend on how well we keep the fabric of community in our cities. Urban Innovations are catalyst for community spirits in cities.”

This roundtable aimed at discussing and sparking new train of thoughts on how to strengthen the role of urban innovation among the city leaders, institutions and urban stakeholders, including private sector organisations. It further explored the strategic pathways for Urban Innovation Community (UIC) to provide new tools, expertise and knowledge on implementing and achieving the SDGs at the local level. Metropolis and UIC informed on its proposed work plan for 2016 as well as updated on the preparation of the 3rd Guangzhou International Award for Urban Innovation to be held in 2016.

The workshop welcomed urban stakeholders and city leaders that engaged with this dialogue in Paris and contributed towards successful planning and achievements of the 2030 Agenda. The session was conducted by Mr. Nicholas You, Adviser of Guangzhou Award and animated by Romeo Zhou Jian, representative of the Secretariat of the Urban Innovation Community from the City of Guangzhou, representatives of the Metropolis Network as the Presidency of Metropolis, Mr Henri-Paul Normandin and Secretary General of Metropolis, Mr. Felip Roca; city networks like UCLG with Secretary General Mr. Josep Roig and its sections UCLF Aspac, UCLG Mewa, UCLG Euroasia.as well  ICLEI represented by Ms. Monika Zimmermann and ICLEI with Ms. Shannon Lawrence. Several city represenattives such as the Mayor of  Bristol, Mr. George Ferguson, Medellín represented also by its Mayor, Jorge Pérez, among many others.

The roundtable was organized on the sidelines of the UCLG Wolrd Council Meetings, where the international community gathered to discuss, debate and formalized a consensus on UN Framework on Climate Change (UNFCCC), during the past Climate Summit for Local Leaders in Paris. 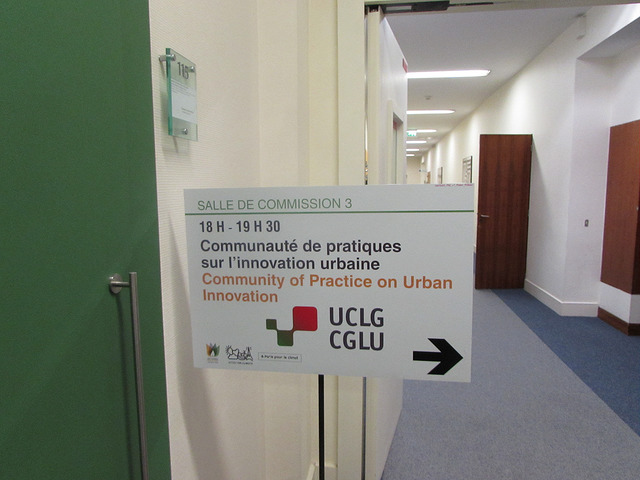