Strengthening metropolitan capacities at the WUF9

Between past February 7 and 13, our members and partners actively participated in ten events of the 9th World Urban Forum (WUF9) in Kuala Lumpur. The events covered debates on various topics, such as the impact of the gender perspective on the implementation of the New Urban Agenda (NAU), the need to develop an academic discipline and articulate different institutions to deal with the metropolitan phenomenon, and the role of local government networks and subnational observatories in the realization of global agendas. The sessions have also served to highlight innovative experiences of local governments towards the fulfillment of the right to the city of all, such as projects that promote social cohesion, civic culture and affordable housing, among other initiatives from various parts of the world.

Below we share the main conclusions of each of these events: 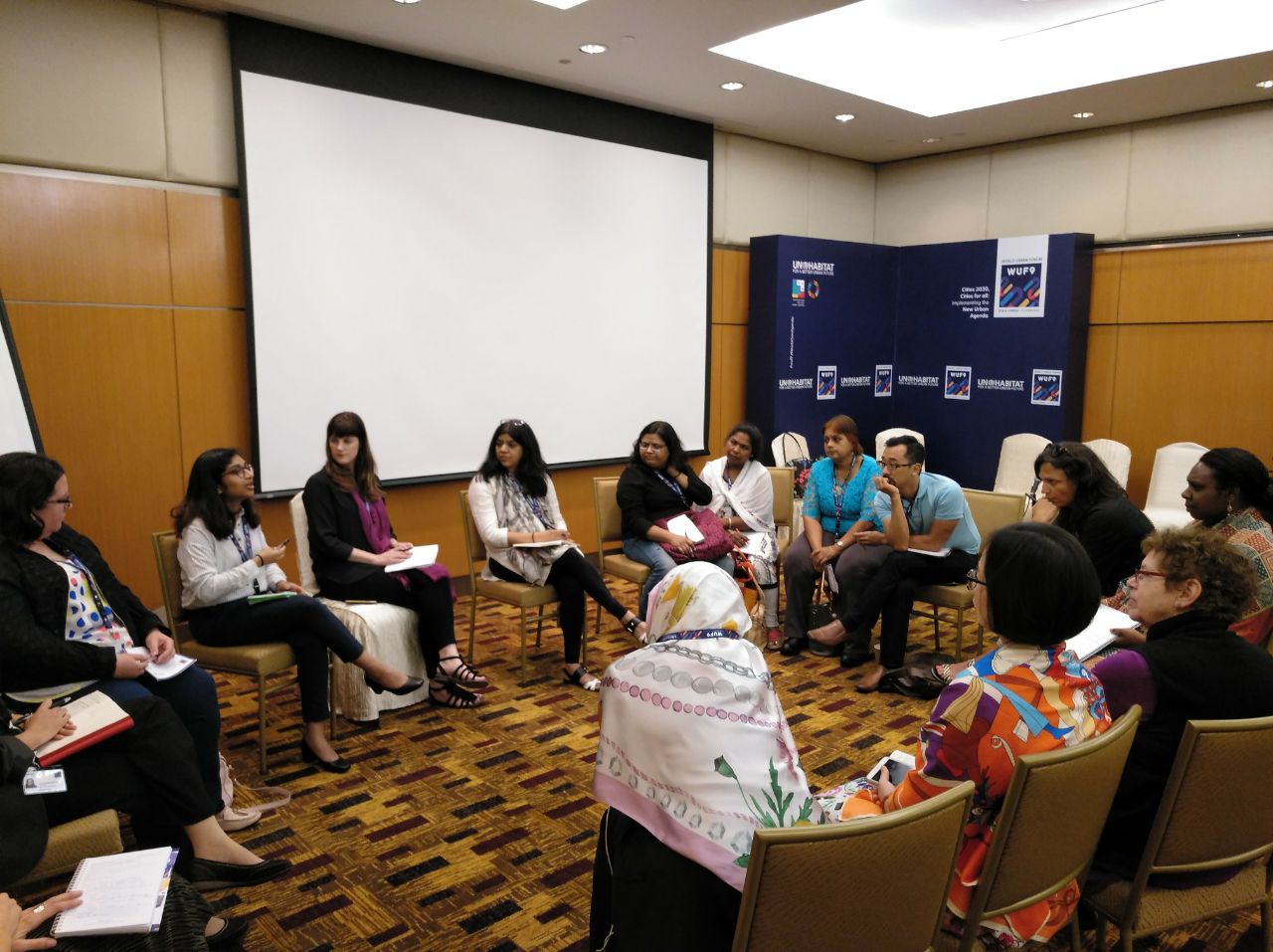 In its commitment to promote gender equality, the Metropolis Secretariat General participated in the coordination of the debate "Safe and accessible public spaces for all, including women's mobility and public transport", together with organizations of recognized prestige in the subject, in the framework of the WUF9 Women's Assembly 9. The conclusions of the debate contributed to the contributions made by the Women's Assembly to the  Kuala Lumpur Declaration.

Metropolitan policies to implement the Sustainable Development Goals and the New Urban Agenda: safe cities for women and girls

For Metropolis, safety in public spaces is considered a strategic theme in the fulfillment of the right to the city for all. Aiming at the promotion of the first conclusions of the project “Women’s safety in public spaces: mapping metropolitan policies”, the Metropolis Secretariat General organized a networking event to present related experiences identified among our members and open a space for debate to place the gender issue on the political agenda of major cities and metropolitan areas.

"That 50% of the population of our metropolises, which are women, cannot enjoy public space with the same rights, tranquility and opportunities as the rest, means that there is no real recognition of them as full citizens", stated Octavi de la Varga, Metropolis Secretary General, to open the session. He was followed by the Mayoress of Surabaya, Tri Rismaharini, who announced the initiative to install buses exclusively for women in her city, with the objective of to combat sexual violence in public spaces.

Afterwards, the coordinator of UN-Habitat’s Gender-Hub, Ana Falú, took us to a discussion table with representatives of our membership who presented metropolitan initiatives to combat sexual violence against women and girls in public space

Kathryn Travers, executive director of Women in Cities International (WICI), concluded the session by stressing that the right to the city refers to "making and developing a city that is functional for our daily lives". 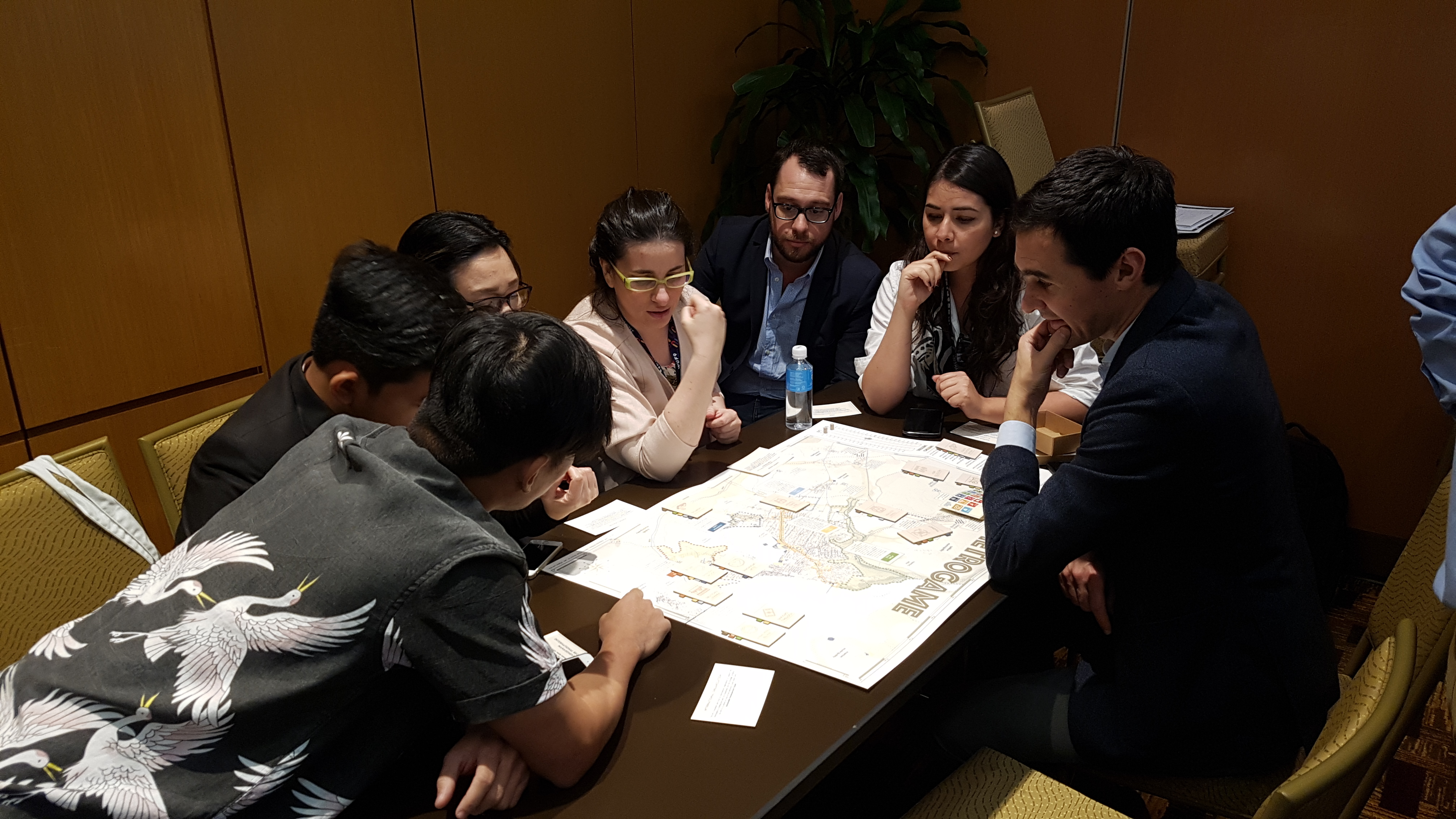 Metropolis joined the Polytechnic Institute of Milan, together with UN-Habitat’s MetroHub, the German Corporation for International Cooperation (GIZ), the network of metropolitan and territorial planning agencies (MTPA), the University of Guadalajara and the Implementation Center of Public Policies for Equity and Growth (CIPPEC), to launch a pilot training where participants were invited to a virtual game, the "Metrogame", where they represented the role of different agents of a fictional metropolitan area, as government authorities, civil society and private sector representatives, and we pushed make decisions to define several metropolitan projects. The activity was carried out with enthusiasm by the participants, who were able to understand the complexity of the management of metropolitan areas, and how their decisions influence the achievement of the Sustainable Development Goals (SDG) and the application of the New Urban Agenda.

Women’s visions and practices for the implementation of the New Urban Agenda: inclusive, equal and sustainable cities for all

Octavi de la Varga represented Metropolis in this networking event, showing our association's commitment to the New Urban Agenda, especially regarding gender equality. He highlighted the need for multilevel governance models that enhance the participation of different stakeholders and includes gender equality as a main area of development. "We must promote a more holistic engendering model of our organizations, and that is why at Metropolis we seek to act on three levels: in the same structures of the association, in the products and services that we generate and in the public policies developed with our metropolises", he stated.

Urban innovation in the implementation of the global agendas

The metropolis of Guangzhou, host of our Regional Secretariat for Asia-Pacific, organized a session on urban innovation experiences that contribute to the implementation of the 2030 Agenda, which was attended by more than 120 people.The Regional Secretary Liu Baochun reaffirmed the commitment of Guangzhou towards the implementation of urban innovation programs through the Metropolis membership, and took the opportunity to announce the opening of registrations for the fourth edition of the Guangzhou Award (Guangzhou International Award for Urban Innovation). Eugenie Birch, President of the General Assembly of Partners, added that successful experiences are emerging in cities as a result of the award. Sithole Mbanga, CEO of the South African Cities Network, explained the innovative governance practices that their members put in place to achieve the principles of the right to the city, in which the values of equity and use of local resources are fundamental. The Metropolis membership was also represented by presentations from Barcelona, ​​Gaziantep, Jakarta, Johannesburg, La Paz, Seoul, Surabaya and Tehran.

Five Metropolis members have gathered in this session to share important contributions to a central challenge of the implementation of the NUA and the SDG 11 ("sustainable cities and communities"): housing as a human right. Berlin, Buenos Aires, Gauteng, Kuala Lumpur and Montréal presented their respective policies for the development of affordable housing at the event.

Berlin has highlighted the contribution of citizen participation in the development of affordable housing projects, while Buenos Aires presented its integrated urban recovery strategy of Barrio 31, which includes including in the dimensions of social housing, education and mobility. The province of Gauteng, in turn, emphasized the challenges faced in a context of social inequality within its urban territory. The implementation of the policy "Gauteng Spacial Development Framework 2030" seeks to build neighborhoods where it is possible to live, work, study and enjoy leisure safely. Finally, Montréal highlighted the policy that requires the inclusion of 30% of affordable and social housing in all projects with more than 200 residential units, and Kuala Lumpur presented its incentives to companies promoting affordable housing, such as the authorization of residential high density buildings.

To conclude the session, Kerstin Summer, from UN-Habitat, highlighted the importance and relevance of these policy and strategy examples in the implementation of the NAU and SDG 11. Metropolis will continue this collaboration with UN-Habitat, seeking to contribute with more concrete examples put in place by our membership to face the challenge of access to housing in major cities around the world.

Subnational government global observatories and the implementation of the global agendas

Organized by the Barcelona Provincial Government, this event was an opportunity to promote new alliances between Metropolis and other organizations that also have projects of global observatories on subnational governments, such as UCLG, UCLG-Africa, UCLG-ASPAC, the International Observatory of Participatory Democracy (OIDP), the Municipality of Montevideo, UNDP / UN-Habitat / FFM and the AL-LAs Project.

These various observatories offer sources of information and databases at first hand, generating knowledge on how local and regional governments around the world are learning, adapting, applying and following up on global agendas. Their approaches reflect the perspective of local and regional governments towards an integrated vision for the implementation of the commitments established by the global agendas.

While promoting the exchange of information and methods for data collection and work practices and strategies, the session contributed to the development of capacities in the presentation of reports on the localization of the NUA and the SDGs.

Metropolis participated in the launching session of the UCLG community of practice on transparent and sustainable cities, organized by the Spanish Federation of Municipalities and Provinces (FEMP) together with UCLG, the Open Government Partnership (OGP) and UN-Habitat. Our Secretary General stressed the importance of accountability and transparency as basic elements of good governance. "And for this, leadership and political will are necessary," said Octavi de la Varga. The event also counted on the participation of representatives from the Madrid City Council, UCLG-Africa, UCLG-ASPAC, the Council European Municipalities and Regions (CEMR), Platforma and the Forum of Intermediate Cities. 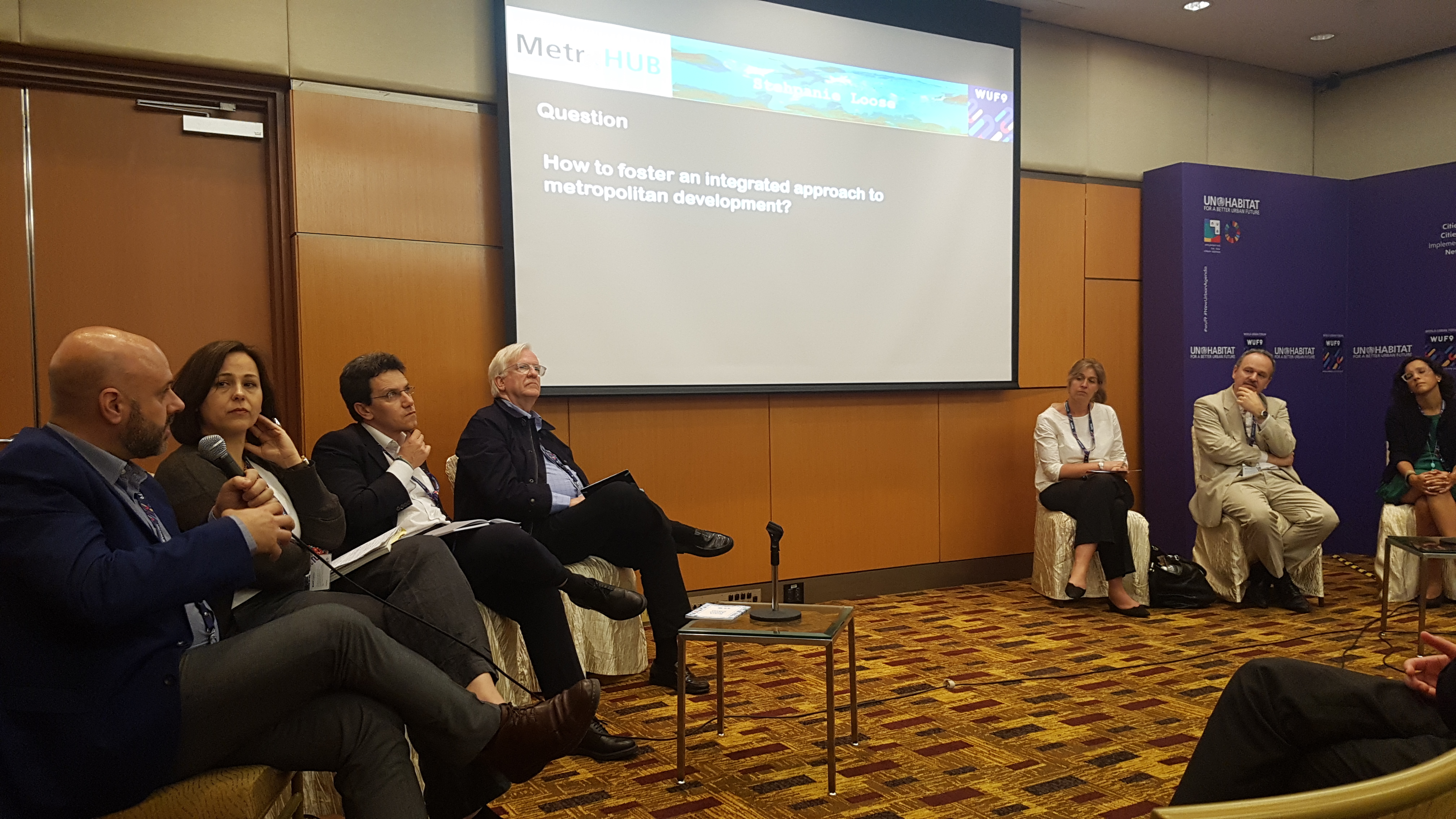 CIPPEC took the initiative to gather again Metropolis and the partners of the "Metrogame" to encourage a debate on the role of national governments in the promotion of metropolitan governance and to invite metropolises around the world to join the World Metropolitan Day campaign, which will take place from October 1 to 7.

Metropolis was represented by Octavi de la Varga and Xavier Tiana, Head of International Relations of the Metropolitan Area of Barcelona (AMB). One of the questions raised by the AMB representative was how to make the work of AMB more known to the public. One of the conclusions that came out of this session is that, in order to promote an integrated approach to the governance of metropolitan areas, it is necessary to take into account all the people and institutions that participate in the development of their corresponding territories.

Scaling up city networks for knowledge exchange at regional level

At this session, Metropolis joined the National Institute of Urban Affairs from New Delhi to highlight the role of city networks in the Agenda 2030. The New Urban Agenda (NUA) places special emphasis on the role of formal and informal networks of cities to promote exchanges of applied knowledge and facilitate bilateral and multilateral collaborations among cities and local governments. In its alignment with the 2030 Agenda, the NUA, therefore, refers to the networks of cities as important catalysts for the application of urban policies and the achievement of the SDGs.

Sunil Dubey, Metropolis advisor, emphasized local innovation and "leap frog" strategies as critical elements for the expansion of city networks to help their members and partner entities at all levels of urban environments. He offered examples of programs driven by innovation and mobile technology, which help cities and local governments to preserve valuable resources and reduce carbon emissions at their territories. In turn, Andre Müller, from Berlin, presented case studies to explain the role of Germany and the European Union in helping various urban programs coordinated by city networks.