The Social and Solidarity Economy: an opportunity for a sustainable and equitable urban recovery

Covid-19 has exacerbated and accelerated what was already visible—an unprecedented and complex health, social and economic crisis, with a greater impact on large cities. At this turning point, the Social and Solidarity Economy (SSE), offers us the possibility of creating alternatives that place people’s rights and the sustainability of the planet at the epicentre of the decision-making process. The principles of the SSE, such as fairness, environmentalism, cooperation and commitment to the environment, provide a transformative approach that not only helps meet immediate emergency needs, but can contribute to a more sustainable and equitable post-pandemic urban context.

In this sense, the Respond, Rebuilt, Reinvent project, part of the OECD’s “Promoting Social and Solidarity Economy Ecosystems” Global Action funded by the European Union, explores how SSE ecosystems can play a critical role in helping local authorities respond to the challenges posed by the Covid-19 outbreak and subsequent recovery. The SSE proposes a possible strategic framework to reactivate production, exchange and consumption relations based on solidarity and cooperation, oriented towards the search for solutions to social challenges in line with the Sustainable Development Goals (SDGs). The Covid-19 pandemic provides an opportunity for cities and metropolitan areas to develop recovery plans that reverse current trends and shift our consumption and production patterns towards a more sustainable future.

In this context, on 29 June, the RRR consortium met with representatives from the 9 cities selected through the RRR Call for Peer Cities organised in April. The main objective of this first meeting between Peer Cities was to exchange ideas and select two Covid-19 challenges to be the focus of the next steps of the project. The Respond, Rebuilt, Reinvent project seeks to explore how to improve cross-sectoral collaboration within SSE ecosystems in the selected areas, while trying to find specific solutions and social innovations provided by SSE ecosystems and social enterprises in relation to the two selected challenges. 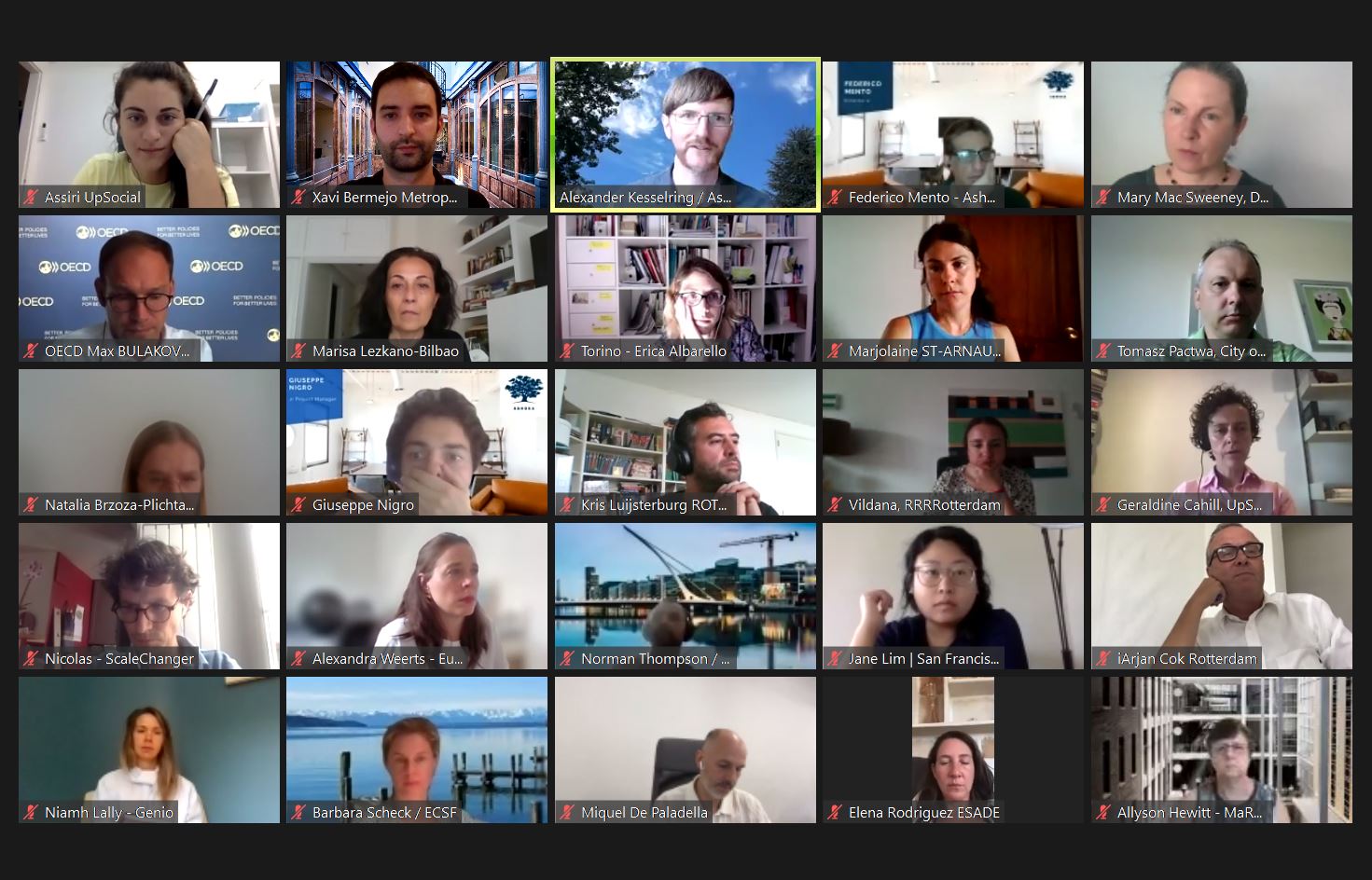 Youth unemployment and inclusion and support for vulnerable groups were the two challenges selected by the cities, and they will be at the centre of specific workshops. These two topics were chosen out of several other potential subjects, such as food security and climate transition, as they were the main common denominator between the cities. The cities also recognised that the pandemic had had a great impact on these issues, emphasising the scope of pre-existing problems. Several city representatives mentioned that vulnerable groups particularly suffered during the pandemic. For example, people who were already isolated saw that isolation increase, and mental health issues, especially among children and young people, have been sharply on the rise, which has led to a consequent increase in the suicide rate among the younger generation.

“This programme is quite successful; however, we still have a lot to improve, lots of companies are interested, but job requirements make it difficult”, Helton de Castro.

The first group, made up of Warsaw, San Francisco, Belo Horizonte and Montréal, decided that they would exchange ideas on inclusion and support to vulnerable groups, with a special focus on income inequality and migration. Helton de Castro, a representative from Belo Horizonte City Hall, took the opportunity to present the programme “Estamos Juntos” (We are together), which the city launched in 2019. Through this programme, the city ensures the inclusion of the homeless population by fostering their access to job opportunities. Collaboration with the private sectors and actors in the social economy is key in the process. By hiring people from the homeless population, companies can receive a social responsibility stamp issued by the City Hall, or gain access to tax benefits offered by the municipality. “This programme is quite successful; however, we still have a lot to improve, lots of companies are interested, but job requirements make it difficult. The situation brought about by the pandemic has made it even harder, as we have seen the homeless population increase greatly”, Castro said.

“While unemployment was rather low in Dublin before Covid-19, during the pandemic we have seen the youth unemployment rate increase sharply”, Mary Mac Sweeney.

Meanwhile, Bilbao, Torino, Dublin, Rotterdam and Guadalajara decided to exchange ideas on unemployment, especially youth unemployment and access to the labour market. “While unemployment was rather low in Dublin before Covid-19, during the pandemic we have seen the youth unemployment rate increase sharply”, stated Mary Mac Sweeney, Deputy Head of Economic Development and Enterprise at Dublin City Council, emphasising that this issue will be a major point in the recovery process.

During those group exchanges, participants will explain the context of the social problems in their territories, while also presenting some of the responses of city government and the SSE Ecosystem to address the challenges. Solutions to cross-cutting challenges will be put forward, such as space for coordination and networks between these actors, digitalisation and use of technology, impact measurement, and how to increase public awareness on the SSE.

The Peer Cities meeting was also an opportunity to showcase some of the results of the onboarding interviews carried out during June between the cities of Belo Horizonte, Montréal, Guadalajara, Bilbao, Dublin, Rotterdam, San Francisco, Torino and Warsaw and their assigned partners from the RRR Consortium. In these meetings, an RRR partner¾either an SSE support organisation or a research organisation¾, met with a Peer City to map the situation of SSE ecosystems in the area, and investigate their level of interaction and collaboration with SSE actors.

While those exchanges will be integrated into the results of a project that will be made public next October, the event offered attendees the chance to share best practices and recent developments. An example of these practices came from the city of Montréal, where in order to foster collaboration with SSE actors on specific issues, representatives organised bi-weekly roundtable discussions. On the other hand, the city of Rotterdam used social clauses in public procurement, which oblige city contractors to provide employment opportunities to the people furthest from the labour market, a process also known as social return.

For more information about this project, please contact Guillaume Berret from the Metropolis Secretariat General.

A program of the OECD:

Project funded by the European Union