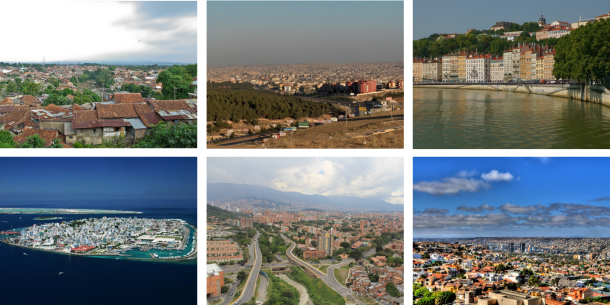 Our Board of Directors, at its last meeting during the 12th Metropolis World Congress in Montréal, ratified the six new members of the association: Bogor, Gaziantep, Lyon, Male, Tijuana and Valle de Aburrá. With these new members, Metropolis extends its presence around the world, bringing together 136 governments of large cities and metropolitan areas.

Our new members in a nutshell:

With a little more than a million inhabitants, Bogor is the sixth largest city in the metropolitan region of the city of Jakarta and the 14th in Indonesia. An important economic, scientific, cultural and tourist center, as well as a destination for mountain tourism, the metropolis is governed by the Mayor Bima Arya Sugiarto since 2014.

Near two million people live in Gaziantep, which is the capital of the province of the same name in Turkey. The Metropolitan Municipality of Gaziantep is governed by the Mayoress Fatma Sahin, 19th to join the group of women who are at the top level of political representation among our members.

The metropolis of Lyon was created as a metropolitan authority in 2015, merging the Urban Community of Lyon and the Rhône General Council. It encompasses 59 municipalities in a territory of 538 km2, where about 1,300,000 people live. The great Lyon is managed by a metropolitan council, currently composed of 165 representatives and presided by Mr David Kimelfeld.

Male’ is the capital and economic center of the Republic of the Maldives and counts on a local self-government since 2011, when the law of decentralization entered into force in the country. The Male’ City Council is led by the Mayoress Sifa Mohammed, with whom  we reach the figure of 20 women who are the highest political representatives of our metropolises.

The Metropolitan Area of the Valley of Aburrá (AMVA) is an entity that brings together 10 Colombian municipalities: Barbosa, Bello, Caldas, Copacabana, Envigado, Girardota, Itagui, La Estrella, Medellín and Sabaneta. The territory of 1152 square km of the valley is home to 3,600,000 people. The AMVA is governed by a metropolitan board composed of the mayors of its 10 municipalities, and directed by Mr Eugenio Prieto Soto.

Tijuana is helping to strengthen the presence of our association in North America. Governed by the Mayor Manuel Gastelum Buenrostro - who has been ratified as a new member of the Metropolis Board of Directors - this Mexican city of 1,641,570 inhabitants located on the border with California (USA) plays an important role toward urban diplomacy oriented by the dialogue and cooperation between the metropolises.

From the Secretariat General we warmly welcome these six major metropolises, hoping for a new cycle of work with many opportunities for collaboration and dissemination of their good practices around the world.