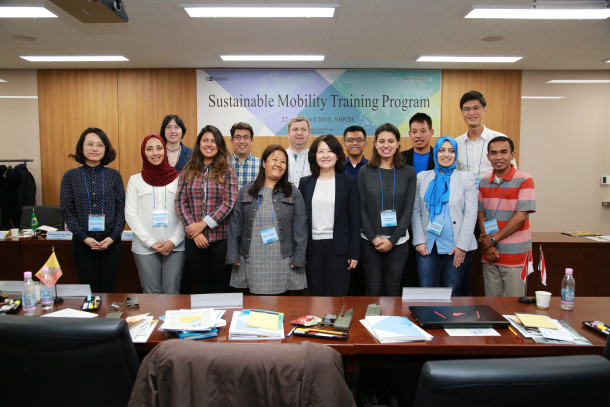 Sharing the practices and challenges of sustainable mobility

The Seoul Human Resource Development Center (SHRDC) conducted a training program on Sustainable Mobility from April 22 to 29th 2018, with participants from our member metropolises of Rio de Janeiro, Amman, Shanghai, and Jakarta.

The training program was designed specifically on the participants’ needs and the sessions were mainly focused on pedestrian friendly policies and Intelligent Transportation Systems (ITS) programs. The program consisted on lectures and field visits linked to those issues in Seoul, and also gave participants the opportunity to share the practices and challenges from their own local contexts.

Among the great diversity of cases presented, it was possible to identify that the role of metropolitan authorities will be crucial in solving one of the most challenging issues among the world cities. Facing problems such as the increased number of private cars and congested ways, participants gave common emphasis on the importance of intelligence systems and people-oriented approaches in order to reach effective transportation solutions.

For example, the participants from Rio de Janeiro exposed the case of the improvements in public transportation thanks to the organization of the Olympics in 2016. At the time of the Olympics, Rio de Janeiro could count on a new network of modern transport options that better connects the more isolated, poorer areas with the downtown. For example, the construction of the TransCarioca bus rapid transit (BRT) corridor allowed the connection of the Barra da Tijuca neighborhood, located in the western portion of the city, to the Tom Jobim International Airport, located in the eastern portion of the city, and carries 450,000 passengers per day. This new corridor permits to reduce time spent traveling by an estimated 66% between Barra da Tijuca and the Tom Jobim Airport.

Following their colleagues from Rio de Janeiro, participants from Amman exposed that in order to answer to Amman’s uncontrolled growth; the city is expected to be the home for 7 million by 2030; and related increases in traffic levels; up to 4.35 million daily trips; the city called for the construction of 3 Bus Rapid Transit, in 3 distinctive phases. The first phase of the BRT, within the city, saw a fleet of 150 high-capacity buses, shuttling as many as 200,000 passengers daily through a 33-km network, 25 km of which are dedicated bus lanes. The second BRT line, will link Amman with its metropolitan area, and the city of Zarqa, located 22 km east of the capital.

Finally, the Jakarta representatives presented the OK-Otrip program, an integrated transportation system (Integrate the management system, services (routes), and the payment system) where citizens can commute in the city with unlimited transfers for a maximum of 5.000 Rp Indonesionan (0.29€ - 0.34$) for a single trip. This program which implements its trial period until August 17, 2018, aims at decreasing the transportation cost for citizens, which reach 30% of minimum monthly average income.

During the training program, the participants also had the opportunity to visit on the ground the most relevant transportation hubs in Seoul: the Seoul Station Bus Transfer Center, the Korea Smartcard Company, the Seoul Metro, the headquarters of the Transport Operation and Information Service (Topis). In doing so, it allowed them to compare pros and cons of each city’s public transportation and discuss better way to improve them.

In addition to the Metropolis members mentioned above, the workshop counted on the participation of officials from the cities of Prague (Czech), Singapore, Cuenca (Ecuador) and Thimphu (Bhutan).