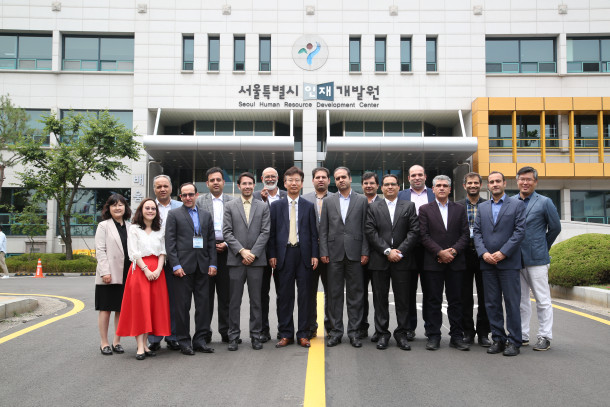 Between the 9th and the 16th of June, 13 representatives from the Municipality of Mashhad visited the Seoul Human Resource Development Center to take part in a variety of initiatives focused on the development of smart cities

When 13 members of Mashhad’s International Science Cooperation Office (ISCO) were invited to Seoul’s Human Resource Development Center (SHRDC) for a variety of training sessions on the latter’s Smart City policies, the spirit of cooperation upon which Metropolis is founded was very much on show. As a result of the week of discussions and presentations, the ISCO was able to identify two particular policies that could suit Mashhad: an increase in citizen participation in solving local problems and a transportation fare system more closely resembling that of Seoul.

The training week occurred between the 9th and the 16th of June as part of Metropolis’ learning and training projects, with which both Mashhad and Seoul are deeply involved. In particular, Mashhad’s representatives participated in lectures on Seoul’s Smart City Initiative, Emerging Technologies in Smart Cities, the Intelligent Transport System, the Financing of Smart City Projects, as well as many more. Additionally, the Iranians were able to directly witness many of those initiatives in action, as they visited sites such as the Magok Smart City District, the Sangam Multimedia and Entertainment District, the Seoul Transport Operation System (TOPIS), the Big Data Campus and the Digital Civic Mayor’s Room among others.

The participants were most impressed with the fact that the incredible amounts of data collected by the Seoul Metropolitan Government are made available to citizens as well as to the city administration, thus increasing levels of transparency, participation and, most importantly, decreasing the distance felt between citizens and government. Furthermore, the Iranians recognized the need for a smarter fare system for public transport in their city. Their hope is that by moving away from the current flat-rate system, Mashhad can not only provide better service, but most importantly encourage more ridership and thus decrease the amount of cars on the road.

After a week with their Korean colleagues, the Iranians were able to return to their city having both learnt and taught some important lessons in the development of Smart Cities, and all involved agreed that the initiative benefited both their own knowledge and their citizens’ quality of life.