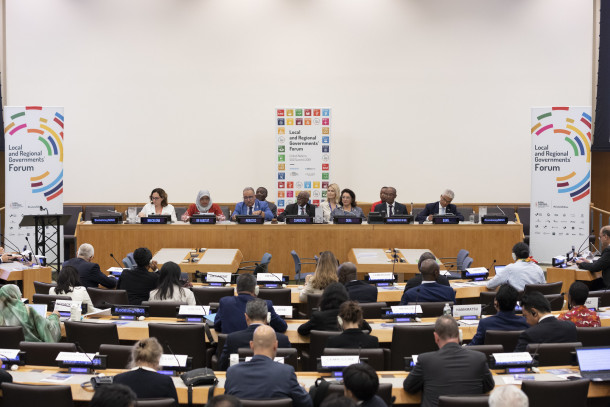 Reviewing the implementation of the SDGs at the local level

Four years after adopting the 2030 Agenda, local and regional governments met in the United Nations to showcase results on the implementation of the SDGs and to promote synergies to address the climate challenge.

On 24 September, the second edition of the Local and Regional Governments’ Forum (LRGF) took place in New York, within the framework of the first UN SDG Summit. Under the auspices of the UN General Assembly, the two-day summit was convened to follow up and comprehensively review progress in the implementation of the 17 Sustainable Development Goals (SDGs).

Barcelona, Kazan, La Paz, Montevideo, Nouakchott, Surabaya, and Tunis took the stage during the second LRGF. The three-hour event, co-organized by the Global Taskforce of Local and Regional Governments, UN DESA, UN-Habitat, and Local 2030, served to:

"This Forum is relevant not only to listen to cities and regions, but also to focus on the implementation of global agendas. Dialogue between all spheres of governments is crucial, and this Forum is a renewed space for such dialogue.", announced the Executive Director of UN-Habitat.

The LRGF resulted in the adoption of the Statement of the organized constituency of the local and regional governments at the occasion of the SDG Summit.