Raising the voices of metropolises at the WUF9

Metropolis
Metropolis has marked its political presence at the 9th World Urban Forum (WUF9) held in Kuala Lumpur, with the representation of our membership in the World Assembly of Local and Regional Governments last February 8, namely the Mayors of Surabaya and Córdoba, and the Vice-mayors of Tehran and Jakarta.

The World Assembly of Local and Regional Governments is recognized as a monitoring and reporting mechanism of the New Urban Agenda (NUA). In this sense, the local and regional elected representatives who participated in the Assembly held within the framework of the WUF9 discussed how the NUA is being implemented in their territories. They also brought up the debate about the role that local governments should play in this process, as well as the importance of putting governance in the core of the localization of the global agendas. The following political representatives from the Metropolis membership were highlighted as speakers of the session: Tri Rismaharini, Mayor of Surabaya, Ramón Javier Mestre, Mayor of Córdoba, Oswar Mungkasa, Vice-Mayor of Jakarta, and Mirzaei Hojjatolah, Vice-Mayor of Tehran.

The final declaration of the Assembly, read by the Secretaries General of Metropolis (Octavi de la Varga), the Council European Municipalities and Regions - CEMR (Frédéric Vallier) and the regional section of UCLG for Middle East and West Asia- UCLG-MEWA (Mehmet Duman), highlighted the importance of the right to the city as a central axis, the explicit recognition of local governments in the implementation and monitoring of the NUA, and the importance of inclusive and complementary multilevel governance.

The Assembly of Local and Regional Governments was preceded by a meeting between representatives of the Global Task Force and the new Executive Director of UN-Habitat, Ms Maimunah Mohd Sharif, who expressed her commitment to local and regional governments.
Members
Jakarta
Surabaya
Tehran
Córdoba
Documents: 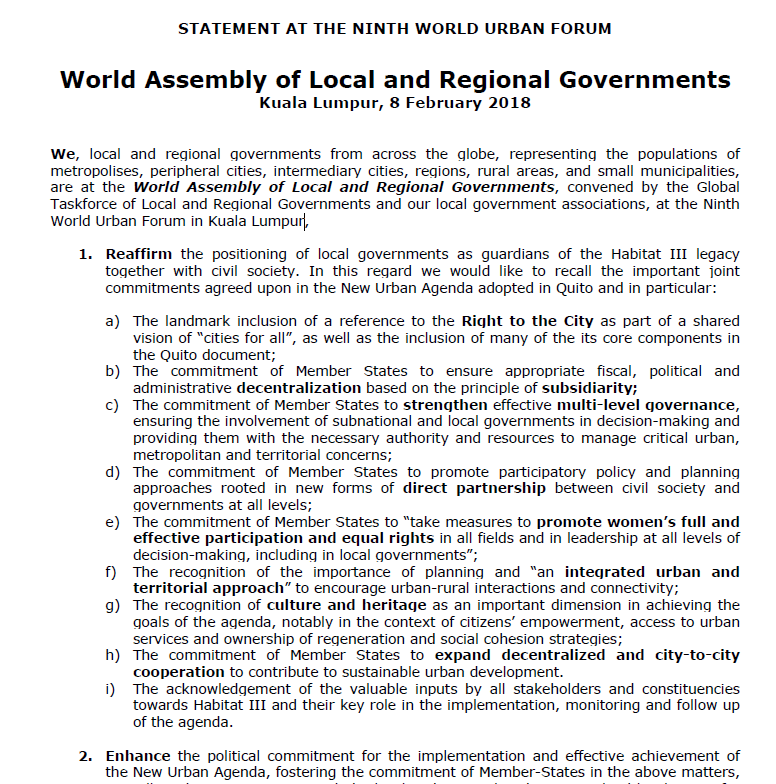 World Assembly of Local and Regional Governments in Kuala Lumpur
Copyright on this site is licensed under a Commons Attribution-NonCommercial-ShareAlike 4.0 International License
Website by Punt Zero