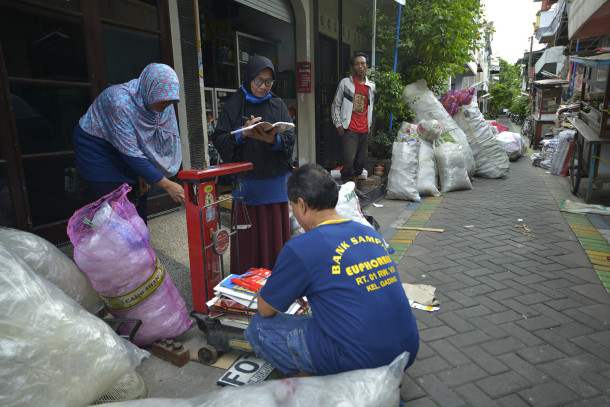 Despite a limited local culture of recycling, Surabaya used out-of-the-box thinking to encourage residents and itinerant workers to recycle, reduce, and reuse without having to expend significant municipal resources.

Indonesia’s second-largest city struggled with a surge of new residents, as well as a daytime population nearly double the nighttime population. This population growth along with an inadequate waste disposal system contributed to increasing amounts of garbage ending up in landfills. Surabaya hoped to turn the tide and become an eco-friendly city where the 3Rs - recycle, reduce, reuse - are normative behaviours.

Surabaya’s efforts consisted of extensive public education to promote 3R principles to a poorly educated community unfamiliar with such concepts. One of the city’s informal settlements, known as kampung, was selected to serve as a pilot community where more current waste disposal practices could be deployed in a dense, older neighborhood of alleyways.

“Before, Surabaya was hot and dirty. Garbage was everywhere along the roads and in the rivers,” said Mayor Tri Rismaharini. “We are trying to make citizens care more about garbage.”

Surabaya’s most innovative tool in its 3R toolkit mandated that city-owned buses accept plastic bottles as a form of payment. The simple executive order accomplished three goals in one fell swoop: boost public transportation ridership, encourage recycling, and reduce sanitation costs like waste bins and pickup. As part of a broader citywide cleanup and waste management strategy, Surabaya reduced waste by 10 percent per year even as the city population grew 5 percent annually.

“If we involve citizens and work together with all the stakeholders, it’s easier and cheaper,” Rismaharini said.

Surabaya has been internationally recognized for its urban greening efforts and hosted the annual Regional 3R Forum in Asia and the Pacific in 2014.

“People who come to Surabaya, they change their behaviour because they know that Surabaya is cleaner than before,” Rismaharini said.