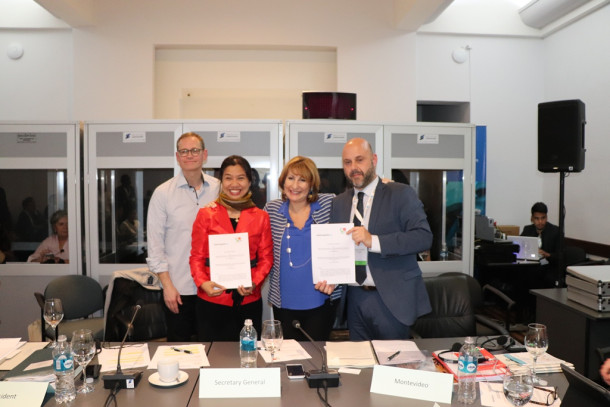 New agreement to benefit the metropolises from Asia and the Pacific

Seizing the occasion of the day of statutory meetings of Metropolis and fellow local government networks held in Montevideo last April 6, the Secretaries-general of Metropolis and United Cities and Local Governments Asia-Pacific (UCLG ASPAC) signed a new collaboration agreement to support both parties to fulfil their roles as sections of UCLG, and therefore contribute to the World Organisation’s mission, to be the united voice and world advocate of democratic local self-government.

Metropolis and UCLG ASPAC had been partners since 2007, when a system of joint membership was inaugurated, allowing ASPAC members that are state capitals or urban agglomerations of at least one million inhabitants to automatically join Metropolis. Likewise, Metropolis members from the Asia-Pacific region have also been allowed to automatically join UCLG and UCLG ASPAC. Currently, Metropolis counts on 54 UCLG joint members from the Asia-Pacific region.

At the Metropolis staff, the Senior Manager for Institutional Relations & Asia is the responsible focal point for observing the accomplishment of this agreement. Should you have any inquiries about the shared activities of Metropolis and UCLG ASPAC, please refer to Ms Agnès Bickart at the Metropolis Secretariat General.