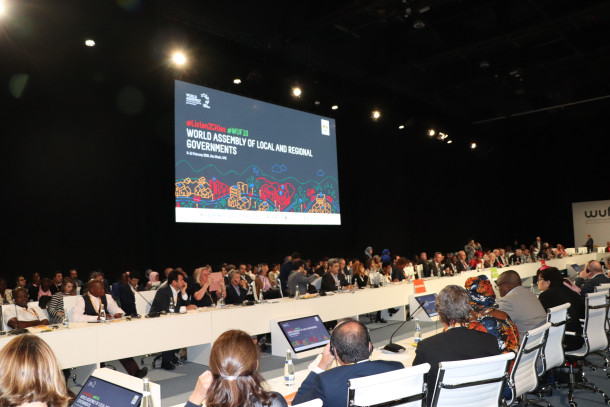 Metropolis marked its political presence at the 10th World Urban Forum (WUF10) held in Abu Dhabi, with the representation of our members in the World Assembly of Local and Regional Governments last February 8 - Barcelona (city and metropolitan area), Bogotá, Cairo, Madrid, and Tunis.

The Metropolis Secretary General, Octavi de la Varga, also joined the Assembly, as the facilitator of the round table about the role of local regional governments in maximizing the relationship between tradition, culture, and sustainable urbanization: “Culture and tradition play a key role to plan sustainable urbanization”, he remarked, opening the floor to the speeches of Rashid Ayupov, Mayor of Turkestan; Pilar Diaz, Deputy Councillor for International Relations of the Barcelona Provincial Council, Mayor of Esplugues de Llobregat; Ulrich Sierau, Mayor of Dortmund; Jānis Vilnītis, Vice Mayor of Liepāja; Rene Peter Hohmann, Head of Global Programmes at Cities Alliance; Peter Phillips, Secretary General of the International Council on Monuments and Sites (ICOMOS); Stephen Weir, Vice president for Global Development and Support at Habitat for Humanity International; Stephen Wyber, Policy and Advocacy Manager of the International Federation of Library Associations and Institutions.

The main statements and consensus of the Assembly were:

The Assembly resulted in a joint statement from the constituency of local and regional governments, which can be downloaded here.

Ms. Maimunah Mohd Sharif, Executive Director of UN-Habitat, who made opening and closing remarks for the Assembly, called all local and regional governments present to commit not only to declarations but mostly to declare actions and bring back concrete experiences in the next edition of WUF, which will take place in Katowice (Poland) in 2022.