Metropolises take on the challenge of intersectionality in LGBTI policies

From 12 to 15 December, Montevideo and Buenos Aires hosted the first meeting for the project "Intersectionality in Metropolitan LGBTI Policies". This project involves the metropolises of Montevideo, Medellin, Mexico, Berlin, Barcelona and Buenos Aires, and aims to draw together common knowledge so that an intersectional perspective can be incorporated in policies aimed at LGBTI persons, where the acronym stands for Lesbian, Gay, Bisexual, Trans and Intersex. The intersectional approach aims to acknowledge that all people, including those who identify as LGBTI, are affected by multiple inequalities and that this intersection creates a new kind of discrimination, which differs from the sum of these inequalities. The main talking point covered in this first meeting was the situation that LGBTI migrants and refugees face.

What happens to trans women who are of African descent or migrants? What happens to gay seniors? What about lesbian women with disabilities? What happens to all of them when they are in poverty? In general, the people at these intersections are pushed into the background, and do not receive an adequate response from public policies that are designed for one inequality or another. They move from one office to another, finding answers that are segmented and do not address their situation. Incorporating an intersectional perspective means cities can focus on the human rights of those who have been forgotten.

This project aims primarily to share the experiences of working with LGTBI people who are also affected by other inequalities, such as gender, age and nationality, whether or not the experiences were successful. Similarly, the project aims to generate a methodology to draw up local, social and gender policies for LGBTI persons, based on exchanging lessons learnt and with the support of expert knowledge, and from the perspective of an intersectional approach. Once the project has been completed, a manual on how to design and monitor city policies using this approach will be made available to all cities.

From the very start, the project has aimed at innovation. The first meeting was held in two cities twinned by the River Plate: Montevideo (on 12 and 13 December) and Buenos Aires (on 14 and 15 December). The main talking point covered in this first meeting was the situation that LGBTI migrants and refugees face.

In Montevideo, the project was launched by the Mayor of Montevideo, Daniel Martínez, with the virtual attendance of the Secretary General of Metropolis, Octavi de la Varga. Both men highlighted the importance of putting the situations of people across the range of sexual and gender diversity on the city's agenda. They also acknowledged the value of bringing together knowledge that can later be shared with cities in adverse conditions, in order to advance the human rights of LGBTI people.

In Montevideo, the participating cities were also key figures in the close of "Intersections", a series of talks on the inequalities suffered by LGBTI people. Throughout 2017, the cycle brought together more than 400 participants from academia, civil society and public institutions, who discussed the many facets of discrimination (gender, family diversity, afrodescendency, HIV, youth, old age, deprivation of liberty, disability, migration and refugees).

On this occasion, the cities presented their LGBTI policies, as well as their responses to the inequalities suffered by LGBTI people who are also migrants or refugees. Featured in particular were: policies implemented by Berlin and Barcelona in relation to refugees from the Middle East and other places; the phenomenon of Central American immigration to Mexico City; the experience of international migration to cities such as Montevideo and Medellin from other countries in Latin America, or even from places as far away as Russia; the internal migration of trans women to Buenos Aires, and the arrival of refugees from the Caribbean to the Argentinian capital for reasons of sexual orientation.

This theme was also featured in Buenos Aires, during a meeting with activists at "Casa Trans". This new experience, which has been running for a year, offers comprehensive support to trans people, and has become a reference point for metropolitan LGBTI policies. The topic was also touched upon in the meeting held with the "Diversity Network", made up of LGBTI employees working in the city government.

Debate activities came to a close with the virtual participation of Gerard Coll Planas, Doctor in Sociology at the Autonomous University de Barcelona and Director of the Centre for Interdisciplinary Gender Studies at the University of Vic, who is responsible for drawing up the manual to design and monitor the policies for the project. The manual includes the working plan for the project until 2019, including an analysis of the multiple intersections that cities come across every day as they seek to guarantee the rights of LGBTI persons.

The Argentinian capital also offered the opportunity to visit the Carlos Jáuregui Station, the first metro station in Latin America named in honour of an LGBTI social leader. In addition, the "Trans Memory Archive" project was presented in the Haroldo Conti Memorial Cultural Centre, housed at ESMA, a former centre for torture and disappearance of thousands of people during the Argentine dictatorship (1976-1983).

The project is open for dialogue with anyone who shares an interest in the subject and approach. In order to draw up the manual to design and monitor LGBTI policies with an intersectional perspective, the project aims to highlight practices not only from the participating cities, but from any cities that want to share what they have learnt in terms of good experiences, as well as less successful ones.

This is just the beginning.

By Andrés Scagliola, Coordinator of the Secretariat for Diversity of the Municipality of Montevideo; David Cohen, Executive Director for Coexistence in Diversity of the City of Buenos Aires;
Florencio Chicote, Office for Equal Treatment and against Discrimination of the Berlin Senate; Margarita Castilla, Technical Secretary of the Council to Prevent and Eliminate Discrimination (COPRED) of Mexico City;
Meritxell Sàez, Secretary of the LGTBI Municipal Council of the Barcelona City Council;
Tomás Caballero, Senior Professional for Project and Value Proposal, Cooperation and Investment Agency of Medellín and the Metropolitan Area. 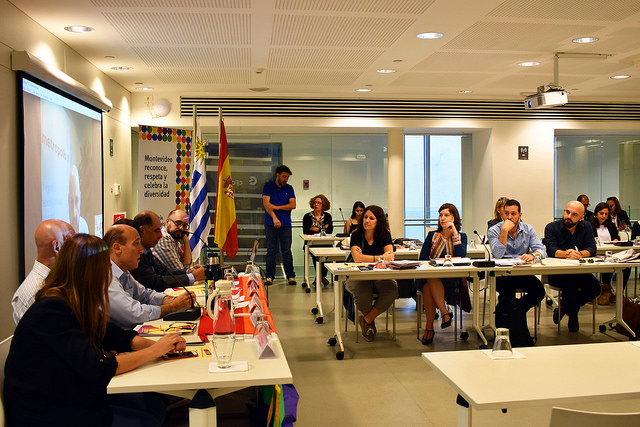