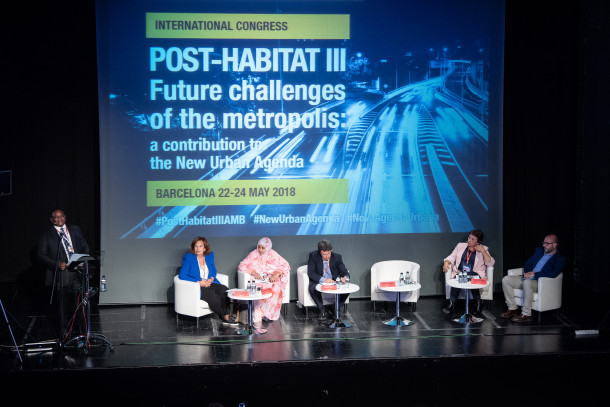 From May 22 to 24, the Post-Habitat III international congress, organized by the Metropolitan Area of Barcelona (AMB), was held in Barcelona and aimed to share the proposal of Barcelona for the New Urban Agenda (NUA) and the experiences of experts and other metropolitan governments. Our membership was represented in the congress through the participation of Bamako, Mexico City, Jakarta, Santiago de Chile, Seoul and Nouakchott in different round tables, giving varied examples of metropolitan governance around the world. The Secretary General of Metropolis was also present as a speaker at one of the sessions.

The congress had more than 200 participants from around the world, mostly of technical profile. Its program was structured in four major areas: social cohesion, sustainability, territorial planning and economic development, on which experiences were shared and challenges were raised at a metropolitan level.

Examples of metropolitan governance in Metropolis

Metropolis had an important presence in the congress, participating in four of its sessions. At a technical level, Mexico City, Jakarta and Seoul participated and discussed the challenges of the metropolitan areas in social rights, metropolitan planning and tools for the construction of metropolitan governance, respectively.

At the political level, the presence of our membership in the round table “Cities and metropolises facing global agendas” stood out. The mayor of the Municipal District of Bamako, Mr. Adama Sangaré, the President of the Urban Community of Nouakchott, Ms. Maty Mint Hamady, and one of the counselors of the Metropolitan Regional Government of Santiago de Chile, Ms. Nelly Santander, in addition to the Secretary General of Metropolis, Mr. Octavi de la Varga. Their speeches coincided in the fight against climate change and the development of social policies to fight against inequalities.

Ms. Hamady, for example, explained that “Nouackchott focuses metropolitan work on the application of the Sustainable Development Goal 11, building a resilient territory equipped with the necessary infrastructures for economic development and urban services that citizens need”. A line that coincided to a large extent with Mr. Sangaré's statement: “The priority measures for the Bamako government are: the fight against global warming and climate change, the construction of new centralities and a new mobility plan based on public transport”. Ms. Santander shared the importance of governance as a member of the Metropolitan Regional Council of Santiago de Chile: “We have learned that we have to coordinate with all the government programs that have something to say and something to deliver”. Finally, Mr. de la Varga highlighted the importance of the existence of global networks, such as Metropolis or MedCités (also represented at the round table by its Secretary General and responsible for international relations of the AMB, Mr. Xavier Tiana). According to Mr. de la Varga, “the existence of these networks, and especially in the case of Metropolis, guarantees that there are spaces that allow the creation, defense and transmission of the metropolitan story”. And, at the same time, through the example and good praxis of its members, “Metropolis is a space for the creation and exchange of tools and good practices for the metropolitan governance”.

The contribution of the AMB to the NUA

The approval of the NUA in 2016 meant, among other things, the acceptance of the urban focus within the framework of the global agendas. In this urban context, metropolitan areas around the world share challenges and problems. The AMB proposed the congress focusing on the metropolitan challenges in the fight against social inequalities and the consequences of climate change. In fact, it was the same vice president of the AMB, Mr. Alfred Bosch, who, in his opening and closing speeches, focused his words on these areas: “Success lies in building metropolitan spaces that know how to manage intelligence by creating ecosystems that are efficient and self-sufficient; and, at the same time, guarantee the social redistribution of the wealth they generate”.