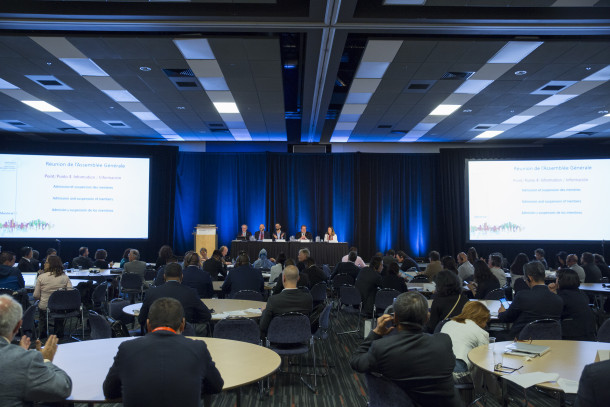 The Metropolis Board of Directors and the General Assembly meetings took place at Metropolis 12th World Congress, held last 19 to 22 June in Montréal.These statutory meetings will have a significant impact on Metropolis' future, as they saw the adoption of numerous measures.

The General Assembly, which was held on Thursday 22 June, saw the election of the new Board of Directors for the period 2017-2020, composed of 28 members, and the re-election of Denis Coderre, mayor of Montreal, as President of Metropolis. The GA, validated Metropolis' action plan for the period 2018-2020. The action plan is the result of a long consultation process executed on several levels, including with the various Regional Secretariats. This is the result of strategic planning executed during 2016 following the approval of the association's strategic guidelines at the Bogotá Board of Directors Meeting.

Finally, the General Assembly approved the Montreal Declaration, declaration of intent of the cities to tackle local and global challenges and to implement the Paris climate agreement. This declaration was drawn up with several other city networks participating in the 12th Metropolis World Congress, who declared their wish to contribute and associate themselves with a common declaration with Metropolis.