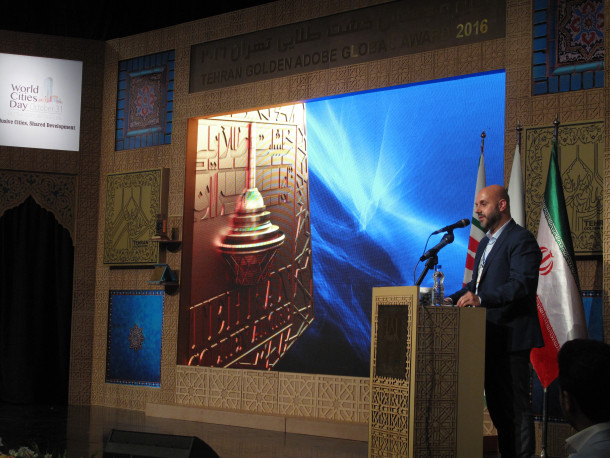 A comprehensive, scientific, and non-governmental initiative, Tehran Golden Adobe Award (TGA) aims at introducing and supporting the top international urban management projects as well as exchanging the experiences of the civic management.

The Third Edition of the Golden Adobe Global Award for Top Management Projects has been supported by Metropolis and was held in Tehran on October 31, 2016 to mark the UN World City Day. In the framework of the MoU recently signed between the Municipality of Tehran and Metropolis, the association has committed itself to keep providing support and International sponsorship to one of the most promising and prominent Urban distinction in the region.

and local delegates participated and celebrated the World city day with two technical panels dedicated to Smart City and Resilience in cities.  UNHabitat, Asian MayWCT, ISOCARP and the Mayor of Sarajevo and Balbeck attended this event.

Out of 21 shortlisted projects, 7 superior practices or projects were announced as projects of the year.

A Metropolis delegation composed of executive director Octavi de la Varga and manager for international relations Agnès Bickart attended the conference and ceremony. After presenting the new strategic orientations endorsed by the Metropolis Board of Director, Octavi de la Varga, Executive Director of Metropolis highlighted the challenges that majors cities are facing currently within the new international agenda and was proud to deliver the award to the cities among which four cities are Metropolis members. The cities of Barcelona, Berlin, Tabriz and Tehran have been rewarded in different categories and as follows:

In the category: Architecture, Urban Development and Cultural Heritage: Tabriz was awarded for the project "Capital of Islamic World Tourism 2018"; and Tehran for the project: "Reconstruction and Rehabilitation of Bagh-e-Melli and Mashgh Historical Square".

In the category Urban Infrastructure, Facilities & Essential Services: Barcelona was granted a prize for the project "Encants Flea Market";  Isfahan for "Esteqlal Set of Bridges and Square"; and Tehran for "Revival of River Valleys: the link between cities, citizens and rivers".

In the category Cultural and Social Devt of Cities: Tehran was awarded for "Baharan Rehabilitation and Empowerment Centers

In the Category: Local Governance, Urban Management and Planning: the award was given to the project "Climate Neutral Berlin 2050"; and to Tehran's "Organizing and Evaluating of Buildings Facades".