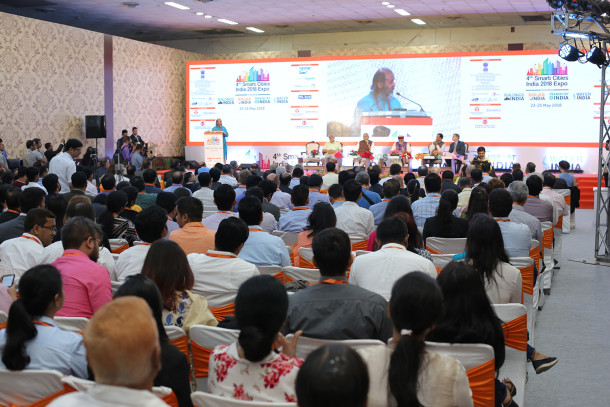 This year, Metropolis collaborated once more with Smart Cities India Expo, one of the largest urban events in the country, as one of its global institutional partners. From past May 23 to 25, a delegation from the Secretariat General travelled to New Delhi to organize three side-events of the 4th Smart Cities India 2018, where we also counted on the active participation of some of our members, namely: Bangalore, Bhopal, Kolkata, Tijuana and NIUA. A wide range of sessions was related to the Sustainable Development Goals (SDGs), and the participation of Metropolis was mostly linked to SDGs 9, 11 and 17.

On May 23, the session “Metropolitan strategies to achieve Safe Cities for Women and Girls” extensively covered the accomplishment of the SDG 11 (sustainable cities and communities) – click here for further details about this session.

On May 24, the Metropolis team co-hosted the “City Leaders Conclave”, a block of two workshops suited for mayors, city managers and urban practitioners. The workshops, moderated by Dr Sunil Dubey, Metropolis advisor, focused on themes of strategic implementation of smart cities and of governance to build liveable cities. Ms Agnès Bickart, Metropolis Senior Manager for Institutional relations & Asia portfolio, also intervened at the conclave, emphasising on the need for international collaboration and partnerships with Indian cities through capacity building and applied training. The conclave focused not only on SDG 11, but also on the Global Goals 9 (industry, innovation and infrastructure) and 17 (partnerships for the goals). The SDG 9 was also the main topic of the inaugural session of the 4th Smart Cities India 2018 Expo, which brought keynote speeches by representatives of major private companies (PwC India and Tata Group).

Another highlight of the conference was the ceremony of the Smart Cities India Awards, which gave the Urban Mobility Award to the project “Security Integration & Intelligent Traffic Management System” presented by the Bhopal Smart City Development Corporation Ltd. The third edition of this prize, conducted by Exhibitions India Group, received 130 nominations.  A jury of seven eminent members, with vast experience and knowledge on the subject of smart cities applied on fields as varied as water, education, and infrastructure, was responsible for the selection of the winners in 19 categories. Click here to check the winners of all categories.

Moreover, the event in New Delhi served for the Metropolis delegation to meet diverse stakeholders, ranging from international agents (such as GIZ and the International Solar Alliance) and private companies (such as Yes Bank and Tata Group) to Indian local governments.  The cities of Aligarh, Moradabad, Lucknow, Gurugram, Warangal, Gwalior, Nagpur, Pune and Vishakhapatnam showed great interest in the Metropolis training programmes and willingness to cooperate with our association in the coming years.

In total, the conference attracted over 18 thousand participants, including the presence of 19 mayors and local political representatives from India and abroad. There were 44 thematic sessions, with the participation of 250 speakers. The event also counted on exhibition stands offering sustainable energy and mobility solutions from enterprises worldwide.

The Smart Cities India Expo belongs to the framework of the Smart Cities Mission, an unprecedented urban renewal and retrofitting programme led by the Government of India, which aims to develop make more than 100 cities all over the country citizen-friendly and sustainable. It is projected by the United Nations that India will add another 400 million plus people in cities and metropolitan regions by 2030 and become the third largest economy in the world after China and the United States. With the leadership of our partners in the National Institute of Urban Affairs (NIUA), we seek to engage all our Indian members in this mission.

For further details on the presence of Metropolis in Asia, please contact Ms Agnès Bickart at the Secretariat General.

Here you can watch the pictures the videos of the sessions in which Metropolis collaborated:

To see the pictures of the sessions, click here