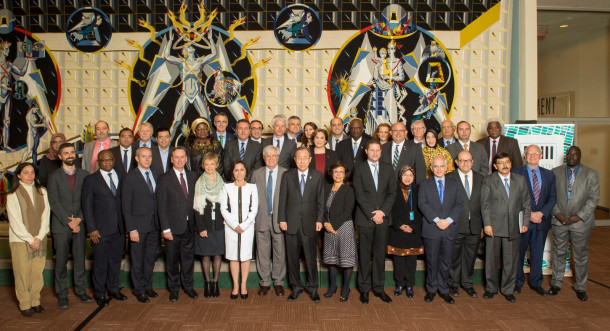 Under the framework of preparations for the United Nations conference on urban housing, Habitat III, Secretary General of Metropolis Felip Roca participated in the Second World Assembly of Local and Regional Governments on 15 and 16 May and the later Informal Audiences with United Nations member states. For the first time in history, the United Nations has recognised local governments as specific key actors in defining the large-scale challenges that will be on the new urban agenda to be passed this October in Quito.

On the 16th, Vice-president of Metropolis and Mayor of Barcelona Ada Colau and Co-president and Mayor of Johannesburg Parks Tau defended the key role cities and large metropolises play in the international agenda to the member states in New York, stressing the need to include local government in tackling the challenges of the new urban agenda. The message from these two mayors was also echoed by Mauricio Rodas, mayor of Quito and member of the Metropolis Board of Administration, in highlighting the importance of localising sustainable development goals and participating not only in implementing but also in helping define the urban policies that national governments will agree on in Ecuador.

In speaking to the Second World Assembly of Local and Regional Governments, Felip Roca, on behalf of Metropolis, asked that the final declaration of Habitat III include the metropolitan viewpoint, which is key to structuring the territory according to sustainable development goals. In this regard, he linked this request with the declaration signed in Montréal in October at the themed event on metropolitan areas held to pave the way to Quito. He also discussed the conclusions of PrepCity III Cities as Actors, held recently in Berlin, which particularly stressed the need to give cities the necessary capacities, mandate and economic and financial resources they need to make these declarations and agreements actual facts.