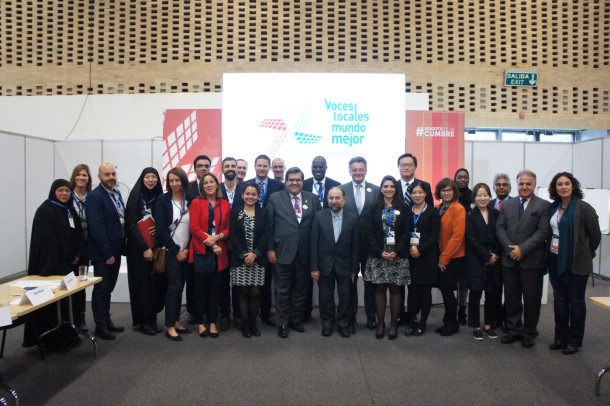 In the framework of the World Summit of Local and Regional Leaders that took place last October in Bogota, the Metropolis Board of Directors held an extraordinary meeting. In addition to presenting and approving our new strategic guidelines document, which underlines Metropolis' focus in metropolitan governance matters, the meeting served to address various issues of great importance for the development of our association's future activities.

Secretary General Felip Roca gave a review of the main actions carried out by the Secretariat General since the last board meeting, held in March in Mexico City. The Secretariat General now operates by a new procedures manual, which aims to provide Metropolis with greater planning, efficiency and transparency, in all the activities that we carry out. The Secretary General also explained the creation of a Metropolis brand identity manual, whose purpose is to promote an adequate use of the Metropolis brand by our members and collaborating entities. In addition, the budgets for 2016 and 2017 were approved.

The president of Metropolis Women, Laura Pérez Castaño, presented the strategies to incorporate the gender perspective as a fundamental axis of our association, and to place Metropolis as an international reference in urban policies designed for and by all citizens. In addition, the framework document "8 key messages to promote sustainable mobility with a gender perspective in our metropolises" was presented and approved. This document was the result of a strategic orientation workshop held in July in Barcelona, and was presented the day before the Board of Directors extraordinary meeting at the learning session on mobility of the 5th UCLG World Congress. A proposal of action lines for Metropolis Youth was also proposed, towards the development of mechanisms to incorporate the youth perspective into the formulation of metropolitan policies.

As in every Metropolis Board of Directors meeting, in accordance with our statutes, the occasion served to ratify the new membership of South Tangerang, counting currently as the 138th member of the association.

During the meeting, a memorandum of understanding was signed between Metropolis and the People's Government of Guangzhou Municipality, which agreed on a joint commitment to promote urban innovation as a key element of sustainable development among the members of our association. An example of this commitment is the collaboration in the promotion of the Guangzhou International Award for Urban Innovation. The meeting was also the occasion to present a memorandum of understanding signed between Metropolis and the Tehran Municipality that encourages city diplomacy, the promotion of the Tehran Golden Adobe Award and the World Cities Day.

Berlin presented the final results of the PrepCity proceedings for Habitat III.