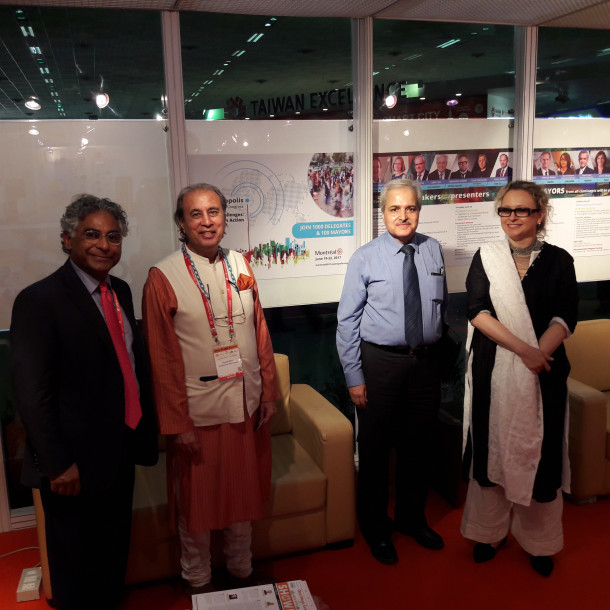 Metropolis provided institutional support and content contributions to the program of the 3rd Smart Cities India 2017 Expo, which took place in New Delhi last week. The conference was organized in conjunction with four urban events under the theme of “One Mega Event – Smarter solutions for a Better Tomorrow”, and belongs to the framework of the Smart Cities Mission, an unprecedented urban renewal and retrofitting programme led by the Government of India, which aims to develop make more than 100 cities all over the country citizen-friendly and sustainable. With the leadership of our partners in the National Institute of Urban Affairs (NIUA), we seek to engage all our Indian members in this mission, promoting better metropolitan governance, social inclusion, gender equality and sustainability.

The 3rd Smart Cities India 2017 Expo attracted over 15 thousand participants over four days, including the presence of 150 mayors and city managers from India and abroad. There were 54 interactive workshops and sessions where 350 speakers and subject experts provided insights about various subjects, among which the highlights were climate change adaptation and the importance of governance and technology for cities around the world. The event also displayed about 400 exhibition stands, mostly offering transport and sustainability mobility solutions from enterprises worldwide to Indian cities.

On May 11, Metropolis, with the representation of our senior advisor Sunil Dubey, chaired the session “e-Governance for Smart Cities”, which included the participation of representatives from the private sector, as well as academic and philanthropic institutions. The session was a singular opportunity for Metropolis to showcase its services for Indian urban stakeholders, especially with the programmes and applied practices of the Urban Innovation Community led by Guangzhou. Attended by over 200 delegates, the session counted on an interactive Q&A session with the panellists and subject experts – click here to watch the full broadcast of the session, recorded live.

During the event, Mr Dubey gave an interview to an online expertise TV channel, at which he underlined how Metropolis can unveil the potential of Indian cities to the world:

In addition, this occasion in India was unique to promote the XII Metropolis World Congress, which takes place about a month after the 3rd Smart Cities India 2017 Expo. Sunil Dubey and Agnès Bickart, institutional relations & Asia portfolio manager at the Metropolis Secretariat General, attended the expo also to encourage the present Indian metropolises, institutional partners and private companies, as well as of the organisers of the mega event, to come to Montréal and confirm their participation in our major triennial event from June 19 to 22.

Last but not least, the event in New Delhi provided an opportunity for Ms Bickart to hold bilateral meetings with various Metropolis members from Asia, as well as other non-member cities, public and private institutions from this region and abroad. One of the most fruitful of these meetings was the one held with, Dr Sameer Sharma, Additional Secretary and Director of the Smart Cities Mission, who welcomed the Metropolis delegation to the offices of the Indian Ministry of Urban Development and ensured full support to Metropolis in India, committing to bring between ten and twelve new metropolises in the country to join our association.

The guiding principles of the Smart Cities Mission, also known as “100+ Smart Cities”, were initially presented in 2014, during the 11th Metropolis World Congress in Hyderabad, by Mr V Naidu, honourable minister for Urban Development of India and currently the President of the Bureau of the Governing Council of UN-Habitat. Back then, Metropolis presented to Mr Naidu a briefing paper to contribute to the programme, suggesting the inclusion of ‘Housing for All’ as an essential criterion for urban renewal endeavours in India.

Since then, the Metropolis members in India and international partners have been engaged in promoting the objectives of urban innovation and smart cities. India. Professor Jagan Shah, the Director of NIUA, has been advising the government of India, city governments and various public sector organisations in establishing the important link of social innovation, safety and technology with smart city design principles.

“Governance in Indian cities is one of the most challenging tasks ahead for all levels of government, but technology and innovation bring enormous opportunity for Indian metropolises to leapfrog some of the complexities of governance by giving people a real say in the planning and day to day management of their cities”, stated Ms Bickart, who will coordinate a future Metropolis campaign in India with strategic events and programmes in India, starting on late 2017.

For further details on the presence of Metropolis in the Asia-Pacific region, please contact Agnès Bickart.