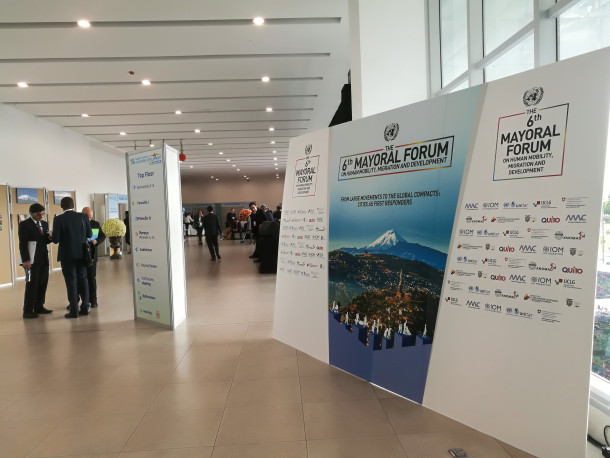 From 19-24 January 2020, the Twelfth Global Forum on Migration and Development was organized in Quito, Ecuador. The Summit welcomed over 1000 participants, and was the first GFMD Summit to host civil society, private sector, local authority, youth and academia representatives as integrated participants in the Summit. Organized as a integral part of the program, the 6th Mayoral Forum on Human Mobility, Migration and Development brought the perspective and expertise of local authorities into GFMD discussions, and called for concrete steps towards the multilevel governance promoted by the Global Compact on Migration.

On Tuesday, 21st January, participants were welcomed to the Twelfth GFMD Summit in the Official Opening Ceremony, which featured high level statements from a variety of key actors and partner. Metropolis Co-President and Mayor of Montevideo, Mr. Christian di Candia, spoke on the behalf of local authorities during this opening ceremony. He highlighted that the inclusion of the Mayoral Forum in the GFMD Summit was a major step fostering shared understandings and creating partnerships, and that local authorities had a vital role in implementing migration and development policy. M. Di Candia ended by declaring that "local authorities have valuable experience to share when it comes to fostering community cohesion in the face of the fearful and divisive rhetoric surrounding migration and migrants".

On the 22th, for the first time, the Mayoral Forum was held as an integrated part of the GFMD Summit program. Impulsed by the Mayors Mechanism - co-steered by United Cities and Local Governments (UCLG), The Mayors Migration Council (MMC) and The International Organization for Migration (IOM) - the theme of this year’s Mayoral Forum was “From Large Movements to the Global Compacts: Cities as First Responders”, speaking to the frontline role of local and regional authorities when it comes to issues of migration and displacement. The 2020 Mayoral Forum combined high-level plenary sessions that includes local and regional authorities, where discussions followed up on both the Global Compacts on Migration and Refugees, and on the Marrakesh Mayors Declaration adopted in 2018. Among the issues addressed, local governments also focused on access to basic services, the fight against discrimination and mechanisms to support local action in favour of inclusion policies.

The 7th Mayoral Forum on Human Mobility, Migration and Development will take place next year in United Arab Emirates