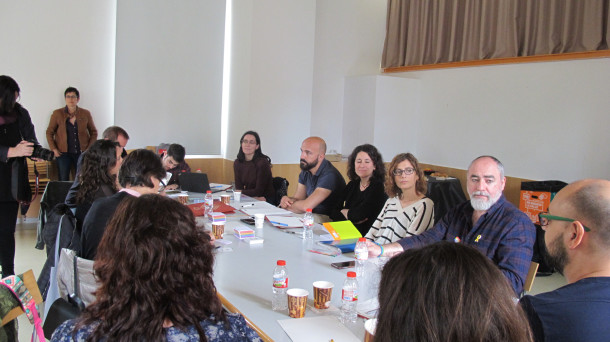 Intersectionality: an open and collective construction

The second meeting of the pilot project “Intersectionality in Metropolitan LGBTI policies”, held in Barcelona from 2-4 May, brought together again the metropolises of Montevideo, Medellin, Berlin, Barcelona, Mexico City and Buenos Aires with the aim of producing common knowledge on local social and gender policies with an intersectional approach for the full inclusion of LGBTI people.

As in the first meeting of the pilot project, different spaces alternated: working meetings with our members; meetings with LGBTI social organisations that carry out intersectional experiences; a seminar open to a broader audience of academics, public officials, and social entities. All of them took part in a collective learning process that aims to build:

One of the components of the project are internal working meetings, aimed at substantive discussions between the metropolises with the support of expert knowledge, as well as its coordination.

In addition to those who are signing this article, Marta Cruells, head of the cabinet of the Feminisms and LGBTI Department of the Barcelona City Council, and Andreu Agustin, coordinator of the Municipal Plan for Sexual and Gender Diversity, Measures for LGBTI equality 2016-2020, participated in these bodies; Olga Arisó, head of the Department for the Promotion of Women's Rights and LGTBI collective, all three from Barcelona City Council; and, especially invited, Javier Sáez, sociologist and activist, speaker at the debate organised as part of the meeting.

On May 3, we organised a seminar open to the general public at the Palau Macaya, which aimed to open a space for participation and dialogue with social actors, public policy makers and academics on the substantive theme of the project.

The activity was inaugurated by Laura Pérez, Councillor of Feminisms and LGBTI of the Barcelona City Council, and Octavi de la Varga, Secretary General of Metropolis, highlighting the integrating vision of the cities that the project contributes as well as the idea of the metropolises as spaces for diversity management.

The seminar opened with a conference entitled "The intersectional approach and public policies" by Javier Sáez, sociologist, LGBT activist and human rights expert. This was followed by a round table discussion (How do we incorporate an intersectional approach into local public policies?), and by a table of significant experiences from Berlin (on LGBTI older people), Madrid (health and sexual and gender diversity), Barcelona (network of schools and institutes for equality and non-discrimination) and Medellín (collective reparation of LGBTI groups in the framework of the armed conflict).

In the building where the Metropolis Secretariat General is located, first, and in the Nou Barris Library, later, we were able to see  projects both from the local government and from LGTBI organisations: TransLab, on analysis of trans reality in the city of Barcelona; the Carolinas Programme, aimed at trans sex workers; the TransOcupació Programme, for the inclusion of trans people in employment; the Espai Sororitat Trans of the Surt Foundation; the Trans Women's Group of Médecins du Monde; the Stop Sida Association and the ACATHI Association, which works with migrant and refugee LGBTI people.

We also learned about the experience of the Feminist Campaign for the Right to Assisted Reproduction; Asociación Creación Positiva, about sexual health from a feminist perspective; Fundació Enllaç, which works in the field of LGBTI older people; and Oasis, a leisure education project through summer camps for LGBTI adolescents.

Since the first meeting of this pilot project, the activities have been transformed into spaces for the promotion of other complementary cultural activities, aimed at making visible and broadening the audience of the substantive theme of the project.

The following experiences were thus added to the meeting programme: the LGTBI Urban Route, with Leopold Estapé; the photo exhibition Trans* in der Arbeitswelt /Trans in Labour and employment, Berlin; the photographic exhibition by Delfina Martínez, Cuando travajar se escribe con "V", Montevideo; the projection of small capsules related to inequalities of social class, gender and age, and subsequent colloquium, based on the contents of the documentary El Fil Rosa on the memory of the LGBTI movement in Barcelona, to be presented on 28 June, LGBTI Pride Day.

Invitation to the metropolises

The project is a process which is open to metropolises that want to add their experiences of intersectional practices and policies, i.e. experiences of local LGBTI policies that work at the intersection with other axes of inequality, for example:

The metropolises that are part of the "Intersectionality in metropolitan LGBTI policies" pilot project are therefore invited to contribute their experiences until 15 July by means of the downloadable and/or online forms that you can find clicking here.

The result of the collection of experiences, as well as the progress of the final project document (which aims to create a manual for the design and monitoring of LGBTI policies with an intersectional approach), will be analysed at the next meeting to be held in Medellín, in October.  We will continue to move forward in this collective construction, open to the contribution of all cities that wish to add their experience.

• Andrés Scagliola, Coordinator of the Secretariat for Diversity of the Municipality of Montevideo;
• Florencio Chicote, Office for Equal Treatment and against Discrimination of the Berlin Senate;
• Jacqueline L'Hoist, President of the Council to Prevent and Eliminate Discrimination (COPRED) of Mexico City;
• Luz Ángela Alvarez, Secretary of Social Inclusion of the Medellín City Council
• Meritxell Sàez, Technician of the Department for the Promotion of Women's Rights and the LGTBI collective, Direction of Feminisms and LGBTI of the Barcelona City Council;
• Pamela Malewicz, Subsecretary of Human Rights and Cultural Pluralism, Government of the City of Buenos Aires