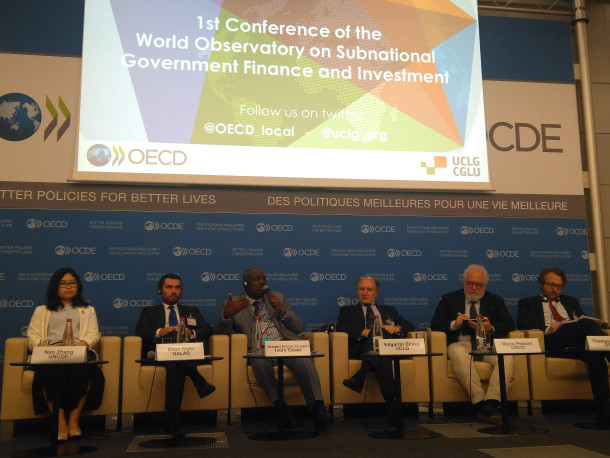 Increase in metropolitan governments is not accompanied by fiscal autonomy

The latest report of the World Observatory on Local Government Finance and Investment (WOFI), released last Monday, shows that the number of metropolitan governance authorities has increased over the past decades. However, they have more limited fiscal power compared to individual municipalities.

The WOFI report (click here to download it) identifies 637,900 sub-national governments in the study of institutional and financial reforms in 122 countries around the world. The analysis and presentation of the publication took place during an international conference on 17 June 2019 at the OECD headquarters in Paris. The conference brought together more than 150 participants from 35 countries. Metropolis, which is a member of WOFI’s Steering Committee, was represented by Mr Ahmed Bouazzi, elected representative of the city of Tunis, Mr Vincent N'cho, Vice-Governor of Abidjan, and by Mr Octavi de la Varga, our Secretary General.

65% of SDG impact on local governments and need them for implementation. However, the institutional reforms necessary for local governments to be able to carry out these objectives and for there to be an improvement in multi-level governance are not being implemented.

In order to analyze this, it is necessary to know what are these political and fiscal frameworks that mark the fields of action of the different levels of government. And here we come up against one of the first difficulties: the data. The availability of reliable data, their comparability and finally their interpretation. Political, social and economic realities are very different around the world and that makes this task difficult.

This is why the OECD and UCLG promoted the World Observatory on Local Government Finance and Investment (WOFI) is an initiative to provide systematized information on decentralization processes, territorial reforms, the competencies and responsibilities of local authorities, and the nature and weight of their revenues, expenditures and investments in a total of 122 countries.

The role of metropolitan governments

In this sense, Octavi de la Varga pointed out during the conference that "the real disruptive element in these institutional reforms are the metropolitan realities". And in his opinion, they are for two reasons. On the one hand, "metropolitan governance structures do not fit into traditional administrative structures that in many cases intersect or overlap". And on the other hand because metropolitan spaces, unlike more traditional administrations, "are mutable realities in constant adaptation to the urban and territorial reality".

In this sense, Mr De la Varga highlighted the need to adapt governance mechanisms to the urban, political, economic and social reality, providing itself with a metropolitan governance structure adapted to its needs, with an adequate and clear competence framework, and accompanied by economic resources and sufficient fiscal autonomy.