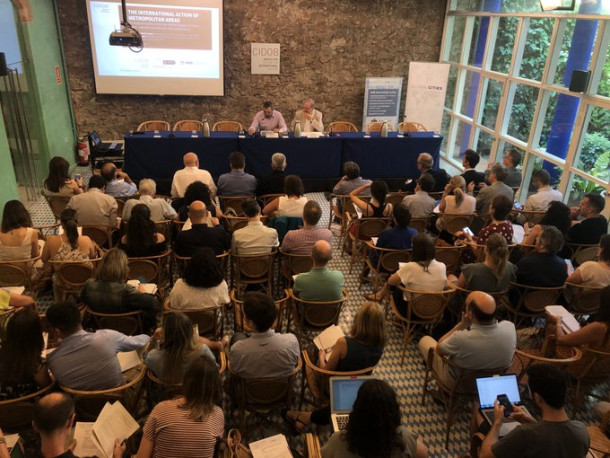 The importance of metropolitan cooperation on international relations

A recent study concludes that institutional fragmentation slows down the construction of international strategies on a metropolitan scale. Without the appropriate governance tools, it is difficult if not impossible to properly measure and compare international public policy.

Metropolises are internationalizing and collaborating at an unprecedented rate, but to truly reap the benefits of these dynamics, they must tackle their internal fragmentations. This is perhaps the most evident conclusion of the study "The International Action of Metropolises", commissioned by the Metropolitan Area of Barcelona (AMB) to CIDOB, which analysed and compared the internationalization strategies of the metropolises of Durban, Medellín, Montréal, Seoul, Vienna and Barcelona.

The study was presented on the 4th and 5th July 2019 during the "Seminar on International Strategies in Metropolitan Areas" organized by the AMB and CIDOB, with the support of AL-LAS, IBEI and Metropolis. Said seminar was attended by representatives of a variety of institutions, including five Metropolis members – Greater Manchester, Medellín, Mexico City, Montevideo and Montréal.

Mr Agustí Fernández (Director of the CIDOB Global Cities Programme), who led the study, focused his presentation on the need for metropolises to improve their definition of governance spaces for international strategy. This is particularly important because it is only through increased integration that governments can clearly measure and evaluate the results obtained and thus be truly accountable and responsive to citizens.

Other speakers remarked  the need to create shared international action strategies in order to achieve the objectives set, in particular those of sharing experiences, attracting talent, new investments and economic growth, all geared towards the improvement of citizens’ quality of life. Following the presentation of the study and a related roundtable, the seminar continued with invitation-only sessions with experts in the field, with the debate divided into three topics, i.e. the economic dimension of metropolitan international action, metropolitan internationalization through human capital and the construction of international metropolitan strategies with local actors.

Another major conclusion highlighted during the debate is that Metropolises exist in a particular space between competition and collaboration, meaning that their strong interest in creating a brand that attracts the best talent and the most wealth is often fulfilled in part through cooperation and the exchange of policy knowledge. By participating in international organizations, metropolitan spaces seek on the one hand to improve their reputation and to influence the international political agenda. On the other hand, though, they understand networks as spaces where they collaborate, share knowledge and resources, and where they position themselves in the face of the challenges they have to face.

All the outcomes of the study “The International Action of Metropolises” will soon be unveiled in a homonym report, which in turn shall serve as the starting point of a new Metropolis Observatory issue paper, expected to be published in December 2019.