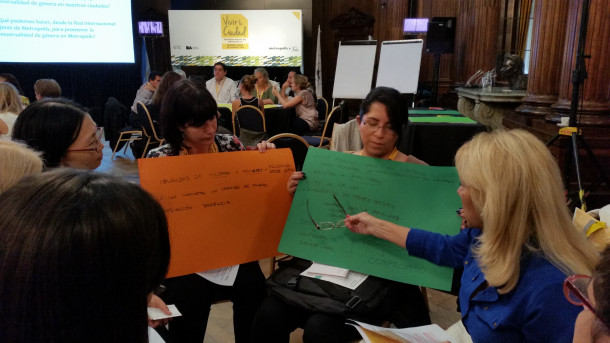 The importance of gender mainstreaming in local policies: the central issue for the Women Network at the Annual Meeting

Seven of the antennas of the Women Network attended the last METROPOLIS Annual Meeting, held in Buenos Aires from 18 to 21 May, to defend the importance of gender mainstreaming in local policies. During a workshop organised by the METROPOLIS Women International Network, Buenos Aires, the host city, and Barcelona and Brussels presented practical case studies that demonstrated the applicability of gender mainstreaming, a subject of considerable debate over the last 20 years since the Fourth World Conference on Women (Beijing, 1995). The second part of the workshop was a participative working session to gather ideas that will promote gender mainstreaming in our cities. The suggestions made included:

The Network also played an active part in the Meeting of the Board of Directors, during which the new 2015-2017 Action Plan was approved. Thanks to the promotional work of the Women Network in recent months, the Action Plan incorporates the gender perspective. The Network’s interest in ensuring that contributions with a gender perspective are also respected as far as possible in the document that METROPOLIS will be presenting at the Habitat III Conference in 2016 was also voiced.

In order to raise the visibility of the Network’s efforts during the drafting and agreeing of a declaration for the UN Conference, Buenos Aires and Barcelona represented the Network at the PrepCity – Getting Ready for Habitat III and the New Urban Agenda session, together with other political representatives of METROPOLIS.

In addition, an internal meeting of the Women Network was held on Monday 18 May, during which, among other issues, there was a discussion concerning the organisation of the Fourth World Forum “Dynamic Cities Need Women” in Latin America in late November, which will be focusing on the issue of gender mainstreaming in public policies.