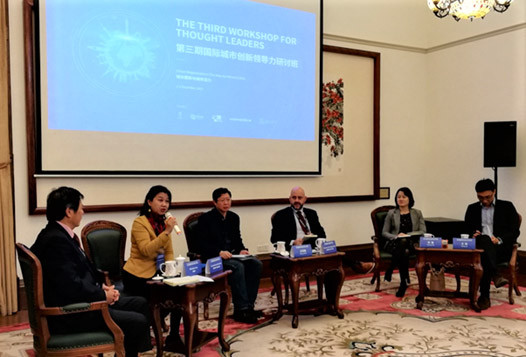 Guangzhou Workshop for Thought Leaders: Pioneering the Way towards a Vibrant City

2 – 6 December 2019 | GUANGZHOU – One of the crucial elements for sustainable urban life is to enable city to contextualise and reshape its various aspects taking into consideration the local conditions and needs. To assist Asia-Pacific cities in this respect, UCLG ASPAC supported Guangzhou City in organising the 3rd Workshop for Thought Leaders, taking theme Urban Regeneration: The Way to Vibrant City.

Conducted regularly under the framework of Guangzhou Urban Innovation Award, Guangzhou City collaborated for the first time with UCLG ASPAC Standing Committee Women in Local Governments, to focus the discussion on women welfare, family friendly urban planning and urban regeneration, as important aspects of a vibrant city. More than 40 distinguished participants from 25 cities and 19 countries, including representatives of international organisations attended to share their knowledge.

Mr. Deng Kanqiang, Deputy Director General of Guangzhou Municipal Planning and Natural Resources Bureau and Mr. Ma Xiangming, Chief Engineer of Guangdong Urban and Rural Planning and Design Institute, shared the experience of Guangzhou in city renewal as well as Development of Bay Area consecutively. The city has been improving the land use by applying protection and development principles including on ecologically important areas, as well as areas with cultural and historical values. In order to boost the economy, Guangzhou city focuses on the development of strategic transportation hub, urban rail-station, high-speed roads and urban main roads. The city also pays attention to tackle social problems. Efforts taken include providing 972 canteens for senior citizens and the formulation of “Three-year Action Plan for the Installation of Elevators in Old Residential Quarters in Guangzhou (2019-2021).”

The city also presented one of its efforts to apply a co-creation approach to transform Yong Qing Fang area. The city involved local citizens, private sectors, urban planners and other relevant stakeholders to discuss their aspirations in making the area more liveable. The project to transform Yong Qing Fang Area started in 2006 to reconstruct dilapidated house. The process was temporarily suspended so that government could listen to local aspirations and gather their inputs. Based on the agreement, private sector has been given permit to operate and manage the area for 15 years.

In relation to discussion on Modern Urban Planning, Urban Renewal and Citizen Experience, participants reflected on the challenges and stressed the importance of striking a balance. Dr. Raymond Yu Wang of Sun Yat Sen University discussed the development of Beijing, Shanghai and Guangzhou, explaining that in the old days people tended to migrate to those cities due to better opportunities and education. Despite the significant economic growth in these three cities, however, people have found that the life in in big cities are more expensive and competitive. Some have even realised that the better opportunities are in fact in their hometown as things are cheaper, better basic services and easier communication and transportation. There is a tendency that people are returning to their hometown after completing education in big cities like Guangzhou. That is where a balance finally takes place. In terms of environment and industry, China is now seeking to balance the environmental approach with industrial development. There is a need to ensure that the economic and industrial development will not affect local people’s livelihood.

According to Dr. Raymond Yu Wang, tackling climate challenge in relation to industry that boost new urban development must consider several approaches, namely institutional approach (by establishing emergency management agency), technology, market approach (by developing community group to prepare), and heavy investment approach. UCLG ASPAC Secretary General Dr. Bernadia Irawati Tjandradewi also added that with the vast development of technology, we actually have to control on how we would like to utilise the technology. Metropolis Secretary General Octavi de la Varga emphasises on the importance of collaboration, as we cannot solve all challenges ourselves. In addition, he mentioned the need to consider indigenous factors and values in tackling challenges.

During the event, the participants engaged in group discussions to analyse the challenges their cities face in developing a vibrant city. It was stressed that vibrant city can only be possible if we have vibrant people living in it. It is important to connect citizens together, and also engage them in the development process. Their involvement should be taken into account in an integrated spatial planning, promoting cultural diversity, fostering social cohesions, widening access to opportunities and services, promoting public-private partners, etc. Furthermore, pollical will and commitment of city leaders were identified as important factors for urban regeneration, especially in response to crisis such as deteriorated environment and health conditions. They are also essential for people-oriented development. Other important conditions for a vibrant city includes good governance, human development and community participation that provide positive environment for economic growth with support of technology.

In conjunction with this year’s Workshop for Thought Leaders, UCLG ASPAC convened a meeting of the Standing Committee of Women in Local Governments (SCWLG). Ms. Chen Yini from Guangzhou city, under her capacity as SCWLG’s Chair, informed the participants about the progress of Guangzhou’s work to promote women and children medical centre. Guangzhou recognises the importance of women’s health, not only for women themselves but also as an indicator for progress on gender equality and women’s empowerment. The presentative of Guangzhou Women and Children’s Medical Centre (GWCMC) also presented their telemedicine programme to connect with other local hospitals in and outside China and provide online consultations for patients’ symptoms. City of Jambi expressed their interest to join in the network. Further discussion between Guangzhou and UCLG ASPAC was held to explore the possibility of conducting joint activities to connect cities that are interested in the telemedicine programme.