Gender Keys: opening the doors of gender mainstreaming at the metropolitan scale

New series of short publications brings insights on how to build metropolises that stop reproducing inequalities, exclusions and segregations

Giving continuity to the implementation of the Metropolis gender mainstreaming strategy, we are proud to present the first issue of Gender Keys, a series of short publications that promotes the incorporation of the gender perspective in metropolitan planning.

“Do metropolises have a gender?” is the title of the Gender Keys #1, which invites everyone to ponder that the major cities of today have not been naturally established. Otherwise, they have been historically built as a result of social conventions, models and practices designed by just a few people, although they are home to most of the planet’s population. In just two pages and with a simplified language, the publication promotes an introduction to gender urban planning applied to a metropolitan scale.

“Gender Keys is one of the strongest statements of our association’s commitment to promoting fairer and more inclusive metropolises, and a contribution to ensure the right to the city for all the people who are increasingly living in metropolitan spaces”, says Silvia Llorente, project officer for Metropolis Women, who coordinates this new project.

The upcoming editions of Gender Keys, expected to be released bimonthly, will take the concepts introduced in this first issue to the metropolitan grounds, bringing examples from our members which are, in different parts of the world, using gender approaches to deliver better public policies and services in fields as varied as public space design and building, governance structures, mobility, security and environmental sustainability.

The Gender Keys collection will be fully available for free download at the “Metropolitan Library” section of our website. 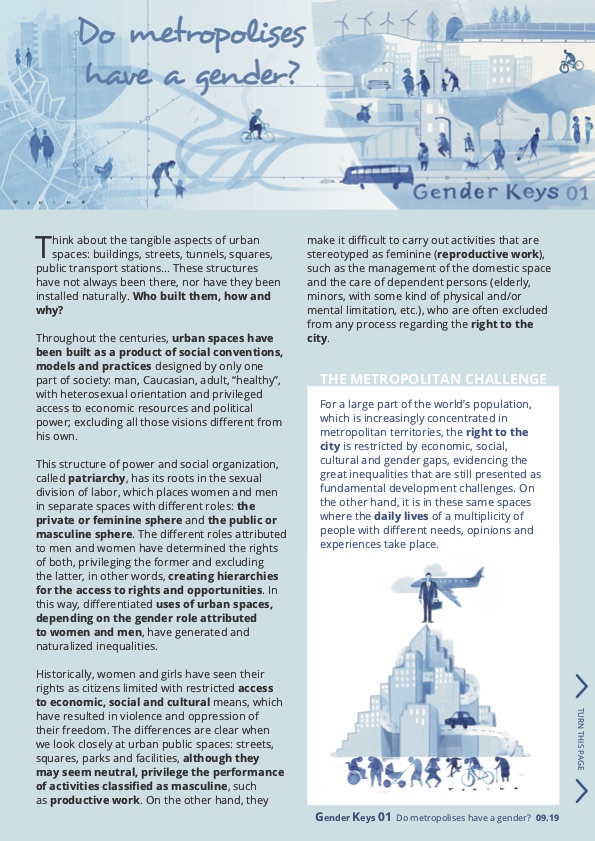 Gender Keys #1
Copyright on this site is licensed under a Commons Attribution-NonCommercial-ShareAlike 4.0 International License
Website by Punt Zero