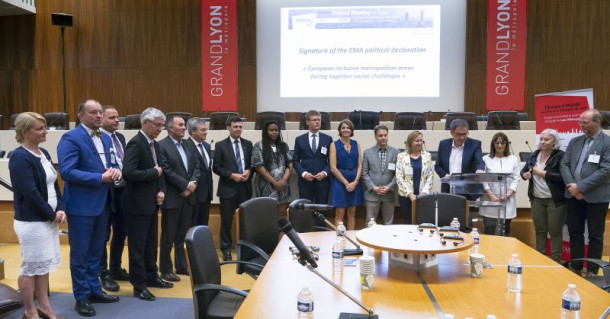 European metropolitan areas get together for social cohesion

Last June 5,  Grand Lyon hosted  the  European  Metropolitan  Authorities  (EMA)  forum,  an  initiative  led  by  the  Metropolitan  Area of Barcelona which is the space of reference for the metropolises of the region to share experiences, foster joint projects and position themselves

On its fifth edition, the yearly conference took a step further in the discussions about the roles and responsibilities of metropolitan governments, which go beyond the implementation of hard policies and infrastructures. With the theme “European inclusive metropolitan areas facing together social challenges”, the V EMA brought together different models of metropolitan governance for and by citizens.

Representatives of 26 metropolitan authorities participated in the event, which was inaugurated by the President of the Metropolis of Grand Lyon, Mr David Kimelfeld, and counted on the attendance of other five Metropolis European members (Berlin, Brussels, Greater Manchester, Madrid and Torino). Mr Kimelfeld invited the representatives of all metropolises present to sign the forum’s political declaration, in order to continue their collaboration within the EMA network in the service of a Europe based on solidarity and close to the concerns of its citizens. Click here to read the  Political Declaration of the 5th EMA.

The conference featured keynote speeches from representatives from the European Commission, the academia and research organisations. Moreover, the core of the one-day programme was structured into three roundtables inspired by the report “European Pillar of Social Rights – The role of metropolitan areas in social issues”, recently launched by CIDOB. The discussions took place as follows:

3. "Urban planning for all: providing social solutions for differentiated needs" From children to senior citizens: how metropolises design and adapt the city for and with everybody?
Moderated by Alfredo Corbalan, expert on International, European and Interregional Affairs of Perspective Brussels, from the Brussels Capital Region.

Traditionally organised during the second semester of the year, the EMA conference was convened in 2019 in early June to seize the occasion of 2nd International Social Housing Festival, also hosted by Grand Lyon from June 4-8.  This offered the opportunity to include in the programme of EMA a field visit to “L’Autre Soie”, a former silk factory that today is the location for the European project "Home Silk Road – Housing toward empowerment", which innovatively combines solutions on affordable housing, social economy and sustainable development.