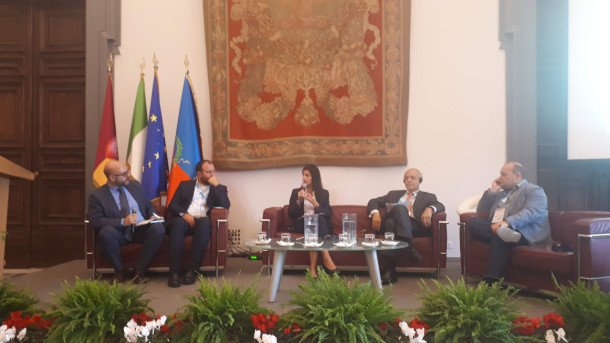 “Europe of the Metropolises”: the 4th European Metropolitan Authorities forum in Rome

Last October 25 and 26,  Rome hosted  the  European  Metropolitan  Authorities  (EMA)  forum,  an  initiative  led  by  the  Barcelona  Metropolitan  Area.  On its fourth edition, the yearly conference has consolidated itself as the space of reference for the metropolises of the region to share experiences, foster joint projects and position themselves towards the European Union and national states. This year, the debates revolved around new metropolitan challenges regarding the environment, sustainable mobility and the global economy and social policies.

Ms Anna Merlin, Councillor of Institutional affairs and European and international relations and projects of the metropolis of Torino, was one of the speakers of the event’s first discussion panel, dedicated to environmental policies. She underlined the concrete measures taken by her metropolitan government to tackle climate change, such as the implementation of green public procurement, the bans on polluting vehicules and investments in education from the earliest ages. In Torino, young metropolitan citizens are taught in school to cultivate green areas and measure grean house gas emissions, in a legacy for future generations.

The Metropolis Secretary General, Octavi de la Varga, in turn, moderated the last discussion panel of the conference, on October 26 about the impacts of globalization on metropolitan economies. One of the main conclusions of this panel is that metropolitan areas are key to face the challenges of economies in transition: as hubs of resources and opportunities, they are more than just the sum of municipalities, they are rather coordinated territories that are proposing new relations of work, production and consumption that emerge from citizen participation, and from the intelligence that lies in the use of technology by communities.

The  conference  culminated  with  the  signature  of  the  Rome  Declaration  by  all  its  participants.  This  document  asserts the commitment of European Metropolitan Authorities the continuation of political programmes based on cohesion, maintaining the current level of investment in regard to the European Union's financial budget after 2020, the strengthening of cohesion policies in the urban and metropolitan scope, and being active partners in the projection, execution and achievement of results. Click  here  to  read  the  Rome Declaration [falta link].

EMA  is  an  initiative  promoted  by  the  Barcelona  Metropolitan  Area,  which  has  become  a  consolidated  forum  for  the  leaders  of  Europe's  major  metropolitan  areas.  Its previous editions took place in  Barcelona (2015), Torino (2016) and Warsaw (2017). EMA’s 5th edition will take place in June 2019 and will be hosted by the metropolis of Grand Lyon.