CSW65: Fighting for gender equality from a metropolitan perspective

The 65th session of the United Nations Commission on the Status of Women (CSW65) took place this year from 15 to 26 March. The main aim of the UN’s largest annual gathering on gender equality and women’s empowerment was to explore how to promote women’s full and effective participation and decision-making in public life, as well as the elimination of violence.

Metropolis Secretary General Octavi de la Varga had the opportunity to talk about the impact of women leaders on building a new urban narrative. There can be no doubt that, thanks to female leadership, our organisation integrates gender mainstreaming and works on policies related to caring cities, the informal economy, and the use of space from a gender perspective. In De la Varga’s words, “gender equality is everybody’s business. We need to create cities that are safe and accessible for all and incorporate different uses of public space.”

A Local and Regional Governments’ Day was organised under the framework of the CSW65 session, featuring a wide range of different events under the overarching title ‘Feminist municipalism – Local to Global Women Leadership & Decision-making’. Organised by United Cities and Local Governments (UCLG), the events were attended by several Metropolis members.

One of the members in attendance was Ada Colau, Mayor of Barcelona and UCLG Special Envoy to the United Nations, who advocated for cities' key role in transforming diplomacy, collaboration and feminist leadership. Posing the question of how cities can achieve this, she stated the need to change priorities, putting care first and promoting empathy and cooperation.

“We must promote a new social contract where care work does not reduce women's opportunities to access education and, therefore, does not impact their financial and political autonomy”, Claudia López

Care work and the challenges surrounding it was also a focus for Claudia López, Mayor of Bogotá, who said: “We must promote a new social contract where care work does not reduce women's opportunities to access education and, therefore, does not impact their financial and political autonomy.” López also explained that her government has decided to set up the first district-based system of care in Latin America, to transform the social contract in order to “care for the women who care for us and relieve them of the burden of care.”

“The fight for equality is not only about parity, but it is also about well-being and development”, Fatimatou Abdel Malick

Meanwhile, Fatimatou Abdel Malick, President of the Nouakchott Region and Co-Chair of the UCLG Policy Council on Resilient Cities, explained that the women’s struggle continues at an African and international level. She highlighted that it is essential to promote, raise awareness and support elected women: “The fight for equality is not only about parity, but it is also about well-being and development.” 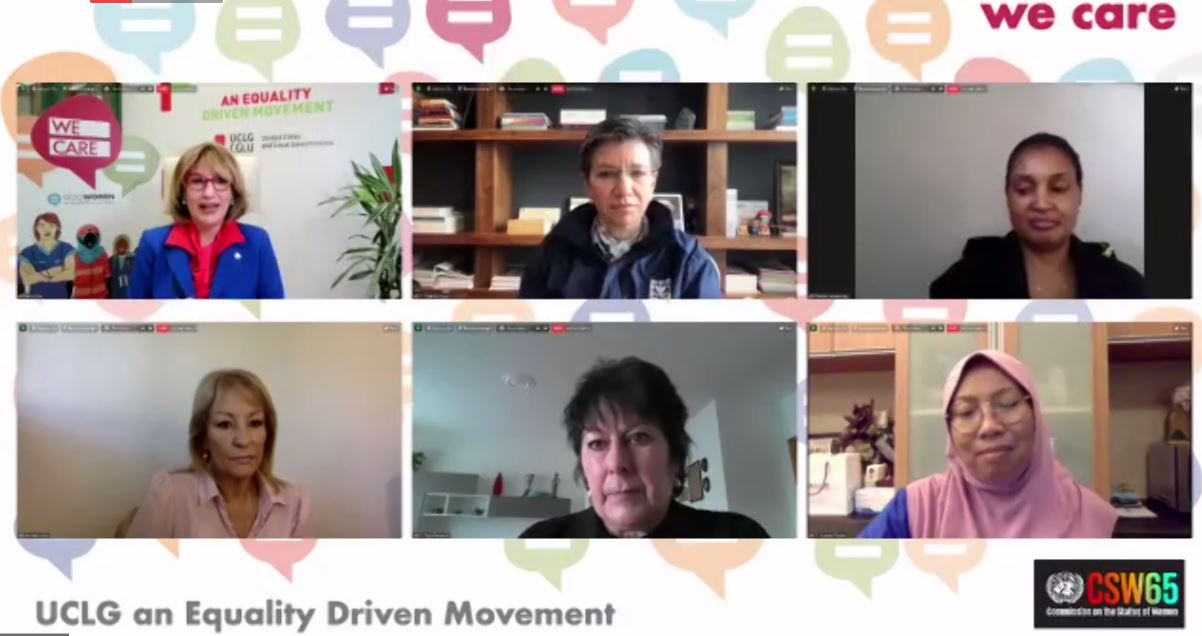 To conclude, it is also worth mentioning participants' reflections on equality in future generations. Annie Chrystel Limbourg Iwenga, Vice-Mayor of Libreville, remarked on the need for better education on gender equality, in order to stop seeing women as a cost and start seeing women as an investment. Referring to the current situation, Suzie Miron, President of the Municipal Council of Montréal and Councillor of Tétreaultville District, advocated for recovery plans that get women back to work and promote gender equality.