Contribution to the Global Compact for Safe, Orderly and Regular Migration

From December 4th to 6th in Puerta Vallarta, Mexico, was held the stocktaking meeting of the Intergovernmental Conference to adopt the Global Compact for Safe, Orderly and Regular Migration.

The definition of this pact is part of the New York Declaration on Refugees and Migrants (Resolution adopted by the General Assembly on 19 September 2016 (A / 71 / L.1), and is expected to be adopted 2018. Negotiated under the auspices of the United Nations, it will intend to improve coordination on international migration while providing a framework for global international cooperation on migration and human mobility.

It was during this stocktaking meeting that Ms. Valérie Plante, the new Mayor of Montréal, presented a position paper submitted by Metropolis to the Global Compact for Safe, Orderly and Regular Migration and the Global Compact for Refugees, also included in the New York Declaration. The Metropolis position paper had previously been sent to Mrs. Louise Arbor, Special Representative of the Secretary-General for International Migration, to Mr. Filippo Grandi, 11th United Nations High Commissioner for Refugees (UNHCR), as well as to the Secretary General of the United Nations.

Metropolis’ position paper, was backed up by the 136 members of the network, and aims to recognize and highlight the key role played by cities in terms of migration, diversity management and inclusion and it will take steps to implement the SDGs and the New Urban Agenda, as well as to contribute to developing the Compacts. The aim is to ensure the Compact processes take into account the unique, frontline role cities play in migration, and to use city experiences to inform the Compacts while asserting local leaders’ roles and responsibilities in this area.

The Metropolis’ position paper received the support of the following cities, non-members of Metropolis: 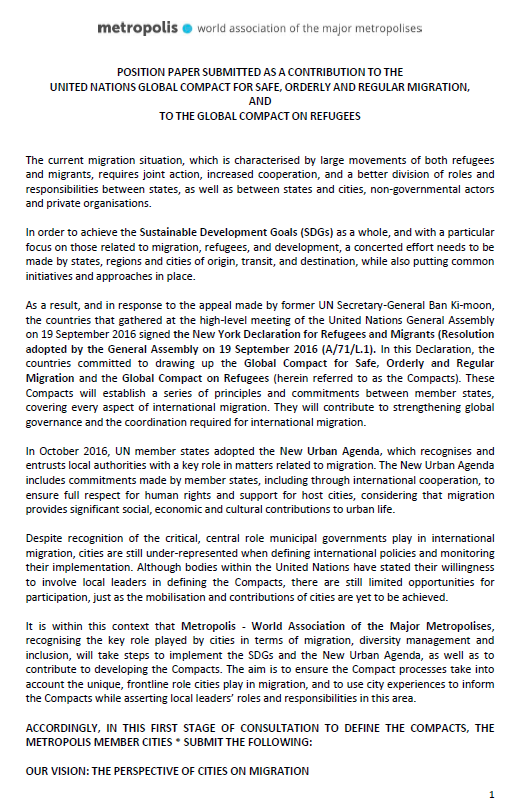 Documents:
Copyright on this site is licensed under a Commons Attribution-NonCommercial-ShareAlike 4.0 International License
Website by Punt Zero