The Metropolitan Area of Barcelona (AMB) held the final conference of the Climate Metropole+ initiative, aimed at addressing the main challenges of adaptating to climate change and the actions to take in order to cope with them.

The event was organized by the environment department of AMB, and served to present the conclusions of the project and the future initiatives which resulted from the exchange of experiences between the metropolitan areas of Barcelona, Berlin, Liverpool and Lyon. One of the main conclusions of this period of collaboration was that climate change has to be understood from a holistic point of view, in which the environmental, political, economic and cultural dimensions must be approached hand in hand. In this sense, climate change adaptation requires the collaboration of all the parties involved to address the problem and raise optimal solutions from different areas. Some examples of this type of collaboration are the AMB’s Metropolitan Observatory of Climate Change (METROBS), and the observatory of Lyon. It is considered that it is necessary to promote interdepartmental approaches and partnerships between the public and private sector, also implicating the citizenship in the process.

Eloi Badia, vicepresident of environment of AMB, opened the conference by welcoming the participants. For its part, the Octavi Varga, executive director of Metropolis, presented the main challenges of the urban areas in the world and noted the initiative Climate Metropole as an example of the type of collaborative projects promoted by our association. The coordinators of the initiative, Ana Romero (AMB), Luce Ponsar (Lyon) and Vicki O'Kelly (Liverpool), presented the main lessons learned from the project and the desire to continue with a more ambitious future project in the framework of the adaptation and citizen awareness.

Launched in June 2015, the Climate Metropole+ initiative comes to an end after having promoted the exchange and generation of knowledge about the different measures and actions for articulating policies of climate change adaptation in cities; all this through seminars and workshops and the first-hand observation of the actions of the four cities involved in the initiative. To check thouroughly  the outcomes  of this project, we invite you to download its final report, which is available in our library.

You can also read here the report of this event 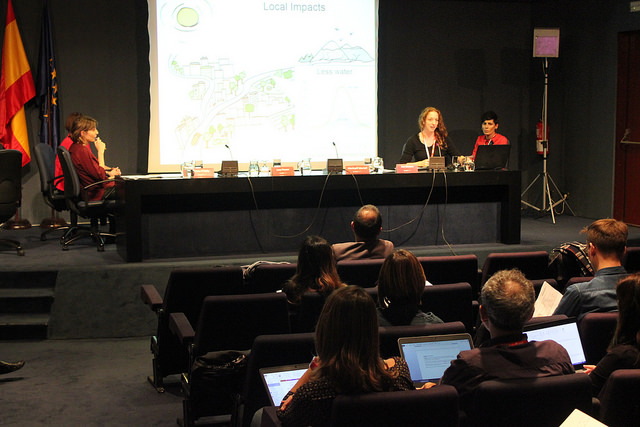