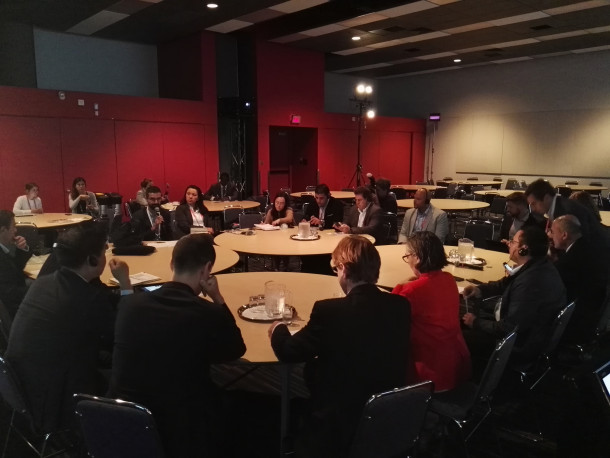 On June 20, at the XII Metropolis World Congress in Montréal, Metropolis and UCLG Learning organized a peer-review session in which City Managers showcased the dealing conflicts between efficient collection and use of data versus privacy protection and prevention of data misuse.

Nowadays, Smart cities have been introduced in different cities world widely. To be a Smart city means gaining information through the use of technology to enable the development of efficient and effective services for citizens.

The session in Montréal was moderated by Pilar Conesa, CEO of Anteverti and Smart City Expo World Congress. After a warm welcome by Felip Roca, former Secretary General of Metropolis, Harout Chitilian, from Montréal, opened the session with the current status of the Smart City policy in Montréal, one of the most advanced governments in the use of open data. The case of Montréal was followed by testimonials from the representatives of Barcelona, Durban, La Paz, Valle de Aburrá and Seoul.

According to Adrian Peters from the Ethekwini Municipality (Durban), “open data is an essential product of being smart city and it stimulates the economic development through service innovation, efficiency and the renovation of infrastructure”.

The challenge for Barcelona Metropolitan Area, in the words of Eduard Saurina, is to “internally break the barrier among the departments and to share data and information with the private institutions”.

Eugenio Prieto said that in Metropolitan Area of Valle de Aburrá, intergovernmental cooperation is necessary for data protection, while Sergio Caballero, from La Paz, explained how data is used to study the social well-being rate of the city.

Jong-Sung Hwang, former CEO from the Seoul Metropolitan Government, stated that by data management, government provides intelligent services, but at the same time has to deal with the risk of acting as a dig nudging and manipulating citizen behaviour.

Alexander Heichlinger, from the European Institute of Public Administration (EIPA) wrapped up the session concluding that becoming a smart city requires a strategy for being also a global city.