Citizens from megacities receive recognition for their urban documentaries

This year Metropolis has started a partnership with the film festival MegaCities ShortDocs (MC-SD). Founded in 2014, the Parisian association MC-SD brings together short documentary films that reflect the challenges faced by megacities – urban areas with more than 10 million inhabitants. There are 38 megacities in the world today, and 24 of them are already members of Metropolis. The best short documentaries in the 2017 festival were shown on 19 October in Paris. The screening session was attended by Agnès Bickart, Head of Institutional Relations at the Metropolis Secretariat General.

The festival brings together short documentaries (less than 4 minutes long), produced by citizens from around the world, and showcasing social innovation, eco-citizen urbanism, and civic technology solutions that improve people's lives, in order to inspire new initiatives around the world. Amateur documentary makers, whether urban planners, journalism and media students, entrepreneurs or activists, have responded to MC-SD's initiative and their videos show specific solutions devised for and by city inhabitants, as well as by local associations, international organisations, public authorities, government institutions and companies.

"The video testimonials by megacitizens from around the world echo the major challenges facing megacities, and are a crucial showcase for good metropolitan governance. A highlight of this citizen platform is that local authorities are not staying at the sidelines when dealing with these citizen issues, and are becoming more aware of the priorities highlighted by these urban initiatives, which are also a source of inspiration for other cities. This festival acts as leverage for metropolitan governance to adapt to the needs of civil society", said Mrs. Bickart.

In the "Social Impact" category, the award for best report on a positive solution went to a documentary on an urban agriculture project in Delhi titled "Back to the Roots".

The award in the Eco-citizen Urbanism category went to the documentary "Art for Urban Change", which shows a community project on the Pasig River, an initiative led by the municipal government of Manila:

In the "Smart Cities and Civic Tech initiative" category, the award went to "Food Loss", a documentary on a food waste recycling project in the Tokyo metropolis:

2017 - RIO - 4 min - The Valongo Wharf, an antidote for Brazil (winner in the Student award category)

The ceremony was presided over by Amirul Arham, a Bangladeshi cinematographer whose work includes "Le banquier des humbles", "Les oubliés du Bangladesh", and "L’eau du diable", which received a series of nominations and awards. He is currently making a documentary film on Professor Muhammad Yunus' idea for "Social Business". 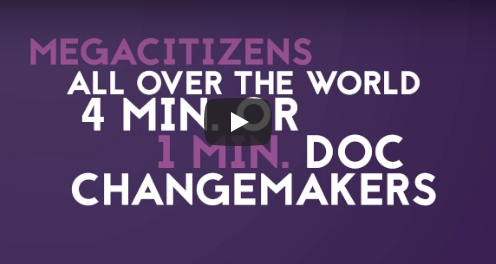