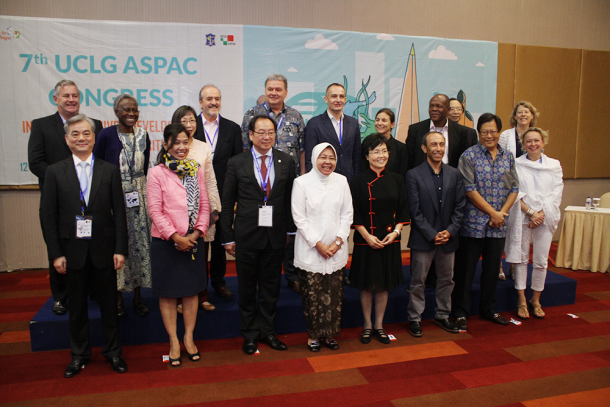 As the celebrations of the 4thGuangzhou International Award for Urban Innovation approach (next December 6-8), one of the last steps towards the selection of the winners took place last September 12 during the 7th UCLG ASPAC Congress in Surabaya: the disclosure of the award’s shortlisted projects, from 15 local governments: eThekwini/Durban, Guadalajara, Kazan, Mezitli, Milan, New York, Repentigny, Salvador, Santa Ana, Santa Fe, Surabaya, Sydney, Utrecht, Wuhan and Yiwu. Promoting citizen engagement to deal with issues that vary from water and waste management to social cohesion and metropolitan governance, all shortlisted projects are closely linked to the implementation of the Sustainable Development Goals (SDGs).

Find out more about the shortlisted projects from the Metropolis membership:

Incremental, Participatory, Programmatic Informal Settlement Upgrading Programme
This programme incorporates social and economic opportunities that transform settlements into truly liveable and sustainable neighbourhoods. Focused on upgrading urban infrastructure and creating job opportunities, the initiative will benefit 70,000 households within six years. It conforms proportionally to SDG11 on sustainable cities and communities, as it will enable residents to access education and health services and contributes to social cohesion, spatial justice and urban integration.

Partnerships with the Private Sector to Achieve Sustainable Sanitation Service Provision
This is an approach to explore often neglected critical parts of sanitation value chain in Africa: disposal, recycle and reuse. It focuses on improving the health indicators of the residents through safe sanitation practice; reducing the municipal expenses on sanitation; increasing private sector’s participation and earnings; and on increasing the capacity of the government’s institutions on sanitation marketing. It specifically addresses SDG6 on clean water and sanitation.

Citizen-led Metropolitan Coordination
The Mexican State of Jalisco and the nine municipalities comprising the metropolitan area of Guadalajara, which is home 4,5 million people, got together to face fragmented planning and governance by individual municipalities. This multi-level governance coordination resulted in the creation of IMEPLAN, the Metropolitan Institute of Planning, whose central purpose is to engage citizens, experts and municipalities into participatory planning process at the metropolitan scale through collaborative roundtables, workshops and an educational programme.  The activities encourage all stakeholders to imagine, innovate and plan at the metropolitan scale. It is focused on reducing the negative impacts of unplanned urban development. Part of the initiative's merits was that it overcame traditional political forces that undermine metropolitan governance. This project is a remarkable example of a metropolitan authority which was founded through community leadership. Even though the initiative is relatively new, it has gained traction in a short period of time with a strong focus on controlling sprawl, contributing directly to SDG11 and SDG16, on peace, justice and strong institutions.

Public Participatory in 3R Waste management for Better Surabaya
Against a background of increasing waste generation, with the degradation of the environment and of human health, this program is strongly and widely based on community engagement, which propelled a social movement towards reducing, reusing & recycling. The Surabaya City Government played a key role in this movement, taking an innovative approach to link waste disposal with mobility needs: it allows citizens to pay for their bus rides with used plastic bottles or cups – the buses accept either three 1.5 litre plastic bottles, five used 600ml ones, or ten plastic cups as the equivalent for a ticket with a two-hour time validity. The program also adopts measures to create an economically sustainable waste management, monitoring and reporting system: the city now has 300 recyclable garbage banks and 26 organic waste processing centres, which are suppliers of natural agricultural fertilisers and of mature larvae that cleanse the water of the ponds of the city’s public parks. The initiative contributes to SDG3, on health and well-being, as well as to SDG6, SDG7 (affordable and clean energy), and, overall, to SDG11.

The Nirvana of a City’s Landfill: improvement of the biological environment as a trump card
This project transformed the Jinkou Landfill, one of the largest landfills in Asia, into a recreational park and garden. Along with the polluted Zhanggong Dyke, this landfill had troubled Wuhan citizens for decades. Their restoration created a 50.5 km long ecological belt, covering an area of over 170 sq. km and providing an urban forest for pedestrians and cyclists. The project benefited the lives of 400,000 people who live in the 14 communities adjacent to the park, improving their living environment and reducing inequalities. The largest application of aerobiotic technology for landfill remediation, and the biggest ecological bridge in China, this project involves different city government departments, as well as experts from 82 Chinese cities and 12 countries. It is also innovative in funding aspects, as it is partially financed through crowdfunding mechanisms, which enhance citizens’ engagement and sense of ownership. The initiative contributes to SDG6, SDG9 (industry innovation and infrastructure), SDG10 (reduced inequalities) and, overall, to SDG11.

Innovating Foreign Service initiatives
A forward-looking and all-inclusive approach towards integrating Yiwu’s growing international population, this programme covers a wide range of strategies, including the development of the first mediation forum in China for foreign-related business, a 1-stop service for international trade transactions, an international family programme to strengthen bonds between local and foreign residents, and the issuing of a foreign merchant card to help foreigners access public services that are provided to local Chinese, among others. The vision is to create a good business and living environment for both local and foreign residents, to promote mutual understanding and a better sense of integration. Yiwu has taken the bold measure of improving the living environment for foreigners as the yardstick to measure its improvement in living environment for all its residents. While promoting economic prosperity in a rapidly globalizing society, Yiwu is contributing to the achievement of SDG10 and SDG16.

The shortlisted projects were chosen after the thorough evaluation of an independent technical committee, which examined a total of 273 eligible applications submitted by 193 local governments from 66 countries. The technical committee was composed of the following experts:

The members of the technical committee met in Surabaya for the official ceremony of public disclosure of the award’s finalists. Ms Agnès Bickart, senior manager for institutional relations at the Secretariat General, also participated in the event. Along with Honourable Mayor of Surabaya Mrs Tri Rsimaharini, the Vice Chair of Guangzhou Municipal CPPCC Ms Chzn Yini, the Vice President of CPAFFC Mr Song Jingwu, and the Secretary General of ULCG Aspac Ms Bernardia Irawati Tjandradewi, she delivered a speech and certificates to the technical committee members. Among the attendees of the ceremony, the presence of representatives of some of member metropolises was noticed, namely: Chengdu, Bogor, CPAFCC, Daegu, Fuzhou, Hanghzou, Guangzhou, New Taipei, Seoul, South Tangerang, Surabaya, Taipei, Taichung, Wuhan, and Yiwu.

“In common, all these outstanding projects are innovative because they are somehow changing the way we govern, plan and manage our cities. Urban Innovation, with the engagement of local communities, is one the most powerful tools of our time.  In the process, our local governments need to strengthen the participation of citizens in deciding the future of the places they live”, stated Ms Bickart.

The committee also acknowledged 30 deserving local governments for their achievements in urban innovation. This list includes the following initiatives from Metropolis members:

To check the complete lists of shortlisted and distinguished projects, please visit the website of the Guangzhou International Award for Urban Innovation.