Cities Are Listening: local and regional governments aiming towards a sustainable recovery

The pandemic has put local and regional governments under strain, but it has also given them the opportunity to learn by doing and find appropriate solutions to new challenges. Now, cities are ready to listen to citizens’ voices. For this reason, Metropolis, UCLG and UN-Habitat have come together to promote the ‘Cities Are Listening’ initiative, which provides a space for collaboration, and a place to find responses to current urban and social issues together.

Focusing on a number of different topics, these sessions aim to rethink the classic approach to urban policy and design, by considering a range of stakeholders’ interests. ‘Cities Are Listening’ aims to continue along the path of the ‘Live Learning Experiences’—held from March to July 2020—by integrating the voices of both citizens and local and regional governments in a more dynamic and complex discussion on the future of urban areas.

Between 17 and 19 November, three panels were organised under this framework, in collaboration with Open Society Foundations, featuring 12 frontline activists who discussed the rise of mandatory detention, assessing the current situation and explaining how a world without mandatory detention would work in everyone’s benefit. This collective reflection aimed to rethink current approaches that have proved inefficient, bringing local, national and international governments and institutions to an open discussion towards a community-led vision for 2045 that places people, care, and social justice as the main focus. Raising awareness on the fragility and inconsistency of the entire mandatory detention system, the speakers highlighted the role of racial, economic, gender and sexual discrimination in creating a biased justice system that promotes inequality, especially in major urban and metropolitan areas.

“Everywhere in the world, the principal victims of mandatory detentions are racial minorities.” - Aryeh Neier, President of Open Society Foundations

“In the UK, 35% of people in jail are black or from minorities.” - Deborah Coles, Executive Director of Inquest

“You are criminalised for being a sex worker, but on top of that for being a woman, transsexual, and HIV positive.” - Kenya Cuevas, Director of Casas de las Muñecas

If, on the one hand, the current situation has highlighted awareness on the subject, on the other hand, a historical analysis of colonialism has helped us understand it as the main trigger for the establishment of the mandatory detention system throughout the world.

Finally, a broader perspective on the justice system made speakers look at the situation from a new viewpoint, as raised by UCLG Secretary General Emilia Saiz’s question: “We have constructed societies where we accept inequality. How can we ensure that the future will be different?” 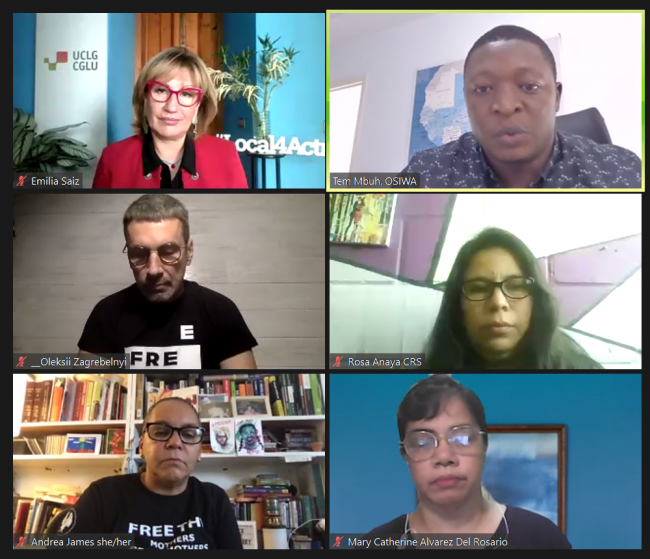 “The key problem of penitentiary systems is the fact that they exist. The concept of prisons is inefficient. [...] Entire social institutions are based on the fear of prison. [...] Prisons must change: they must be a place to become a bit better.” - Oleksii Zagrebelnyi, Founder of FreeZone.

Juan Mendez, former UN Special Rapporteur on Torture and Other Cruel, Inhuman or Degrading Treatment or Punishment, added: “We have to been able to convince people that the best way to combat crime is the alternative to sentencing, and to detention.”

Ultimately the session contributed to the UN75 discussion, defining the expected role of the United Nations in multilateral global structure.

“We need support to shift the current narrative [...] and the UN could amplify our voices and give us a global platform to talk” claimed Andrea James, co-founder and Director of the National Council for Incarcerated and Formerly Incarcerated Women and Girls (USA).

November ended with another #CitiesAreListening webinar, titled ‘Children on the Move’. Focusing on the topic of young urban migrants, the session was attended by representatives from all the organising institutions (UCLG, Metropolis, UN-Habitat, UNICEF and MC2CM).

“We have been calling for a better reality, not a new normality.” Emilia Saiz, UCLG Secretary General, opened the session by explaining the new approach of this second phase of local reflections on the pandemic: “We now need to focus on mid-to-long term priorities.”

“This discussion around young migrants is timely. [...] What will remain after the crisis?”, Oscar Chamat

On the other hand, Oscar Chamat, Metropolis’ Research and Policy Officer and Focal Point for Latin America, gave some input to start the technical debate among local governments: “This discussion around young migrants is timely. [...] What will remain after the crisis?”

In the second part of the webinar, two members of Metropolis —Quito and Tehran—, contributed to the conversation by presenting their innovative urban approach to the matter.

“In Quito we have recently approved the first ordinance to eradicate child labour. [...] It is key to make the story of migration more complex, [because] in some contexts, child or adolescent labour is normalised”, stated Gissela Chalá, Vice Mayor of Quito.

“We opened 24 educational aid and assistance centres in different parts of Tehran. [...] Solving children’s problems has always been part of our strategy: Tehran wants to be a child-friendly city”, highlighted Dr. Javadi Yeganeh, Deputy Mayor for Social and Cultural Affairs of Tehran Municipality.

Overall, the discussion pointed out the need to tackle “different intersections of vulnerability”, as mentioned by Ana Feder, Regional Portfolio Manager at the International Centre for Migration Policy Development, as they make life in urban areas increasingly unequal.

During December, UCLG, Metropolis and UN-Habitat, in collaboration with different partners, will organise several other sessions of the Cities Are Listening initiative: see our agenda to find out more! 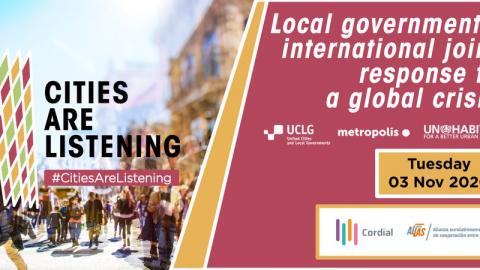 What’s next for city networks following the pandemic?
Copyright on this site is licensed under a Commons Attribution-NonCommercial-ShareAlike 4.0 International License
Website by Punt Zero