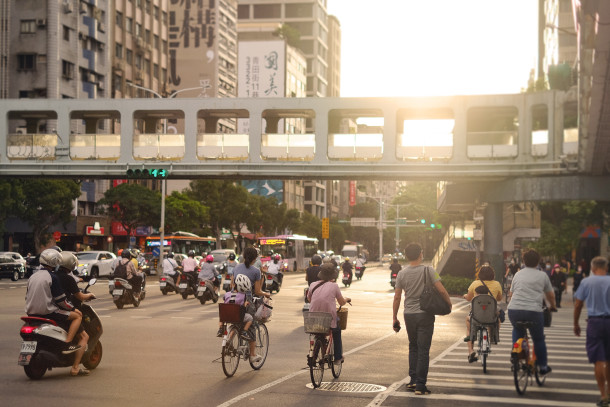 “Cities were born before nations,” said Denis Coderre, former Metropolis President at the MetroSolutions  international congress. Marking the 5th year since the United Nations’ New Urban Agenda was adopted, 2022 is a time to reflect and assess our progress toward the Sustainable Development Goals. This stock-taking was the key focus during the Barcelona Metropolitan Area’s international congress, MetroSolutions. The conference provided a space to continue the debate on how best to meet citizens’ economic, social, and health needs. Leaders worldwide joined together to share these challenges and most importantly, solutions they’ve implemented.

Over the past two years, the COVID-19 pandemic has shaken cities to their core. The pandemic has created new urban threats and exacerbated existing ones. As climate change accelerates and war in Ukraine continues, geopolitical shifts as cities adapt to these challenges. These are shared struggles. Despite varying contexts and unique circumstances, metropolitan leaders continue to identify similar challenges related to governance, equity, and climate resilience. This common thread enables leaders to learn from one another, making the solutions transferable and scalable. Above all, they have a direct local impact.

This year’s conference zeroed in on something often misunderstood or worse yet, ignored in planning. If cities are born before nations, informality is born before formality. However, due to the hard-to-define nature of this concept, it’s often left untouched by leaders. 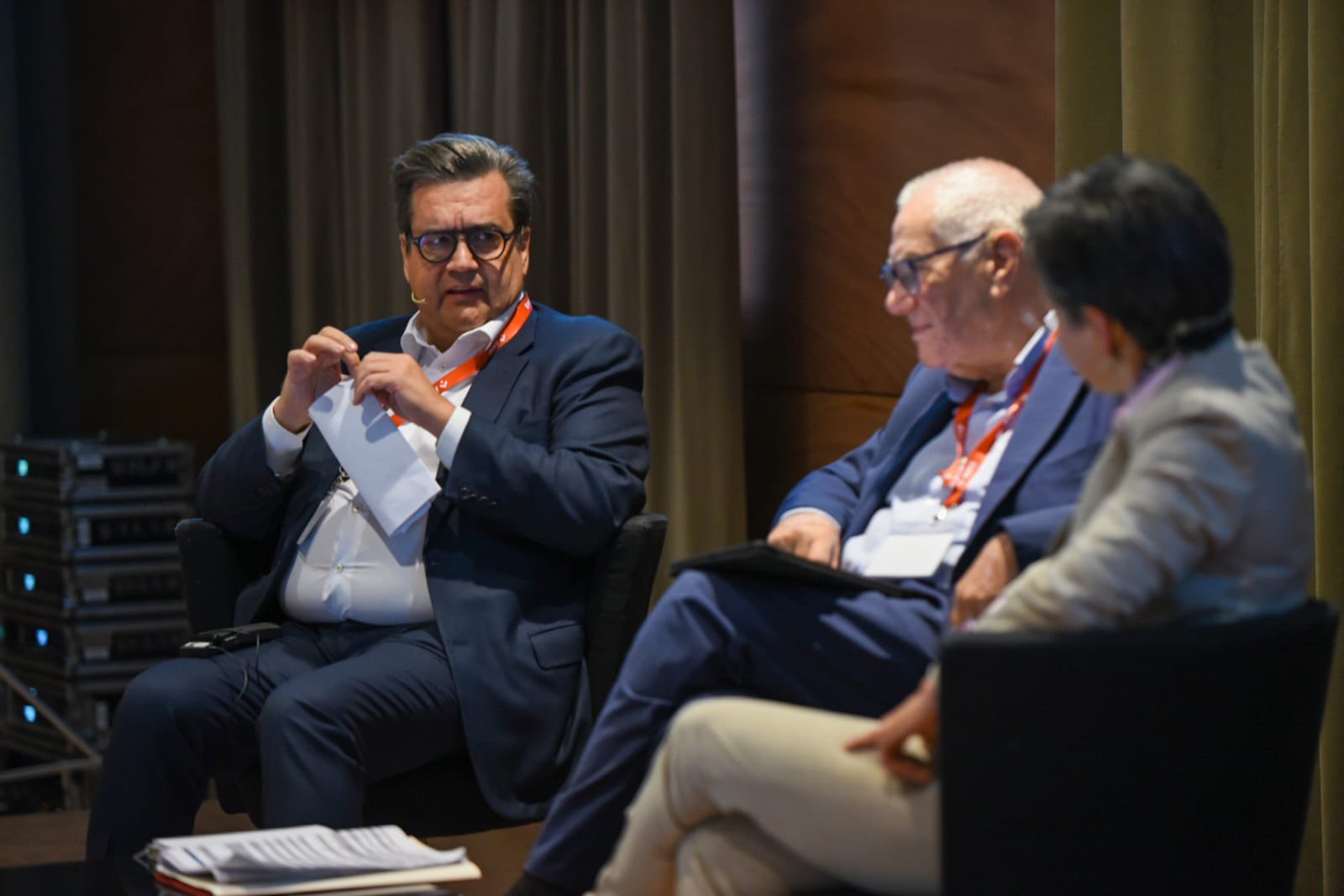 There is much discourse on what informality is and isn’t. The simple meaning of the word implies that informality is simply the negation of formality, but the word does not simply signify that something is illegal or unregulated. This dichotomic perspective of informality does more harm than good. It perpetuates the idea that formality equates to regulated, safe, and legal. This would characterise informality in quite a negative light.

In reality, informality is its own multi-dimensional concept and in its most basic form, a mode of production. When citizens are unable to participate in the formal sector and the government is unable to meet the needs of the population, the informal sector fills the gap. It spans housing, economy, land management, and urban planning. Though the presentation of informality may differ across cities, informal realities are a persistent part of the urban fabric in all cities. The informal sector reveals the formal sector’s gaps and shortcomings and metropolitan leaders have an obligation to them.

The United Nations estimates that one in four city dwellers live in “precarious conditions, without access to basic services or adequate housing and are excluded from health, education, and livelihood opportunities.” With such a high percentage of the world’s population living in them, informality deserves our attention.

While informality is often treated as criminal, the real risk of informality is segregation. Segregation is not only a product of inequality, but it also reinforces inequalities. When there is a lack of regulation, the community also lacks the benefits provided by regulation such as improved safety. This, combined with the fact that they typically occupy marginal, flood, and drought-prone land means that these communities are being hit the hardest by climate change.

When governments ignore informality, they further exclude them from urban systems, resources, and opportunities. Too often informal settlements are excluded from maps, planning documents and even literally erased, removed altogether leaving its residents displaced. This is not only true in housing but can also clearly be observed in the economy. According to Mayor Claudia López, “Half of the economy is informal, so half of the jobs are informal. They don’t have pensions or health insurance. There is no care when you are sick or when you age.” Mayor López incites the question, “So who takes care of them? It’s the unpaid care women who do that … who don't have jobs, or education, or even time for themselves because they are caregivers of others.” 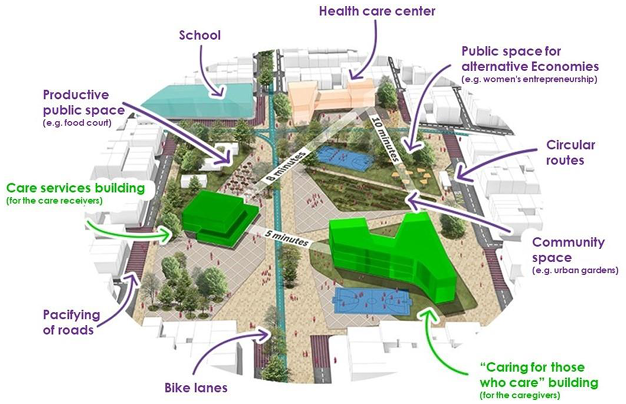 1.2 million out of 4 million women in Bogotá carry out unpaid care work full-time. This separation from the formal economy and full-time commitment leaves many women without the opportunity to receive an education, accumulate wealth, and contributes to gender inequality. In 2020, Bogotá implemented the CARE system in hopes of increasing agency for the women providing informal, unpaid care. To explain it plainly, the CARE system aims to provide care for caretakers. Today there are eleven of these “Manzanas del Cuidado” or CARE Blocks in the city. At each CARE Block, caregivers can access professional and skills training, wellness promotion, and income-generating activities.

This model is meant to lower the barrier to entry of public services by bringing them directly to those who need them most.  The services are located in existing infrastructure across the city in health centers, schools, libraries, etc. The sites were chosen based on the area’s demand for care, caregiver density, poverty, and participatory budgets. For those who cannot access a CARE Block, CARE Home Delivery and even CARE Buses have been implemented to provide access for even those in the most extreme circumstances.

Since 2020, the CARE System has provided over 160,000 services to caregivers across the metropolis. It’s clear that the program has directly impacted the lives of caregivers in a very personal way. However, the effect it’s having on the wider scale is less evident. CARE Blocks are challenging and shifting societal gender norms. Take the “CARE School for Men” for example. It aims to teach men the skills of care work and cultivate an appreciation for it. This solution is a perfect example of mainstreaming gender equity and Sustainable Development Goals into urban planning. The program works to reverse the conditions that have created women’s unfair burden of informal unpaid care work. It immediately increases their autonomy over their own income and time in the now.

This innovative solution to gender inequality is one of many examples presented at the international conference. MetroSolutions proves there is no shortage of creative solutions to today’s urban issues, but we must create a space to share them, learn from one another and finally, put these lessons into action.