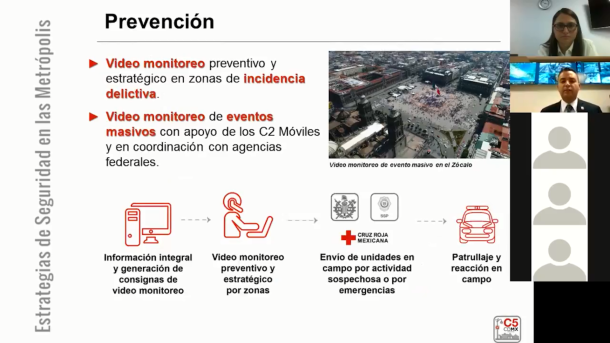 On April 25th, the team of Bogotá’s Veeduría Distrital led the first of a series of technical webinars. These online meetings facilitated by Metropolis serve to hold conversations on specific topics of metropolitan management and to exchange information on public policies among our membership. The first edition dealt with the theme "safety strategies", and counted on the participation of an expert from Mexico City, who shared his experiences in violence prevention, incident communication, emergency management and victim care.

The webinars led by Bogotá are structured in previous studies carried out by the Veeduría Distrital, entity that performs the role of preventive control body of the Colombian capital, and contributes to improving public administration processes, to developing a shared sense of responsibility towards public spaces and services among citizens, and to making better decisions based on transparent processes. Called "technical notes", the studies of the Veeduría show the panorama of determining issues in the development of the city, comparing data from Bogotá with data from other metropolises and providing diagnoses on management trends. With Metropolis webinars, Bogotá expands the scope of its technical notes, sharing its knowledge with the other metropolises of our association and with an international audience. The technical note that served as the basis for this first webinar was "The challenge of reducing the homicide rates in Bogotá", which addresses the security strategies implemented to achieve a decrease in the homicide rate in the city.

During the webinar, Alejandra León, professional delegate for the administrative efficiency of the District Supervisor's Office, highlighted actions carried out in Bogotá such as the renewal of the Metropolitan Police vehicle fleet to respond more efficiently to citizens' requests, and also the implementation of the most modern command and control center in the country (C4), which has allowed communication between the different entities involved and the implementation of the first video surveillance system in the city.

Guillermo Fernandez, Director of Operations of C5 in Mexico City (command, control, computing, communications and citizen contact center), highlighted among the main strategies carried out in his metropolis:

The guest from Mexico City expressed his gratitude for the opportunity to inaugurate this training activity and concluded: "Bogotá must join efforts through the exchange of statistics, strategies, technologies and policies implemented to promote decision making that will allow for the promotion of more efficient public administrations with greater benefits for citizens".

The webinar had 26 registered participants, some of whom actively participated by sending questions that were answered in real time by the representative of Mexico City and the representative of Bogota. If you have not been able to attend the event live, you can retrieve it on the YouTube channel of the Veeduría Distrital de Bogotá.

The next webinar led by Bogota should be held in September, and will focus on the theme of sustainable mobility. More information will be published soon in the Metropolis calendar.